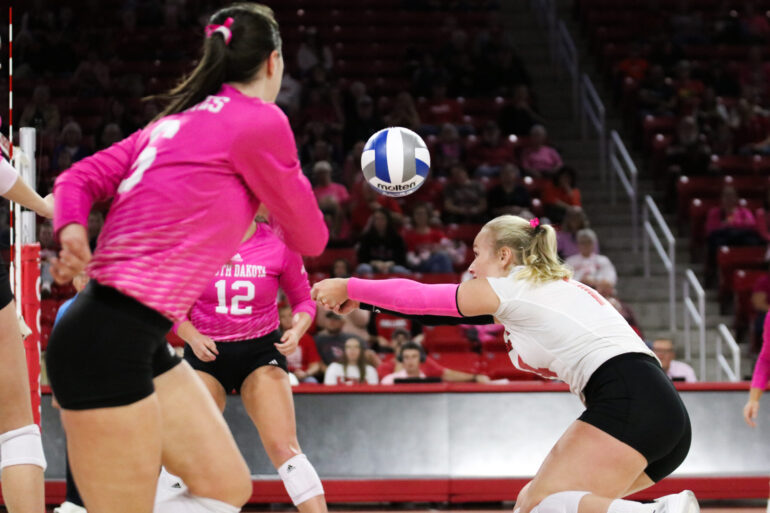 The South Dakota volleyball team hosted their southern-most rivals in the Summit League in Oral Roberts and Kansas City.

South Dakota had a record of 16-2 overall and 5-1 in conference play entering this week’s games.

“I think we came out with a lot of confidence. That is something we’ve been talking about; coming out with a strong start,” junior outside hitter Elizabeth Juhnke said. “We knew (Oral Roberts) had the ability to go on runs and they did that, but I don’t think that affected us tonight.”

The Coyotes were led by Juhnke who scored a game high 24 kills. She also had one assist, three total blocks and 11 digs. The 24 kills tied a program record for the most kills in a three set match.

Juhnke also reached 400 kills on the season for the third time in her career.

South Dakota out killed Oral Roberts 43 to 26. The Coyotes also had a better hitting percentage as they hit .290 compared to the Golden Eagles’ .097.

South Dakota then hosted the Kansas City Roos on Saturday in the annual Pink Match.

“I am really happy with our team’s performance today. I really felt like just from the start of the match even just before it in warm ups, they were just in a really good space,” South Dakota head coach Leanne Williamson said. “The energy was really good, the communication was really good and they were having a lot of fun and that’s where I think we play our best volleyball.”

Juhnke led the game in kills with 16. She also had two service aces, one total block and 13 digs. This was Juhnke’s 13th double-double of the season.

Harms reached double digit kills in this game as she put down 11. She also blocked six of the Roos’ kill attempts.

Kansas City junior outside hitter Odyssey Warren led them in kills with eight. Warren also had 10 digs and one assist.

South Dakota’s record moves to 18-2 on the season with their only losses coming from No. 4 Louisville and North Dakota State.

Their next games will be on the road against the Denver Pioneers (Oct. 20) and the Omaha Mavericks (Oct. 22).