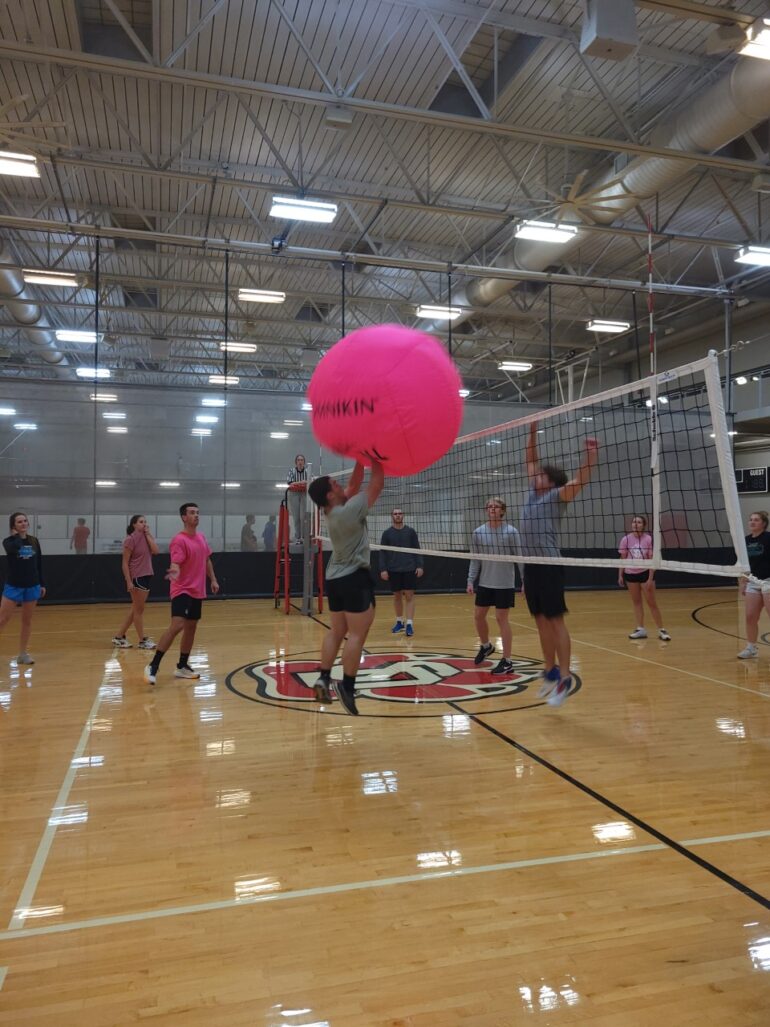 The Big Pink Volleyball Fundraiser returned to USD for its eighth year on Oct. 4 at the Wellness Center.

The event, organized by Connor Singhisen, assistant director of intramurals and clubs, called upon participants to deck themselves out in as much pink attire as possible. Singhisen said students, faculty, staff and community members participated.

The competition consisted of nine teams, Singhisen said, each with six players and each competing for the chance to win champion t-shirts.

“It’s more of a fun event, not a competition,” Singhisen said. “You can still definitely be competitive with it. If you’re competitive, you’ll find a way to make it happen.”

Singhisen said putting on an event like this is a collaborative effort between himself and the intramural programming part of the department.

The theme of Big Pink Volleyball doesn’t originate at USD as it started in the early 2000s at Western Illinois University as a fundraiser for breast cancer awareness research, Singhisen said.

“A lot of students didn’t realize the impact of their donations to the event, so we elected to change our approach to it and make sure we had an impact on the funds raised in the Vermillion community,” Singhisen said.

When one really feels connected to where their money’s going, Singhisen said, it’s a lot easier to convince people to donate.

This year the donations are going to the Vucurevich’s Children’s Center here on campus, Singhisen said.

“Through various conversations with people talking about needs in the community and what we could do to help benefit, it came up as a potential suggestion, so we reached out to them,” Singhisen said.

Singhisen said it’s gratifying to see the impact they have; kids can experience having new play items, new cots or new classroom materials.

Nolan Strand, a junior at USD as well as a scorekeeper and event facilitator of Big Pink Volleyball, said being a part of an event like this is rewarding.

“It’s good knowing that we’re going to be donating the proceeds to children in need,” Strand said.

Singhisen said they try to find a different cause every year because they don’t want to focus on just one area.

In years past, they’ve raised money for a young girl battling Leukemia, paid off student lunch debt at both elementary schools and covered the costs of two adult tricycles for Sesdac clients.

“It happens in October every year, so we’re looking forward to trying to find something to donate towards next year,” Singhisen said.

Singhisen said even if you’re not athletic, you can have fun and enjoy yourself while also participating for a good cause.