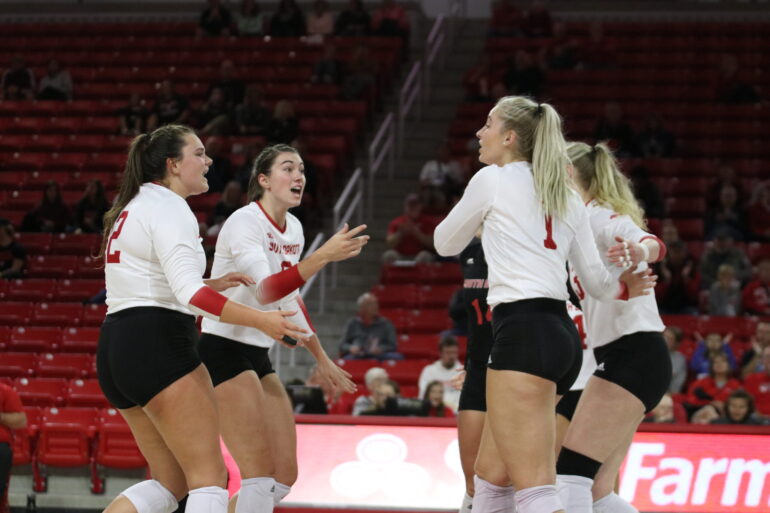 With two regular season games left, many teams are changing their focus to the Summit League Tournament in Omaha. Only six teams get into the tournament this year.

No. 1 South Dakota Coyotes: USD is 15-1 in conference play and 26-2 overall. Their games left include North Dakota State on Nov. 17 and North Dakota on Nov. 19.

South Dakota won the Summit League for the sixth time in seven years with their win against Oral Roberts on Nov. 12. The Coyotes sit with their almost perfect record of 26-2 on the season with their only losses to current No. 5 Louisville and Summit League rival North Dakota State.

South Dakota is led by junior outside hitter Elizabeth Juhnke who has set South Dakota records and also led the NCAA in kills all season. She leads the NCAA in total kills (600), kills per set (5.45) and total attacks (1464). Juhnke is also an eight time Offensive Peak Performer of the Week in the Summit League this season and back-to-back Summit League Peak Performer of the Month for the women’s side.

Fifth year defensive specialist Lolo Weideman leads the Summit League in service aces and total digs with 50 and 517, respectively. Weideman was given the honors of Defensive Peak Performer of the Week two times this season (Sept. 27 and Nov. 8). This was the second Coyote to be given the award, the first being junior middle blocker Madison Harms (Oct. 25).

USD will have a first round bye in Omaha as they will await the No. 4/No. 5 matchup.

The Maverick’s were last year’s regular season winners, but this season they have the chance to stay at No. 2 or drop to third or fourth position depending on how the final games in the Summit turn out.

Sophomore outside hitter Shayla McCormick leads the team in kills with 388. McCormick also sits in third place in total service aces with 40. McCormick was a Peak Performer during the week of Oct. 11, which was the first time she had been named to this honor throughout her career.

Junior middle blocker McKenna Ruch is in third place in the Summit League in total blocks with 128 on the season. Ruch is also the third leading killer on the team with 280. Ruch was named Defensive Peak Performer of the Week twice this season which was the fourth time of her career.

Omaha will need to win their last game against Denver and have North Dakota State lose one of their two games to clinch the two seed in the tournament.

The Bison were projected to be the seventh seed in the preseason polls but now sit in the third position They could potentially move to second or fourth depending on how the rest of the games end.

They started their non-conference schedule collecting three wins right away which is a fourth of what they were projected to win. Their losses in the non-conference consisted of Louisiana, UTRGV, Central Michigan and Austin Peay. As for Summit League play, the Bison won five straight games including a game against USD. North Dakota State’s losses in the conference were to North Dakota, Omaha, South Dakota State and Denver.

Tanchin and Hinze were named Offensive Peak Performers of the Week during Oct. 4 and Oct. 25, respectively.

The Bison can control their own destiny to the second seed in the tournament if they win both games against South Dakota and South Dakota State. However, if they only win one game, they will need to hope that Omaha loses to Denver.

The Pioneers were the projected No. 1 in the preseason polls but after a rough start to the season losing their first three games they are currently at No. 4.

The Pioneers have five players that have over 150 kills on the season with their leader being graduate outside hitter Jordan Lockwood with 279. Lockwood is inside the Summit League top 20 in service aces (15th), blocks (19th) and points (13th).

Senior middle blockers Cadi Boyer and Brianna Green were named Defensive Peak Performers of the Week on Sept. 6 and Sept. 20, respectively. Green leads the Summit League in total blocks and Boyer is fifth. Denver is the best blocking team in the Summit League as they have 479 in total. South Dakota is second with 397.

Denver can only get as high as the two seed but they need North Dakota State to lose both games and win their final game against Omaha to do so.

The Jackrabbits are where the preseason poll projected them to be as they sit in the fifth position tied with North Dakota but having the tiebreaker as they beat them earlier this season. SDSU’s non-conference schedule had them finishing 6-6 with wins over Northern Illinois, NJIT, Eastern Washington, Chicago State, Samford and Nicholls State. They lost against UIC, Eastern Washington, Jacksonville State, Iowa, Northern Iowa and North Florida.

SDSU is led by fifth year outside hitter Crystal Burk who currently sits at third in the NCAA in total kills with 497. Burk also leads the Jackrabbits in service aces, points and total attacks and is second in digs. Burk was also named the Offensive Peak Performer on Nov. 8.

Sophomore middle blocker Ella Thompson was named the Defensive Peak Performer on Nov. 15. Thompson leads the Jackrabbits with 10 solo blocks and second in total blocks with 80.

The Jackrabbits cannot go any higher than the fifth position but they can fall to the sixth spot if they do not win this weekend against UND and NDSU.

No. 6 North Dakota Fighting Hawks: UND is 9-7 in conference play and 12-15 overall. Their remaining games include South Dakota State on Nov. 17 and South Dakota on Nov. 19.

With a negative record in the non-conference schedule, North Dakota came into the Summit League season with a 3-8 overall record but thanks to a 9-3 start, they found themselves with a ticket to Omaha.

As mentioned earlier, South Dakota State holds the tiebreaker over the Fighting Hawks because of a game earlier in the season.

The Fighting Hawks are led by three players who have above 200 kills on the season including sophomore outside hitter Ashlyn Olson, junior setter Elizabeth Norris and graduate outside hitter Sierra Ward. Norris is also the team’s leading assister with 502 on the season.

Senior setter Kortney Carney has been Defensive Peak Performer twice this season. She has 393 digs on the season which is fourth in the Summit League. Carney is also the third highest assister on the Fighting Hawks with 158.

The Fighting Hawks will have to win the rest of their season to capture the fifth seed. However, they can’t go any lower than sixth.

The Summit League tournament will be in Omaha at Baxter Arena. The first round will be on Nov. 24 as the third and sixth seed will play at 4 p.m. and the fourth and fifth will play at 7 p.m. The first and second seeds will be awarded a bye and will not play until Nov. 25.