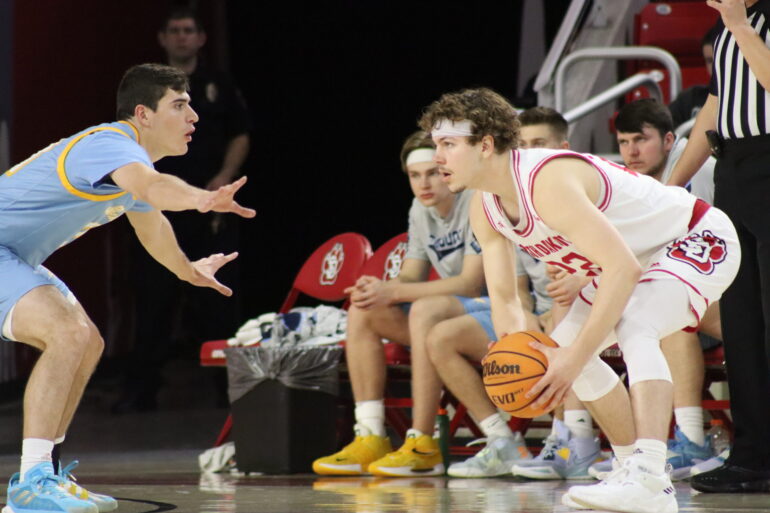 The Coyote men’s basketball team returned home for the first time in over two weeks to host the Mount Marty Lancers last night in a 97-58 victory.

For the Coyotes, this game counts toward their overall record, however it is an exhibition game for the Lancers since they came up from NAIA to Division-1 to face the Coyotes.

USD took the lead early on. They headed into halftime up 52-21 over the Lancers.

The Coyotes were led in scoring by junior forward Tasos Kamateros with 15 points. Kamateros went six for nine from field goal and three for four from three-point range.

The Lancers were led in scoring at half by freshman guard/forward Tash Lunday with eight points.

In the second half the Coyotes beat the Lancers in shooting 45-37.

The Coyotes were led in the second half by sophomore forward Mihai Carcoana with 17 points on perfect shooting (7-7 field goals and 3-3 from 3- point range).

“(Carcoana) is capable of shooting it. We were talking before the game and I was watching him play as a 16-year old in Romania and I was the only college coach at the game, and he had six threes in the game,” head men’s basketball coach Eric Peterson said.

The Lancers were led by senior guard Matthew Becker and sophomore forward Hunter Kotrous both having six points in the second half.

“It’s always good when you make shots. When you make 19 threes, coaching becomes a lot easier,” Peterson said. “But it was doing the simple things and the right things by making the right play that got us a lot of those open looks.”

The Lancers move on to face Midland University on Wednesday and the Coyotes will head back on the road to face BYU in Salt Lake City on Saturday.