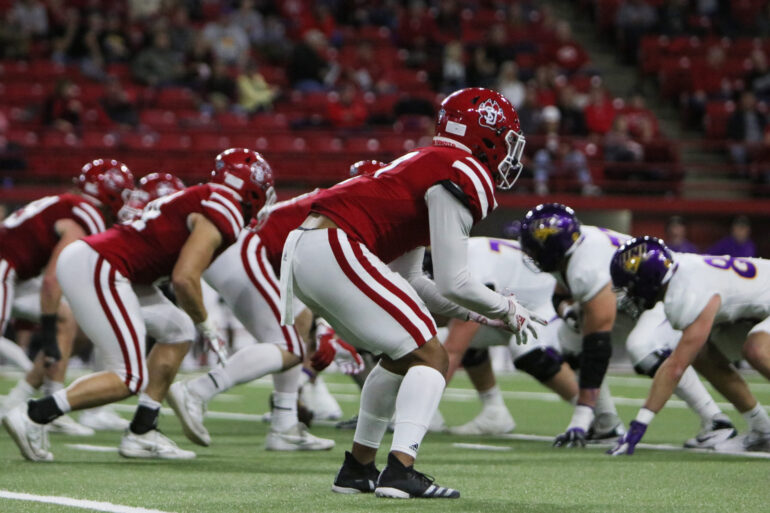 The Coyote football team hosted the Northern Iowa Panthers for their final game of the 2022 season, where they fell 58-14.

At the press conference after the game, athletic director David Herbster announced that he will be extending head coach Bob Nielson’s contract “for the foreseeable future.”

“We all believe in Bob and his ability to lead our team. That’s me, our president, this department, and this university. He’s won two national championships in his career, and we have three playoff appearances in the last 35 years here at USD and Bob is responsible for two of those,” Herbster said. “With our support, we know we can achieve our goals of winning championships.”

On the Coyotes’ opening drive of the game, they went three plays for eight total yards. Not able to get a first down, USD punted the ball to the Panthers who started their first drive on their 15-yard line.

The Panthers started their first drive with five passes by redshirt junior Theo Day. Day capitalized on the drive with a 7-yard touchdown pass to sophomore tight end Layne Pryor.

USD got the ball back and once again, went three and out and punted it back to Northern Iowa.

On the ensuing drive, Day found sophomore wide receiver Sergio Morancy on a 36-yard touchdown pass to put the Panthers up 14-0 with 6:33 left in the first quarter.

Again, South Dakota got the ball back and were not able to move it, as they got two yards on three plays and would have to punt.

The Panthers took advantage of the Coyotes’ punt and scored on another pass from Day this time to redshirt junior Sam Schnee for 36 yards. The Panthers lead extended to 21-0.

South Dakota got the ball back once again and had to punt for their fourth punt of the first quarter giving the ball back to the Panthers with 54 seconds left.

Northern Iowa drove all the way down to the Coyotes 3-yard line where Day scrambled into the endzone for his fourth touchdown of the day and put the Panthers up 28-0 with 14:15 left in the second quarter.

On the ensuing Coyote drive, redshirt freshman Aidan Bouman threw his first interception of the season to the Panthers’ junior defensive back Woo Governor who was tackled at the South Dakota 24-yard line.

UNI took advantage of the field position as redshirt senior running back Vance McShane ran it in for an 18-yard touchdown. This put the Panthers up 35-0.

On the kickoff, sophomore running back Travis Theis fumbled the ball at the Coyotes’ own 19-yard line which was recovered by the Panthers’ graduate defensive back Damien Crumitie.

Day capitalized once again on the field position with an 11-yard touchdown pass to senior wide receiver Quan Hampton to extend their lead to 42-0.

USD got the ball back on their own 9-yard line with 8:43 left in the second quarter. The Coyotes marched all the way down to the Panther 8-yard line where Bouman found tight end JJ Galbreath in the corner of the endzone for their first points of the day. The Coyotes trailed the Panthers 42-7.

On the ensuing Panther drive, Day threw another touchdown, this time to redshirt sophomore tight end Noah Abbott. This put the Panthers up 49-7 going into the half.

The Panthers received the ball coming out of the half and drove down to the Coyote 9-yard line. The Panthers were stopped however and that brought out junior kicker Matthew Cook who kicked a 26-yard field goal to extend the Panther lead 52-7.

South Dakota punted on their first drive of the second half giving the Panthers the ball at their own 34.

UNI drove down once again to the Coyote 19-yard line where they kicked another field goal by Cook with 5:01 left in the third quarter.

South Dakota started the next drive on their own 25 and drove to the Panther 42-yard line. They were unable to convert on the fourth down attempt which turned the ball over to the Panthers.

The Panthers moved the ball to the Coyote 20 and were stopped by the Coyote defense. This brought out Cook for his third field goal try of the game, this time from 37. Cook’s field goal was good, moving the Panther lead to 58-7 with 14:04 left in the fourth quarter.

Bouman answered the Panther field goal with a rushing touchdown of his own from the Panther 1-yard line. This was Bouman’s second touchdown of the game, shortening the gap to 58-14 with 9:18 left in the fourth.

Neither team was able to score the rest of the way. The Panthers defeated the Coyotes 58-14 on the Coyotes’ senior day.

Bouman threw the ball 33 times completing 20 of his passes for 132 yards with a touchdown and an interception. He also rushed the ball four times for negative four yards and a touchdown.

The Coyotes’ redshirt freshman running back Shomari Lawrence had 14 carries for 95 total yards.

Day finished the game 21 of 30 on completions with 380 passing yards and six total touchdowns. He also finished with six rushes for 17 yards.

McShane carried the ball 14 total times for 91 yards and a touchdown. Morancy caught four passes in the game for 135 yards.

South Dakota had 236 total yards on the day compared to the Panthers’ 593.

The Coyotes finished their 2022 season with a 3-8 overall record and 2-6 in the Missouri Valley Football Conference.