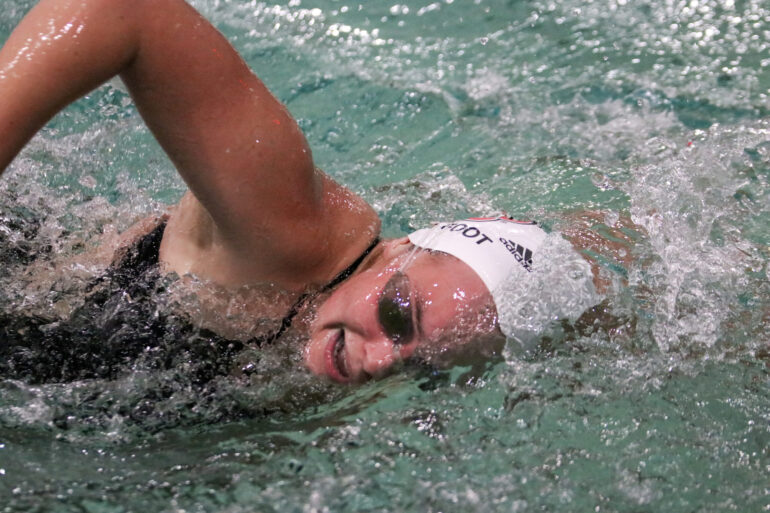 The Coyote swim and dive team was in Sioux Falls this past weekend as they competed in the three day Augustana Invitational at the Midco Aquatic Center.

The first event of the weekend, the women’s 200 medley relay, had two Coyote teams take podium spots. Freshmen Tatum O’Shea and Taylor Buhr along with fifth year Cassie Ketterling and sophomore Christina Spomer took the top spot with their time of 1:42.02. This time set a new South Dakota school record. The other podium team was made up of freshmen Grace Schultz and Carson White, senior Skylar Welle and sophomore Sara Mayer who took third place with 1:43.05.

In the men’s 200 medley relay, the Coyotes finished first and second as seniors Mack Sathre and Zachary Kopp combined with sophomores Adam Fisher and Jack Berdahl to take the top spot and senior Aidan Gantenbein and juniors Parker Sonnabend, Grant Wolner and Caden Feit took second with their times of 1:26.72 and 1:29.61, respectively. Sathre, Kopp, Fisher and Berdahl’s time set a school record as well.

The women’s 500 yard freestyle had freshman Camilla Brogger-Andersen finish in first place with her time of 4:55.29. Junior Maria Mattaini finished fourth in this event as she clocked in at 5:02.55.

Sophomore Emily Kahn did something no other female Coyote has ever done and broke the 23 second mark in the 50 yard freestyle with her time of 22.68. She finished second and teammate Spomer finished fourth with 23.10.

Kopp broke another school record with his time in the 50 yard freestyle of 19.81. He is the first male Coyote to ever finish below 20 seconds. Fifth year Alec Thomas and Sathre finished fourth and fifth, respectively.

The Coyote men also captured two of the top podium spots as Sathre touched the wall first with his time of 1:48.84 and Sonnabend finished in third with 1:50.63.

Fisher also broke a school record in the same event with his time of 48.27. Freshman Jacob Ketterling and Wolner finished third and fourth with their times of 48.77 and 48.87, respectively.

The relay team of O’Shea, Brogger-Anderson, sophomore Skyler Leverenz and Kahn finished in the top spot in the women’s 800 yard freestyle relay as they touched the wall with a time of 7:29.75.

The men also finished in first with their time of 6:43.74. The team consisted of Mes, Thomas, Sathre and Gantenbein.

In the women’s 3 meter diving, junior Stella Fairbanks took the top spot when she scored 269.45 points. Junior Kayla Middaugh finished in second with 259.30 and freshman Mady Schmidt in fourth with 236.45.

The Coyotes’ combination of Kahn, Cassie Ketterling, Leverenz and Spomer finished in second place in the 200 yard freestyle relay as they touched the wall at 1:32.89. Brogger-Anderson, Mayer, Schultz and White finished in fourth with 1:34.56.

Both sophomore Mairead Powers and junior Maddie Grant cracked the top five in the women’s 400 yard IM. Powers finished in second with 4:34.65 and Grant in fifth with 4:39.27.

Brogger-Anderson captured her second first place of the three-day event in the women’s 200 yard freestyle. She touched the wall at the 1:50.05 mark. Kahn also finished in the top with her time of 1:52.41, making her fourth.

Thomas was the only Coyote to finish in the top five as he finished in first in the men’s 200 yard freestyle with 1:39.04.

Four different Coyote men finished in the top five with Wolner as their best finisher with his time of 54.59, placing him in second. Berdahl, Sathre and Sonnabend finished third, fourth and fifth, respectively.

In the women’s 100 yard backstroke, O’Shea touched the wall first with a new school record time of 54.99. Schultz finished in fifth with 56.10.

Fisher and Kopp found their way into first and second in the 100 yard backstroke. Fisher finished with 48.12 and Kopp with 49.59.

O’Shea, Buhr, Cassie Ketterling and Kahn finished in first in the women’s 400 yard medley relay with their time of 3:44.34. This time was a South Dakota school record. Schultz, Welle, Mayer and Brogger-Anderson finished in fifth with 3:49.69.

The men’s 400 yard medley also set a school record with a time of 3:14.44 set by Fisher, Berdahl, Sathre and Kopp. Gantenbein, Sonnabend, Wolner and Thomas also grabbed the last podium spot as they finished in third with their time of 3:20.76.

Fairbanks finished in second in the 1 meter diving with her score of 245.75. Schmidt finished fourth with 229.65.

In the men’s 100 yard freestyle Thomas and Conner got into the top five with Thomas in second with 44.76 and Conner in fourth with 45.70.

In the women’s 200 yard butterfly, the Coyotes had three swimmers in the top five with Cassie Ketterling leading the way with her second place time of 2:06.17. Mayer finished in fourth with 2:09.58 and senior Maddie Katz in fifth with 2:10.44.

Two Coyote teams finished in the top five in the women’s 400 yard freestyle relay. O’Shea, White, Brogger-Anderson and Kahn finished in first with their time of 3:23.08. Leverenz, Spomer, Schultz and sophomore Shannon Banark got fifth when they touched the wall at the 3:30.14 mark.

The Coyote men’s 400 yard freestyle relay team set a school record as Kopp, Thomas, Fisher and Sathre touched the wall at the 2:57.59 mark. Conner, Mes, Wolner and Sonnabend finished in fourth with a final time of 3:03.70.

South Dakota’s next event will not be until 2023 when they host St. Thomas on Jan. 20. This will be their Senior Day.