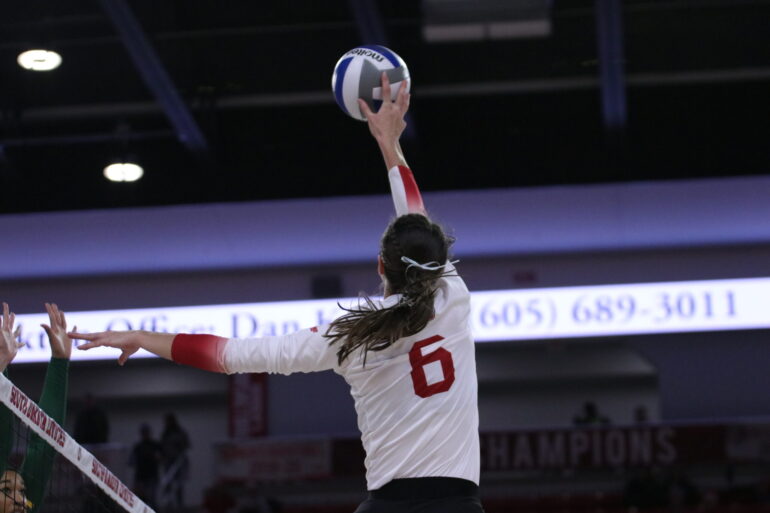 The volleyball teams took on both North Dakota schools last week in their final two games before the Summit League Tournament.

On Thursday, the Coyotes took on North Dakota State where they fell 1-3. USD was able to redeem themselves on Saturday at their senior day where they swept North Dakota 3-0.

The Coyotes have lost to the Bison both times they have played them this season, and those have been USD’s only losses in conference play.

NDSU won the first set in a narrow victory 25-23. The last three points scored for the Bison, that allowed them to pull ahead, were from a service error by junior defensive specialist Alaina Wolff and two attack errors by junior outside hitter Elizabeth Juhnke.

The second set had a much bigger margin with NDSU winning 25-17. The Bison went on a 6-0 run early on in the match to put them up 10-4. The Coyotes were unable to battle back after that and NDSU ended the match with three kills and an attack error from the Coyotes.

At the 19-11 mark of the second set, sophomore outside hitter Kylen Sealock entered the match and saw the first extended playing time of her career. She continued playing in both the third and fourth sets as well.

The third set gave the Coyotes some hope with a 25-13 win. Sealock had four kills and two blocks in the third set.

The fourth set mirrored the first in a narrow victory for the Bison 25-23. The last six points flipped back and forth between the two teams until NDSU ultimately won out due to an attack error by the Coyotes.

Juhnke led the Coyotes on Thursday with 21.5 points, 18 digs and 19 kills. She was followed by Sealock who had 16 points on the night along with 14 kills, three blocks and three digs.

The Coyotes then took on North Dakota on Saturday for their senior day where they celebrated outside hitter Aimee Adams and defensive specialist Lolo Weideman.

The first set finished with the Coyotes on top 25-12. USD was able to go on a 7-0 run early on to establish a 16-6 lead. The Coyotes finished the set with their last two points coming off a kill by junior middle blocker Madison Harms and a block by Harms and Sealock.

North Dakota battled back in the second set for a narrow loss of 25-22. The final point of the match was made from a kill by Adams.

The final set finished with the Coyotes sweeping the Fighting Hawks 25-19. USD went on a 6-0 run late in the set to put themselves ahead 20-13. Adams once again finished the set with a kill giving the Coyotes the win.

Juhnke once again led the team in points with 17. She had 15 kills on the night, making her the Summit League’s single-season kills record holder with 634 kills this season.

The two USD seniors, Adams and Weideman, also contributed to the win. Adams had seven kills and the highest attack percentage with .500. Weideman had 13 digs in her final regular season game.

The Coyotes are now heading to the Summit League Tournament in Omaha over Thanksgiving break. They will be playing on Friday against the winner of No. 4 Denver vs. No. 5 SDSU at 4 p.m.