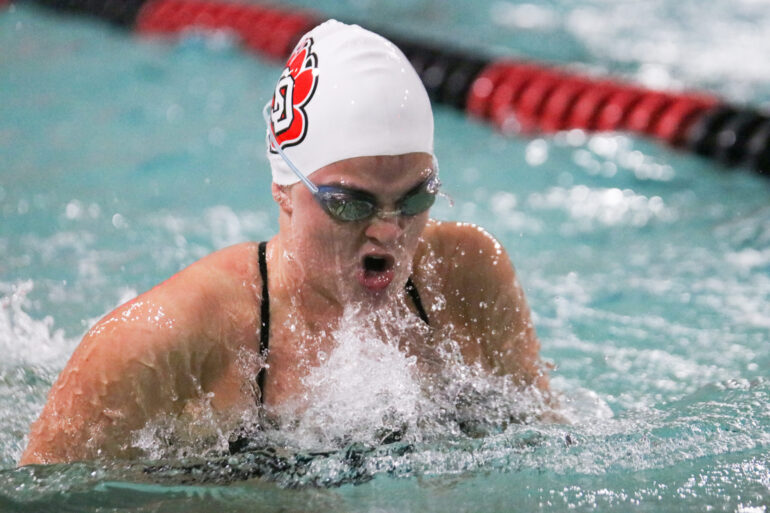 USD swim and dive hosted the Coyote Extravaganza this past Friday and Saturday in Sioux Falls.

The Coyotes had 18 first place finishes in the two-day event; 13 from the women and five from the men’s team. Head coach Jason Mahowald also won his 150th career dual meet.

The first day of competition began with the Women’s 1 Meter Diving event. Junior Stella Fairbanks finished in first followed by junior Kayla Middaugh in second with her personal best. Sophomore Samantha Mersnick placed fifth in this event which made her ninth on the Coyote all-time charts.

The USD women then competed in the 400 Yard Medley Relay, where the USD team consisting of freshmen Tatum O’Shea and Taylor Buhr, fifth year Cassie Ketterling and sophomore Emily Kahn placed first with a final time of 3:53.53.

Junior Keegan Henning rounded out the podium with a third-place finish in the Men’s 1000 Yard Freestyle.

In the 200 Yard Freestyle, freshman Camilla Brogger-Anderson finished with a time of 1:54.77 landing her in first place for the women and fifth year Alec Thomas finished in second for the men.

The women had two podium finishes in the 100 Yard Butterfly starting with Ketterling in first with a time of 56.70, followed by sophomore Sara Mayer in second. Gantenbein also came in second in the same event for the men.

Kahn received her first individual first place finish of the two-day event in the Women’s 100 Yard Freestyle with a time of 51.62.

In the Men’s 100 Yard Backstroke, Fisher came in second place.

The second day of competition began with the Women’s 3 Meter Diving event in which Fairbanks placed first with her season best of 284.70 points. This score was also an NCAA Zone Qualifying mark.

The women’s 200 Yard Medley Relay team consisting of O’Shea, Ketterling, Buhr and Kahn came in third. Gantenbein, Sathre, Berdahl and Kopp were on the men’s team that placed second and they were followed by Fisher, Sonnabend, Thomas and sophomore Dylan Purrington in third.

Brogger-Anderson finished first in the Women’s 1650 Yard Freestyle with a time of 17:52.32. Henning came in third in the men’s event.

In the 50 Yard Freestyle, Spomer placed third for the women and Kopp placed second for the men.

Buhr finished first in the Women’s 100 Yard IM, making her No. 8 in the Coyote all-time charts. She was accompanied by teammate Ketterling on the podium at third. The men also had two podium finishes in this event. Sathre came in first with a time of 52.62 and Sonnabend finished 0.8 seconds behind in second.

In the Men’s 100 Yard Freestyle, Thomas finished in second with a time of 46.39. In the Men’s 200 Yard Backstroke, Gantenbein came in second.

Henning won the Men’s 500 Yard Freestyle with a time of 4:50.92. Buhr won the Women’s 200 Yard Breaststroke with a time of 2:23.14. These were the last two podium finishes for the Coyotes in individual events.

The Coyotes’ next meet will be Nov. 17-19 again in Sioux Falls, this time for the Augustana Invite.