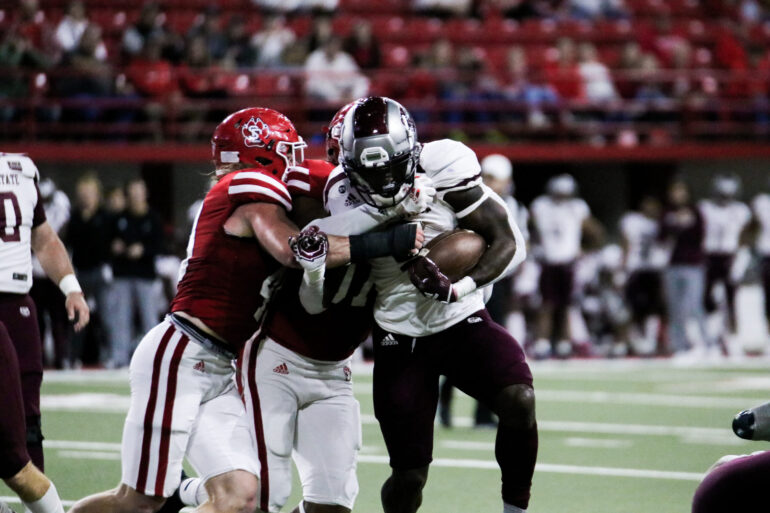 The Coyotes defeated Missouri State (20-13) at the Military Appreciation game on Nov. 5.

South Dakota came into the game with a 2-6 record after losing to Youngstown State last week (24-45).

Missouri State entered the Dakota Dome with a 3-5 record after beating Western Illinois (64-14) at their homecoming game. The Bears came into the game with playoff hopes if they could win their last three games.

On the first drive of the game, sophomore running back Travis Theis fumbled the ball and it was recovered by Missouri State’s redshirt junior cornerback Jamal McMurrin.

After the fumble recovery, the Bears started their drive at the Coyote 45-yard line. Missouri State was stopped short of the end zone and elected to take a field goal to get ahead 3-0.

The Coyotes answered back on the ensuing drive as redshirt freshman running back Shomari Lawrence found the back of the end zone after an 11-yard touchdown run which put the Coyotes up 7-3 heading into the second quarter.

After the teams traded punts, South Dakota got the ball back with 3:39 remaining in the first half. Redshirt freshman Aidan Bouman led the Coyotes to a 68-yard touchdown drive, capping it off with a 44-yard connection to junior wide receiver Wesley Eliodor to put USD up 13-3 after a missed extra point.

The Coyotes entered the tunnel with a 13-3 lead at halftime.

Bouman threw for his second touchdown of the day to sophomore wide receiver Carter Bell for a 22-yard score putting the Coyotes up 20-3.

Missouri State answered back on the next drive when senior quarterback Jason Shelley connected with junior wide receiver Naveon Mitchell for a 4-yard touchdown to start the fourth quarter making the score 20-10 USD.

The Bears got the ball back with 5:56 remaining and drove into field goal range where junior kicker Jose Pizano made his second field goal of the day to make it a one possession game, 20-13 USD.

The Coyotes were unable to drain the clock, giving Missouri State an attempt to tie the game with 1:37 remaining. The Bears were only able to pick up 19 yards before their drive stalled out and they turned the ball over on downs.

Bouman kneeled the ball twice to run out the clock as the Coyotes picked up their third win on the season, beating Missouri State 20-13.

Bouman ended the day with 235 yards and two passing touchdowns.

Junior linebacker Brock Mogensen led the team with 13 tackles in the win.

As for Missouri State, Shelley passed for 233 yards and a touchdown. He also picked up 16 yards on the ground. Mitchell had four catches for 28 yards and the Bears’ lone touchdown on the day. McMurrin ended the day with three tackles, one tackle for a loss, a forced fumble and a fumble recovery.

Missouri State moves to 3-6 on the year and falls out of playoff consideration. The Bears will go back to Springfield next weekend for their senior day where they’ll face Youngstown State on Nov. 12.

South Dakota moves to 3-6 on the season and will hit the road to face North Dakota on Nov. 12 in Grand Forks.