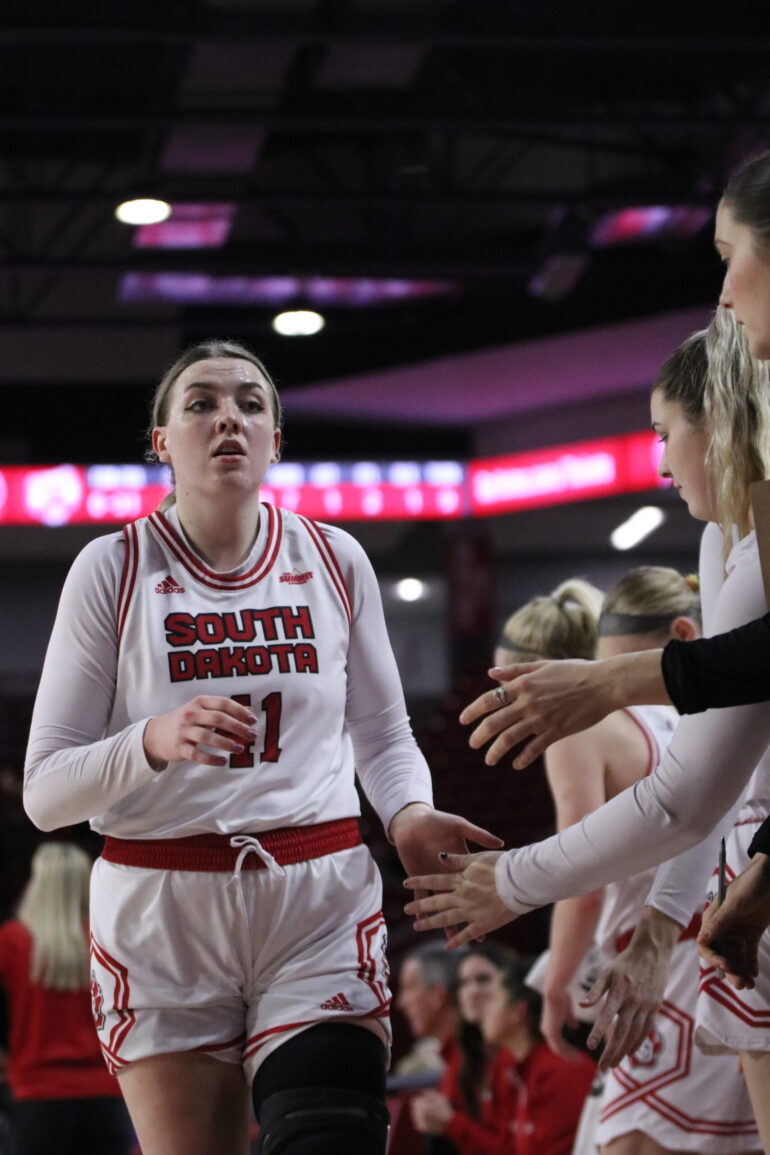 “I was very open in my recruiting process,” Hempe said. “I had lived in Virginia my whole life so I kind of wanted to go to a school outside of Virginia.”

Hempe’s recruiting process led her to the University South Dakota which is over 19 hours away from her hometown in Virginia.

“I had no idea I would end up going somewhere so far from home, but South Dakota heavily recruited me at the time, and it just felt like home when I first stepped on campus,” Hempe said.

Traveling 19 hours from home was not an easy decision but the support at home made it an easier decision, Hempe said.

“I’m very close with my family and they were very supportive of my decision,” Hempe said. “I would not feel comfortable going to a school so far away from home without their support.”

In her first two seasons at South Dakota, Hempe played in 28 games averaging 2.5 points per game, 1.1 rebounds, two blocks and one steal.

Last year Hempe missed the whole season after tearing her ACL for the second time.

“I just tried to do everything I could last year to prepare myself for this year,” Hempe said. “I honestly just missed playing basketball. I am just happy to be healthy and playing again.”

“I was a little anxious when the coaching change was happening. You just never know what is going to happen in those situations,” Hempe said. “We just tried to stick together as a team and continue to work out on our own together…. All of the returning players just took it day-by-day and trusted they would bring the right coach in.”

A few weeks later, the wait was finally over for the players, as South Dakota introduced their new head coach, Kayla Karius.

“When they told us they had picked a coach we all just sat in our locker room waiting, which felt like we were sitting there forever,” Hempe said. “When we saw Coach (Karius) and her family walk in, we were all just so happy to see a familiar face. I was very happy when I saw her walk through the door.”

Karius was an assistant coach for USD under Plitzuweit from 2016-2018. Karius then spent time on Wisconsin’s and Drake’s coaching staffs.

“Most of us knew Coach Kayla or were recruited by her in some way,” Hempe said. “When I committed to USD, she was still a coach here, but she left before I came to USD, so I never got the chance to play for her.”

Hempe has started in every game this season under Karius. She is averaging 10.1 points per game which is second among active players on the team, as well as 3.9 rebounds per game.

The Coyotes wrapped up a four-game road trip that ended on Dec. 2 against Northern Colorado. South Dakota is currently 4-4 on the season and returned to the Sanford Coyote Sports Center (SCSC) yesterday (Dec. 6) for the first time since Nov. 16.

“We have had a stretch of away games and traveling so we are all excited to play on our home court again,” Hempe said. “There is nothing like playing in the SCSC with all of the fans. The fans make it even more special to play in the SCSC.”