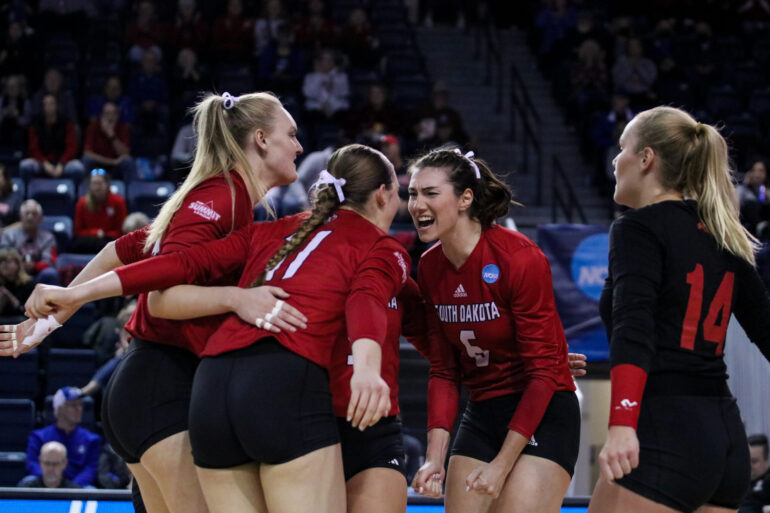 Set one saw a tightly contested matchup all the way up until the Cougars went on a 6-0 run to go up 14-5.

The teams went back-and-forth until junior defensive specialist Laura Petterson kept the Coyotes in the game late with two service aces cutting the Cougar lead to 23-13. The Petterson aces were not enough as the Cougars went on to take set one 25-14.

The second set, neither team was able to separate from the other by more than five points until Houston had a late 3-0 run in the set. Houston won set two 25-19.

South Dakota started set three with a 4-1 run with two kills coming from junior outside hitter Elizabeth Juhnke. South Dakota pushed their lead in the set to eight points as they led Houston 17-9 and junior middle blocker Madison Harms put down her third kill of the set.

The Coyotes won set three 25-18. This is the Coyotes’ first set win in program history in the NCAA Women’s Volleyball Tournament.

Houston replicated the success that the Coyotes had in the third set as they went on a 6-1 run to start the fourth set. USD cut that Cougar lead down to one as they trailed 7-6, with Juhnke responsible for three of the Coyote points.

Houston once again went on a long run in the middle of set three pushing their one point lead to a 14-7 lead over the Coyotes. South Dakota battled back to tie the game at 17.

During the South Dakota run, Juhnke went down with a left leg injury at the 15-11 mark. She did not play the rest of the game and was taken via ambulance to a local hospital for imaging.

“Winning those two sets meant the world to me as a senior and us never accomplishing that until this year meant a lot,” fifth year senior defensive specialist Lolo Weideman said. “We’ve had some experience in the NCAA Tournament but this year was definitely memorable and I think it just shows how much each year we’re progressing as a program.”

In the fifth set, Houston kicked it off with a four point run. South Dakota tied the score at the 10 point mark by a kill from senior outside hitter Aimee Adams. Houston finished the game on a 5-1 run to win the fifth and final set.

As for South Dakota, Juhnke led the team in kills with 17. She also had an assist, a service ace, 11 digs and three blocks. Harms also had double digit kills with 11 and six total blocks in the contest.

South Dakota hit at a .200 compared to Houston’s .282. The Coyotes had more blocks than the Cougars, 12-8. This was the only statistical category USD won.

South Dakota’s volleyball season ends with the loss to Houston in the first round of the NCAA Tournament. They went 29-4 on the season with their four losses coming from No. 4 Louisville, North Dakota State twice and No. 23 Houston.

As the Coyotes move into next season, they will lose two seniors, Adams and Weideman.

“There might be a little bit of extra motivation here moving forward of we’re this close now what do we have to do and what are those changes we have to make to take that next step,” South Dakota head coach Leanne Williamson said.