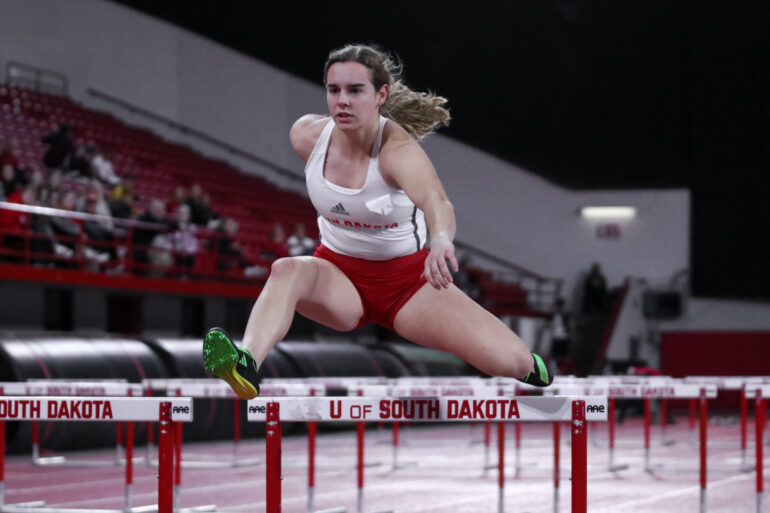 The Coyotes track and field team hosted their first indoor meet of the 2023 season in the South Dakota Kickoff. The teams that made their way to Vermillion were Wayne State, Midland and Morningside.

USD took the top four spots in the women’s 60 meter dash as sophomore Erin Kinney took the top spot with her time of 7.43. This time, as well as her 7.40 prelims time, broke the DakotaDome record which she previously held from last season. Kinney was followed by sophomores Jacy Pulse and Averi Schmeichel plus junior Hannah Young, in that order.

Kinney and Young also took the top spots in the women’s 200 meter with Kinney placing first with her time of 24.41.

Pulse followed up her second place finish with a top spot in the women’s 400 meter run as she clocked in a time of 58.17. Pulse was followed by fellow Coyote sophomore Caelyn Valandra-Prue.

In the women’s 600 meter, the Coyotes took the top two spots as sophomore Sara Reifenrath crossed at the finish line with a time of 1:36.56. Junior Madison Jochum crossed in second with her time of 1:37.32

South Dakota took the top spot in the women’s 4×400 meter relay with their time of 4:00.58. The team consisted of Schmeichel, Pulse, Jochum and Valandra-Prue.

Sophomore Danii Anglin took the top spot in the women’s high jump as she cleared the height of 1.82 on her second attempt. Junior Carly Haring finished in second as she cleared 1.72.

South Dakota was the only team to compete in both the men’s and women’s pole vault. Sophomore Marleen Mülla vaulted the highest of the women with her height of 4.30m. On the men’s side, junior Marshall Faurot jumped the highest with his vault of 5.05m.

Junior Meredith Clark had the best South Dakota finish in the women’s shot put with her throw of 14.95m. Junior Lydia Knapp finished in third with her distance of 13.25m.

The Coyotes captured every spot on the podium in the men’s 200 meter. Freshman Mark Daley crossed the finish line first with his time of 22.21. Kautz and Adegbite crossed right after Daley with their times of 22.62 and 22.85, respectively.

Sophomore Thomas Nikkel finished in first place in the men’s 400 meter with his final time of 51.82. Freshman Henry Grayson finished in fourth place with a time of 52.65.

In the men’s 600 meter, Sophomore Dylan Blake was the only Coyote to compete and crossed the line first with his time of 1:22.94.

Sophomores Luke Olson and Brendan Scott finished in the top spots with their times of 2:02.09 and 2:03.38, respectively.

In the 1 mile run, sophomore Riley Ruhaak grabbed the top spot with his crossing time of 4:29.24. Sophomore Jarek Glenn and freshman Seth Fey also finished in the top five in the event.

Sophomore Hugo Morvan was the highest placing Coyote as he placed second in the men’s 60 meter hurdles with his time of 8.23.

Two Coyote teams placed first and second in the 4×400 meter relay. The team that finished first consisted of Olson, Morvan, Daley and sophomore Thomas Nikkel. They crossed the finish line with their time of 3:25.78. Team two consisted of Scott, Minkovski, Grayson and Inlay as they crossed at 3:26.22.

In the men’s high jump, four Coyotes placed in the top five. Sophomore Joe Lynch placed the highest of any Coyote in second place with his height of 2.04m. Following Lynch was senior Jack Durst, sophomore Ethan Heitman and freshman Landon Olson, respectively.

The Coyote long jump team replicated what the high jump team did in their event as sophomore Jayden Green finished in second place with his height of 7.05m. Green was followed by freshman Bennett Schween, junior Sage Hagen and sophomore Alex Brown.

Senior Jackson Coker threw the second furthest in the men’s shot put with his distance of 17.05m.

Freshman Quincy Warren secured the final podium spot with his throw of 16.99m. Warren was followed by sophomore Wyatt Pruce who threw 16.97m.

Overall, the Coyotes secured 19 wins to kickoff their indoor season. Their next event will be Jan. 20 in the Power River Dual hosted in Gillete, Wyoming.