A rainbow of colored powders, water guns and traditional Nepali and Indian snacks drew students from all walks of life to the Holi festival on Wednesday afternoon.

Holi, a Hindu festival, was hosted for the second year at USD by the Nepalese Student Association (NSA) on the lawn behind Patterson Hall.

Yuzina Subedi, the program coordinator for NSA and a sophomore business major, said the Holi festival celebrates the arrival of spring and victory over evil. She said the event is popular because of its appeal to people from many cultures, even though the festival is commonly associated with India and Nepal.

“I am a Hindu, and the majority of people in Nepal are Hindu, and same with India, so usually they started this festival as a Hindu festival, but it’s not just that… It’s so influential that many different countries celebrate it. I had a friend from Morocco and she told me that even they celebrate that festival,” she said. “Everyone enjoys it, and it’s also a different kind of festival; it doesn’t happen on campus in the MUC ballroom where you just sit and eat and there are different performers, it’s not one of those. It’s outside; everyone gets to run around with colors and water and you just can go crazy.”

The event was free and open for all students and faculty in order to cultivate a welcoming environment, Subedi said.

“That’s the entire thing about Holi, you just got to get together, everybody and whoever you know, to celebrate and just enjoy and just have fun,” she said. “It shows how we accept everybody… I don’t think anyone would be comfortable charging money to attend Holi because it’s supposed to gather everybody. It’s a very welcoming event.”

Students who happened to be walking past the event also stopped to join in.

“There were so many students that showed up, even when they were passing by and they saw us they just decided to join,” Subedi said. “Ask anybody, even if they are just walking by, call to them and ask them to celebrate, just to show them how we celebrate back home, at least a glimpse of it.”

Ghofrane Baaziz, a junior majoring in media and journalism and an exchange student from Tunisia, said she originally decided to attend the festival because of prodding from her friends.

“To be honest, my friends kind of dragged me here, but it’s an amazing event, with all the colors and everyone is happy and dancing and it’s just so cheerful,” Baaziz said. “USD is not very exposed to different cultures and stuff, so it’s nice that they introduce the Holi festival, especially since it’s a very sacred holidays for Hindus.” 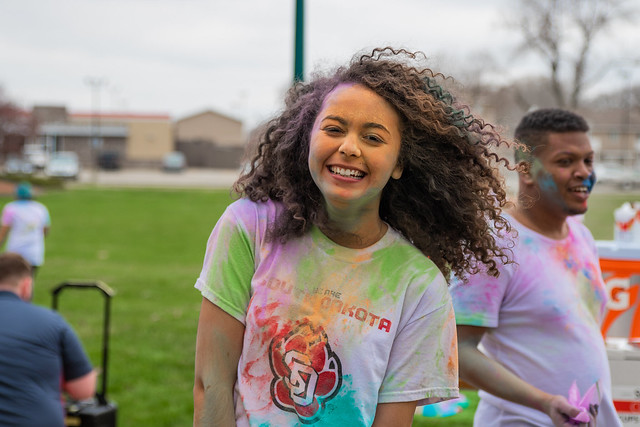