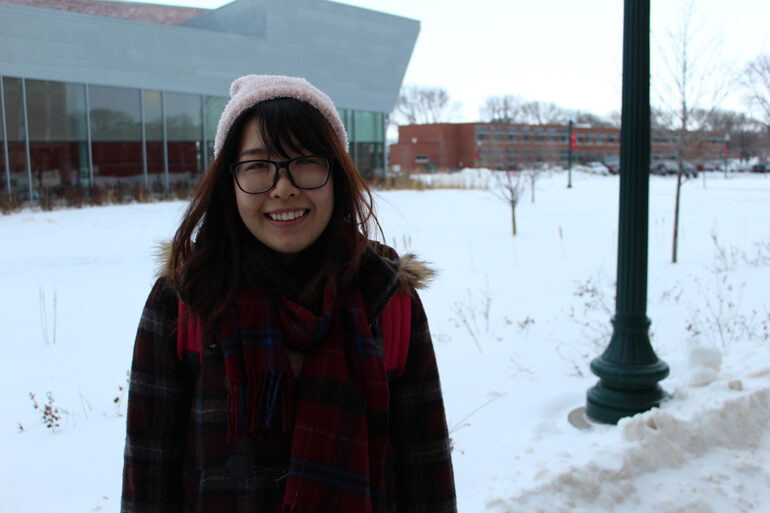 Campus
April Zhang, a new transfer student from China, arrived on campus Jan. 5. She had never seen snow before, so the experience was exciting for her. Josie Flatgard / The Volante

Among the list of official documents, immunizations and fees, some international students choosing to attend USD have another thing to keep in mind – the cold weather.

Thirty-one new international students began their time at USD at the start of the spring semester.

One of those students, junior April Zhang, had been studying in Hawaii for a year before deciding it wasn’t the right fit for her. She said she wanted to find a new place to experience while furthering her education.

“Everybody hear(s) that I transfer from Hawaii and they’re like, ‘What, why here?’” Zhang said.

The average temperature in Hawaii is about 68 degrees Fahrenheit. Zhang said she’s never experienced a winter quite like the cold in the Midwest.

“Since I’ve never seen snow before, it was actually exciting at the beginning,” she said. “Yeah, I think it’s still pretty exciting, like, when it’s snowing and it’s fresh and new.”

International student advisers, like Patrick Morrison, help students transition to South Dakota. One of his duties is to provide students with a description of Vermillion.

“We let them know that you might have to drive an hour to the nearest airport or to the mall, but then it’s also an incredibly safe community, very walkable, no pollution,” Morrison said.

Upon arriving at the beginning of January, the students were able to get acquainted with campus and the climate early on.

“(Jan. 7) was our orientation, and I think that weekend it got to like, 20 below as I recall, so that was sort of unique,” Morrison said.

The students were able to catch a ride to Walmart so they could purchase cold weather accessories they may have still needed. A trip to Sioux City is planned for students who would like to shop for winter weather clothing elsewhere.

Anudeep Ballu, a graduate student, arrived for the semester well prepared for the winter weather. Though this is his first time in the U.S., he ordered winter gear while he was still home in India.

Ballu said there was a snow storm the day after he arrived, which was far different than what he was used to.

“I easily adjusted because I saw the worst in the beginning,” he said.

Ballu said he finds Vermillion peaceful compared to the busy business-style of Pune, India, where he most recently worked.

Sophomore Gawain Williams, who’s originally from Jamaica, arrived in the fall of 2014 to start his collegiate athletic career in track and field. He has since then slowly grown accustomed to the much colder weather of South Dakota.

“I had my shorts, my shirt and it was pretty nice until November hits, and you’re like, ‘What in the world is this?’ I hated it. I really, really hated it for the first couple of months,” Williams said.

Williams said he basically had to build up his wardrobe from scratch.

“Usually you get in front of the mirror (and think), ‘Like do I look cool enough in this outfit?’ Now you have to be thinking, ‘Am I warm enough?’ “ he said.

Among his other college prospects were ones in Florida, Connecticut and South Carolina. He said he was encouraged to look at those because they would offer similar weather to what he would be used to in Jamaica.

In his time at USD, Williams said he’s grown to like South Dakota and its people, and almost prefers the weather here to that of home.

“I took a blind leap of faith and I ended up here, in the middle of nowhere, because nobody in Jamaica knows where South Dakota is,” Williams said.