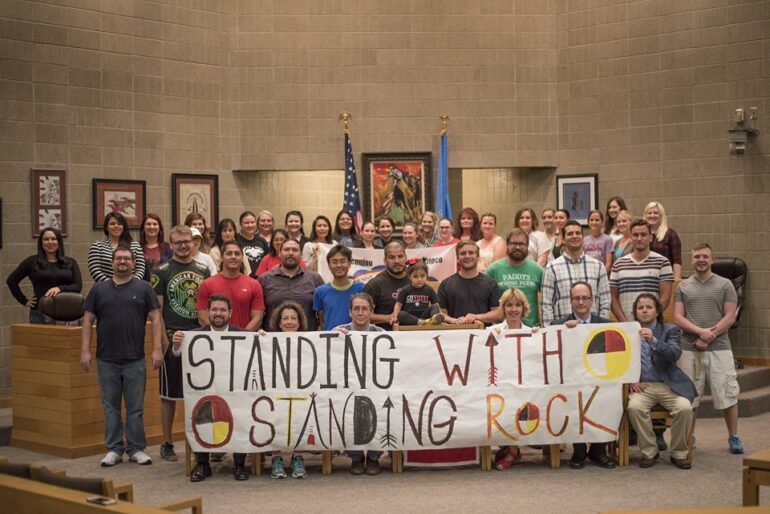 Opinion
The student involvement at the Standing Rock protests demonstrates the potential young people have to make a difference. Cheyenne Alexis / The Volante.

Amidst the ongoings at Standing Rock, the number of campers coming to the site have been said to be up to 7,000, representing over 250 nations. With the numbers of individuals who voice their support at an uncountable number and growing, at this point, people can’t hide from or ignore activist messages. A simple glance over social media shows that activist articles and posts are unavoidable as everyone discusses the opinions and stances on issues they care about.

The media acts as an outlet that can provide information to the world, but the process of changing things in the world happens first with changing the grassroots contributors. As students, youth and people, we have an inherent obligation to lend our voices to the voiceless. Martin Luther King, Jr. once said that injustice anywhere is a threat to justice everywhere. This phrase is nothing but a modest but crucial call for action.

How does society give and use its collection of unique voices? Where does the process begin? The answers are more simple than previously imagined, considering the popularity and variety of social media platforms available. Activism has become much simpler and more approachable. The only tools necessary to start spreading knowledge about important issues is as simple as one click on a smartphone screen. This includes anything from commenting, retweeting, reblogging and posting. Most students are likely passionate about at least one issue, so it’s important to use available resources to educate others.

College students are the next generation driving change and making decisions. Sooner rather than later, we will quite literally have to choose how we want the future to unfold. Famous thinker Georg Wilhelm Friedrich Hegel said, “We learn from history that we do not learn from history.” Some may wonder how the issue of the Peaceful Protectors Camp in Standing Rock has become so large in its numbers of those who visit the camp and the many more who support the movement through social media. The most important answer is found when examining the missing link that’s the heart of this specific movement, something that hasn’t been seen on such level or in such a massive scale: unity.

Unity is the glue that is holding this movement together. It has created a space to build the capacity for open-hearted conversations within thousands of people across every part of the country and places all over the world.

What we are seeing here is other movements using their platforms to support and promote the Standing Rock movement to essentially protect drinking water in the Midwest, and arguably drinking water everywhere. Through unity found in activism, young people have the potential to make an enduring statement and call to action. If every societal problem received the same attention as the Standing Rock movement, this millennial generation will undoubtedly become a force to be reckoned with. With social media, anybody can speak out and start meaningful campaigns. The best time to join forces to benefit the greater good is now.