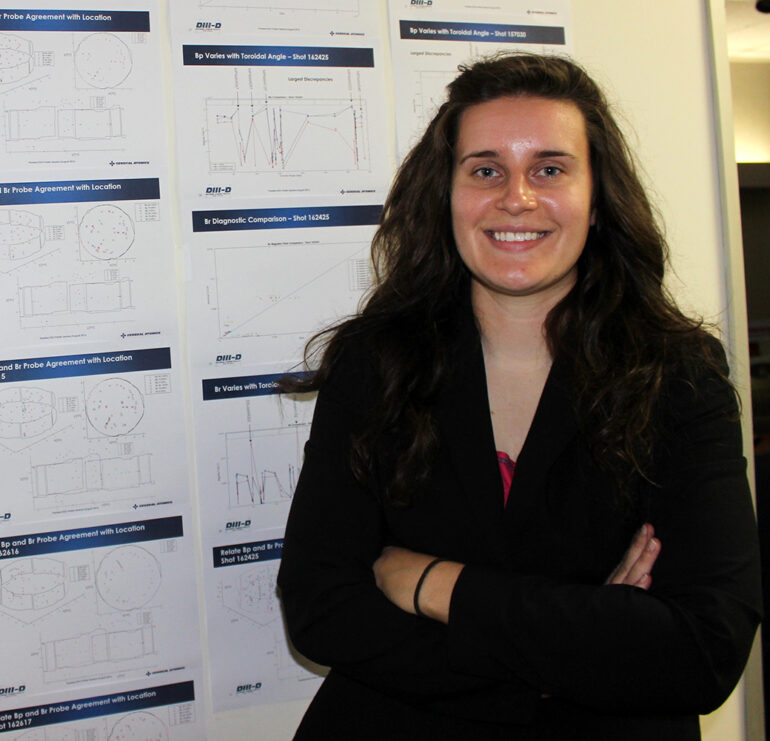 This past summer, USD graduate student Riley Paulsen travelled halfway across the country to participate in a prestigious and competitive internship funded by the Department of Energy.

Pinsker said students from across the nation apply online for this internship. The first cut is made in Washington and then said send the remaining applications to the first or second choice labs indicated on the application. From there, the LEDs pick from those and then make offers to the students that are good matches.

Paulsen said she had applied for a lot of different internships because she wasn’t sure what direction she wanted to take her career.

“I was shocked, I guess,” Paulsen said regarding when she learned she got the internship. “I was sitting in class when I got the email and I assumed it was a rejection.” When she realized it wasn’t a rejection, Paulsen immediately called her mother to share the news.

The internship started at the Princeton Plasma Physics Laboratory where all of the plasma physics students took an intensive course on plasma physics for one week.

After completing the course, the interns went on to their separate laboratories. Paulsen and nine other students were part of the lab at General Atomics in San Diego. Each student was paired with a research mentor and was given a project the mentor had prepared which had to be accomplished in the nine weeks they were there.

General Atomics was founded in the late 1950s to find peaceful uses of atomic energy. They are contracted with the Department of Energy to work at the DIII-D, the nation’s largest magnetic fusion energy facility.
buy neurontin online https://www.parkviewortho.com/wp-content/languages/new/prescription/neurontin.html no prescription

DIII-D is a tokamak, a device used in thermonuclear fusion and research.

Scientists have been trying for years to develop a practical way to generate electricity through nuclear fusion, the same type of reaction that powers the Sun. It’s believed that if nuclear fusion is ever mastered, it would be a major solution for cleaner energy production worldwide, because of the massive amount of electricity that could be generated by the process.

Pinsker said General Atomics has been doing internships for so long that they see second- and third-generation students returning as interns. Their lab has about 10 students, compared to 50 or more student interns at other labs.

Paulsen’s project at General Atomics was an extension of the ongoing research that they are conducting with “magnetically confined fusion,” a nuclear fusion process that’s currently being studied. Her work was computational — she constructed an algorithm to calculate the magnetic field throughout DIII-D and to compare those calculations to experimental data from the diagnostic equipment and to isolate the largest sources of disagreement.

“Ultimately the goal was to determine how well the correction coil geometry has been understood up to this point,” Paulsen said.

Because scientific endeavors are often a team effort, Pinsker admitted that student interns typically don’t discover anything completely on their own, but rather they work together with fellow scientists to achieve big things.

“In one summer a student can move one block onto the great pyramid,” Pinsker said.

Paulsen said the internship was challenging because “there was a real learning curve to not only plasma physics itself but I was also using a couple programming languages that I wasn’t familiar with.” In general, Paulsen said it helped her “learn how to learn at an extensive rate.”

The internship wasn’t all work, however. Paulsen said one of her favorite days was when her and some of the other students went to Mexico for a day off.

As for Paulsen’s future, she’s currently working toward her Ph.D. in materials chemistry at USD. After that, she hopes to work in science policy or academia.