Diversity
Visiting assistant professor Travis Letellier speaks about the economics of "The Wizard of Oz" at the Black History Month kick off event in the MUC Pit Lounge Feb. 1. Cheyenne Alexis / The Volante

The “road of hope” is the theme for USD’s 2017 Black History Month events. A number of organizations have helped with planning,
including the Union of African American Students, the USD Student Activities and other volunteers in the Center for Diversity and Community.

The kick off event began Feb. 1 in the Muenster University Center, with various mini exhibits featuring artwork and posters of historical black figures that showcased the many faces of African American culture. 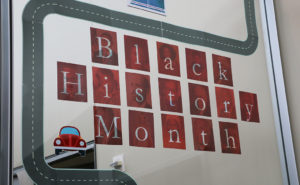 The theme for this year’s Black History Month events is “A road to hope.” Cheyenne Alexis / The Volante

Following that hour-long event was a presentation by visiting assistant professor Travis Letellier of the economics of “The Wizard of Oz.” Finally, the ending of the kick off event was the 1978 movie “The Wiz” starring actors such as Diana Ross and Michael Jackson.

Another event includes open mic night on Feb. 8, which Marcus Destin, president of the Union of African American Students, said he’s most excited for. The event will be held in the CDC this year.

There will also be a Bingo celebration Feb. 21 in the MUC and an event in March that explores the fine arts in black culture with various speakers and performers.

Destin said the entire month of January was a busy time setting up for February’s events, but he had quite a bit of help from people in the CDC.

“It is a team thing,” he said. “We have the beautiful people who are always in the CDC, they help us, they give us ideas. It’s just a family thing. I think that’s the best way to explain it.”

“There’s a lot of history to be learned,” Tran said. “The message is that the celebration of Black History Month is that we are here and we value diversity and inclusive excellence practices and it doesn’t mean that you have to identify with a certain community in order to put on an event. I’m looking forward to a great month, but also the rest of the year.” 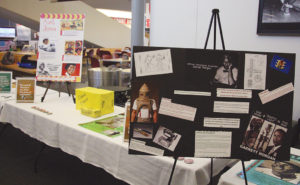 The exhibition for the Black History Month kick off event had posters created by students that featured historical black figures in America. Cheyenne Alexis / The Volante

Destin said the Union of African American Students hopes to showcase the month as open events for everyone to join in.

“One of the things that has to be put in the air is that the Union of African American Students is not just for African American students,” he said. “It’s not about being a group just for us. It’s about educating others as well as educating ourselves, as well, on the different cultures and heritages we have in our group. That way, if we’re educated, we’re no longer ignorant and we can go ahead and spread that awareness, spread the love, spread the joy and just be inclusive to everybody.”

Ti’Esha Jones, secretary of the Union of African American Students, said one of the biggest challenges was planning events that would attract an audience.

“Sure, it might tailor to the people in the group, but we’re already in the group. We want to reach out to students outside of our organization,” Jones said. “You have to tailor events so everyone’s
having fun.”

“I think it goes back to, when you think of the word ‘ignorant,’ you think of it as an insult. Most do. Ignorance is just not knowing,” Destin said. “I think it’s important to educate the people and it’s important to let them know what’s going on. We have to not only educate everybody else, but we have to let ourselves know the importance of being black and strong and independent and proud of our people instead of quiet when you think of cities
like Vermillion.”

“Inclusive excellence is great, I’m all for it, but the first thing I think of when I think of Black History Month is black excellence,” she said. “Just in general, I feel like often black people are talked about in a negative connotation. Some often say we’re lazy… physically we haven’t been documented as the most attractive race. I feel like I love myself more in this month than any other month of the year. It’s a time of
self acceptance.”

Black History Month at USD, Tran said, is imperative because the topics discussed, such as race, can be challenging.

“To put on programming for the entire community that may not have been exposed or understand is a strategic opportunity,” Tran said. “How can you educate, celebrate and also support? I look at it like this is an opportunity to create change and this is the perfect place to do it. The people who are involved in planning Black History Month 2017 are the people that are in it for the right reasons and I couldn’t be more proud.”

Destin said hosting the events, especially open mic night, will give non-black people a new perspective on why Black History Month is important.

“It’s more than just George Washington Carver, Rosa Parks and Martin Luther King, Jr. There are more black people than those people,” Destin said. “I think we’re one of the most resilient races there are. It’s our month. We want to educate you, reach out and we want to let you know this is what we’ve been through, you can do it, too. I hope we’re not the only ones celebrating.”