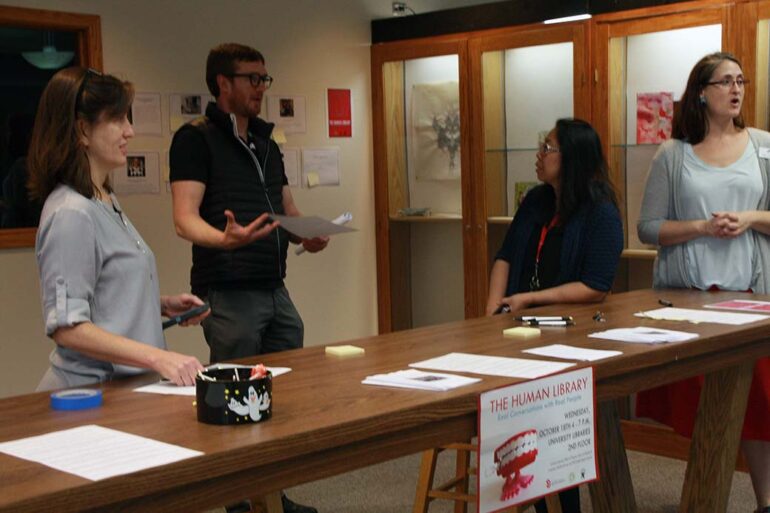 On Wednesday night in the I.D. Weeks Library, students were able to browse and explore a Human Library. During this event, “readers” could check out human “books.”

About 30 students, staff and faculty were in attendance.

The event served as a forum, where readers could ask their “books” questions.

The Human Library event featured speakers with diverse topics, so no “book” had the same story. Topics included personal life stories through the lens of mental disabilities, religion, gender, sexuality and race.

Megan Street, a former Volante staff member, was one of the nine “books.” Their story mainly focuses around coming out to a conservative, religious family.

One major element of Street’s story was feeling safe while being in the midwest.

“I have rainbow buttons on my backpack, so every time I walk out of my dorm I think about how 22 trans people have been killed already, and it’s October,” Street, a senior anthropology major, said. “And I ask myself: Could I be number 23?”

Street spoke about how coming out in the midwest can be difficult, and how connecting with the rural LGBTQ+ community is important.

“It’s very difficult,” Street said. “But there are rays of sunshine in all of this. You have Spectrum here on campus, which has been amazing. You have online communities, and it’s so much easier to find people out there who feel exactly like yourself.”

Dyanis Popova, an assistant professor within the division of curriculum and instruction, was among the rentable “books.” She spoke of her identity struggles as an immigrant to the United States, and how they’ve impacted her perspective as a woman of color.

“I never saw myself as black until I moved here,” Popova said. “There were all these things you were supposed to know, and now that I’ve done a graduate degree and I’ve learned a lot of history, I totally understand why that was that way, but it’s still kind of a struggle.”

Popova’s “book” describes dealing with microaggressions of racism against her and her family. She said her experience in the United States has brought forth tension for how she views herself.

“I have two different identities,” Popova said. “I have my American face identity and the way I see myself.”

Caroline Anderberg, an assessment, diversity and research services librarian, organized and coordinated the Human Library event on campus. She said even though readers may not share experiences with their books, they can empathize.

“In general, the climate of the country and the world for the past year or so lends itself for us to see where we intersect and what we have in common,” Anderberg said. “Even though we may have differences, our stories can enrich each other’s lives.”