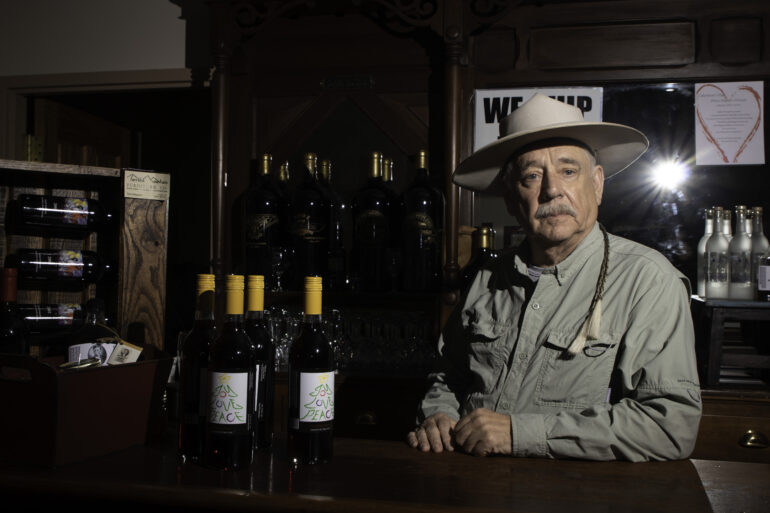 Around Town
Eldon Nygaard, owner of Valiant Vineyards, wrote new legislation in 1996 that allowed for the ownership of wineries in South Dakota. Aaron Mercado | The Volante

In 1996, Valiant Vineyards became the first commercial winery in South Dakota, and calls Vermillion its home.

“We started the winery because Sherry, my wife, is from California,” Eldon Nygaard said. “We had noticed in California an acre of grapes those days were about $16,000 for that land when our land back here in South Dakota was selling for $500 an acre. So we realized that the highest and best use in the right areas could, in fact, be raising grapes to make wine.”

Eldon Nygaard said they did research at South Dakota State University and joined the Minnesota Grape Growers Association to learn more about making wine. They then planted a test vineyard to make sure the grapes work.

“Then it dawned on us that there was no legislation that allowed me to have a winery,” Eldon Nygaard said.

Before the Nygaards opened their winery, there was no legislation in South Dakota regarding commercial wineries, so the couple had to write the bill to make it possible.

“My wife and I wrote the Farm Winery Act in 1995 and brought it to the legislature in ‘96,” Eldon Nygaard said. “It was passed into law, signed by the governor and then after July 1st, when it became law, by then we completed all the federal and state licensing, the requirements, and became the first winery.”

The bill passed 67-to-3. During that time, Eldon Nygaard worked as a professor in the political science department at USD, and he said his background helped make the process of creating legislation easier. A few years later, he served in the South Dakota Senate from 2011 to 2013.

Valiant Vineyards served as South Dakota’s lone winery for three years until two more opened their doors. Now, Nygaard said there are about 31 licensed wineries in South Dakota, 19 of which are commercial wineries.

Since the opening of the winery, Valiant Vineyards has expanded into a bed and breakfast, and four years ago, they started a distillery.

“South Dakota has the capability, I think, to become a leader in the Midwest in making, for example, whiskey,” Eldon Nygaard said. “Because we grow corn, wheat, rye, barley, all the ingredients are here in South Dakota. It might be even easier to grow a spirits industry like whisky, vodka.”

Eldon Nygaard said they have also opened another winery just outside of Hill City, S.D.

Adrienne Lewis, events coordinator at the winery, said they also hold many events like weddings, birthdays and the Great Dakota Wine Fest.

Lewis said she’s been working at Valiant Vineyards for 18 years, so it’s been exciting for her to see the growth of the winery.

“Just having a newer industry in South Dakota, a local industry with local products, is important to me,” Lewis said. “Seeing them start the new winery in the Black Hills and I’m also really excited for the whiskey when that becomes released.”

Nygaard said the winery really started out as a hobby that just got out of control along the way.

“It’s been fun being able to develop the industry and sell wines in other places,” Nygaard said.