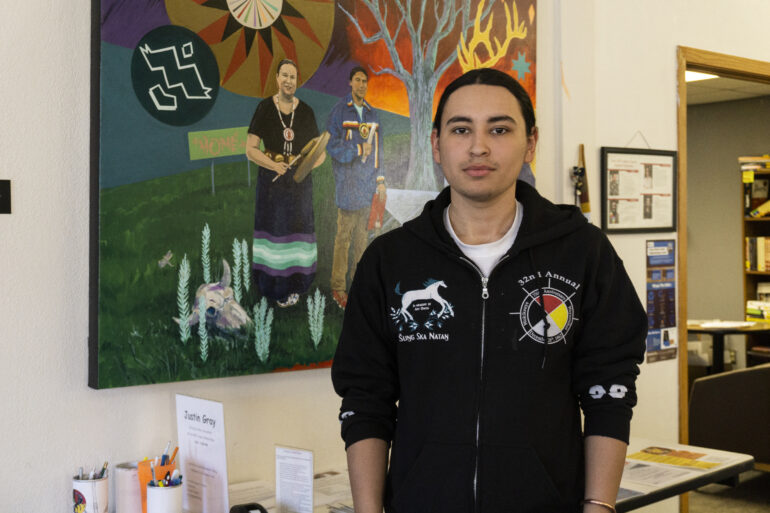 Editor’s Note: The Volante staff updated this article as of March 25, 2022 in order to correct misinformation presented in 2019.

“Things that are mainly in the sphere of Dakota people,” Mani said. “Their experiences, the past, and the future that we share. My work is under the umbrella of being a Lakotan but also putting aspects of me that are …or being Meshika which is Aztec.”

Mani is a senior fine arts major with an emphasis in painting. Aside from his academic emphasis, Mani has used other forms of art like sculpturing, mixed media and digital media to discuss issues that matter to him, immersing his audience in Native American past and present.

“My practice is a socially engaged practice that investigates contemporary Native issues,” he said.

Mani said the main things he focuses on include the incarceration rate of Native Americans, police brutality and sexual assault of Native peoples.

Mani said the forceful taking of Native children out of their homes is also an injustice he informs others on.

“Each year South Dakota gets a sturdy balance of $56 million just for childcare for Native children, yet South Dakota pays the least amount for foster care providers, pieces of training and provisions for proper childhood development,” he said. “The allocation for each child is about $79,000 a year, but the child might only get $20,000 to help them.”

Mani’s last project looks at the sterilization of native women.

“From the 1950s up to the 90s, the United States government had a policy of sterilization for people of color. In all of the United States, you also have native women who are forcibly sterilized (through oophorectomy) but it’s in a different manner than the other groups, where for native people it was through the Indian Health Services (IHS),” he said. “This was happening to girls from age 13 to 26, their prime audience.”

Mani said the oophorectomy procedure was usually carried out on the girls without consent or by giving misinformation of the effects and dangers of the procedure.

“And they will just add on those procedures without telling the girls, or they will give them misinformation, such as ‘this is reversible, if you want to have kids we can reverse it.’ Oftentimes this was not the case,” Mani said. “The most important part is that they were targeting full-blooded native women. Strategically, eliminating the population as a race.”

Mani said these issues are not only isolated to South Dakota but are present in states that have a bigger population of Native Americans.

Mani went to the Indigenous Peoples March in Washington D.C., which led to a feature in Teen Vogue.

“Going to Washington D.C. and talking about missing and murdered women, sterilizations and all the different ways that we have survived. That no matter what was given to us we are still surviving because of those reasons,” he said.

In the summer of 2018, Mani and a fellow artist made an eight-foot tall, nine-ton limestone sculpture to commemorate the history of boarding schools in Morris, Minnesota.

Mani said that doing talks at different places has been another way of him informing people about these issues.

“I have done talks at the Rap State at Fergus Falls, Rosebud, University of Minnesota, USD on different issues, and it’s just bringing that research into light and having other people be knowledgeable to it,” he said.

Mani said he starts his projects with research and then he begins making them.

“When I hear about something happening in our community, I research it to the full extent that I can, then I make a painting or a sculpture or a video that embodies that topic, or I will make multiple things, and then I go out to share it as much as possible,” he said.

With the belief that education is key in shaping people, Mani plans to get a Dakota language certificate and then solidifying his academia with a masters in fine arts.

“Through education, I think that you can really help people start to move towards understanding, rather than just giving people things on walls in a gallery, I think you can move into a lot of areas like the classroom, conferences or doing community-based artwork like murals,” he said.

Mani, along with other fine arts seniors, will be showcasing their works in an exhibition at the John A. Day Gallery on April 19.