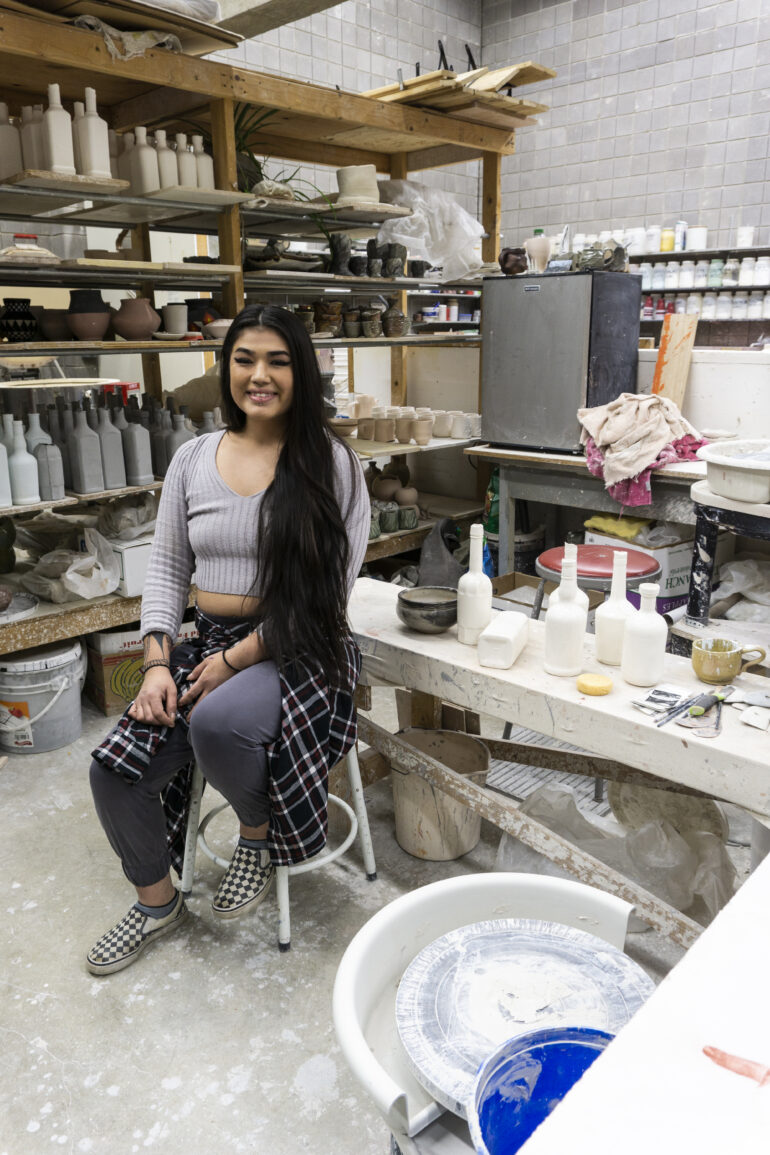 Diversity
Liz Skye, a senior studio art major with an emphasis in ceramics, is using bottles in her most recent artwork to bring attention to Missing and Murdered Indigenous Women, Girls, & Two-Spirit (MMIWG2). The Volante | Meghan Mount

Skye is an indigenous woman from Sioux Falls, S.D. who grew up in Wisconsin. She is a senior studio art major with an emphasis in ceramics at USD. She said she’s been interested in art since she was young.

“I think as an indigenous person, art is just inherently synonymous with life, so you want to make things look beautiful and you don’t exactly know it’s art when you do it,” Skye said. “Later, I realized going through western education what art is identified by their terms, and then I started realizing that I was unconsciously making this kind of art.”

Her latest body of work, “Unbottling Injustice: Missing and Murdered Indigenous Women, Girls, & Two-Spirit (MMIWG2),” is the beginning of the series on display in the Stilwell Exhibition.

Part of the inspiration for the project came from her unfulfillment with “just making pretty pots,” her inspiration from other indigenous artists and her desire to highlight the issue of MMIWG2, which doesn’t receive much media coverage.

“One day I was thinking really hard about the art and the issues… nobody was talking about (MMIWG2) at that time,” she said. “Back then, it was something that was really frustrating for me because a Native American transgender woman was just murdered in Sioux Falls during that time, and her name was Jamie Lee Wounded Arrow.”

Skye’s project involves creating ceramic liquor bottles and placing images of the missing and murdered indigenous people on the bottles.

“I decided that the liquor bottle was, and has been, a very comprehensive, all-encompassing sort of symbolic vessel for colonialism,” she said. “Think about how alcohol was brought by European settlers and introduced into these Native American communities. It bled into every single aspect of their life… then that went into abusive tendencies and addiction. All these other areas and aspects that are affected by drinking that keep indigenous people from continuing their traditions and being healthy-minded to combat the effects of colonialism and the trauma of it.”

Skye places an image of a missing or murdered person on each bottle and includes their story in order to humanize each person and bring them back to life.

“I compared it to how the American local law enforcement would just slap a picture of a child on a milk carton, send it out, and that was their way of searching for this child or raising awareness,” she said of the images. “I guess it was pre-Amber Alert, but still, it sort of reminded me of the sort of blase way that law enforcement handles these cases. Obviously, we can go into the fact that there’s racism involved, prejudice and things like that, but besides that point, I wanted to make the notion that they’re not being handled as carefully, as diligently and as thoughtfully as they should be.”

Skye noted a majority of MMIWG2 cases, if they are reported, aren’t followed up on. Her project brings up the underlying issue of colonialism in these cases.

“A lot of times the cases, if they are reported and followed up on, it’s very lazily, it’s very poorly, they don’t do much to investigate,” she said. “I want to do that with these (bottles), but I also want to do it in a critical way to talk about the issue that is underlying with all of these cases.”

Skye said she wishes to make as many of the bottles as she can in a year. She’s started by making six prototypes, on display in the Stilwell Exhibition. Now she’s contacting the families of the missing and murdered, asking for their photos, ceremonial names and personal stories.

When Annita Lucchesi visited campus this fall, Skye had the chance to meet her and learn more about her project of mapping the missing and murdered. Now, Skye is a fellow for the Sovereign Bodies Institute, assisting with data visualization for Lucchesi’s database of MMIWG2.

“She’s tracking and logging all of these cases better than the FBI and law enforcement… Meeting her was probably one of the highlights of my 2018 year,” Skye said. “Just creating artistic renditions that are critical sort of deliverables that we can share with other indigenous communities and non-indigenous communities that need to hear about this.”

Inkpa Mani, senior painting major, is a close friend of Skye’s and share similar themes in their artwork. Mani said he appreciates Skye’s passion in her work, which comes from a “very emotive place” in her.

“We have similar themes that play through our work like aspects of injustice or inequality or racial issues being Native people in the Midwest,” Mani said. “She’s very well-read, she understands the viewpoints emotionally, but also she has a critical eye and lens of understanding the social issues.”

Mani also appreciates her knowledge of the MMIWG2 issue and said he sees her latest project as very approachable and accessible to most people.

“She’s Standing Rock and she’s Oglala and she comes from Sioux Falls, so she has a really good insight into understanding that the missing and murdered issue doesn’t just happen on the reservation although it is highlighted as a reservation issue,” he said.

Cory Knedler, chair of the art department, knows Skye best through the Oscar Howe Summer Art Institute at USD. Skye came in as a high school student and now is a counselor at the institute.

“It’s geared towards getting high school students, specifically Native American students, into a college setting for art,” Knedler said. “In that institute, Liz showed great talent right from the start. It’s great to have counselors like Liz who can talk with the students and inspire the students through her art, through her poetry and through all the words that she has to say.”

Skye said the most important thing she wants people to know about her is that she loves her people.

“I think that if anybody on campus or if any of my fellow classmates knew anything about me, it would be that to always remember to remember indigenous people in every aspect, in every discipline. It’s important,” she said. “I think that people forget us, and in order to progress as a society, we have to start healing and mending those relationships with indigenous people that come in almost every discipline.”