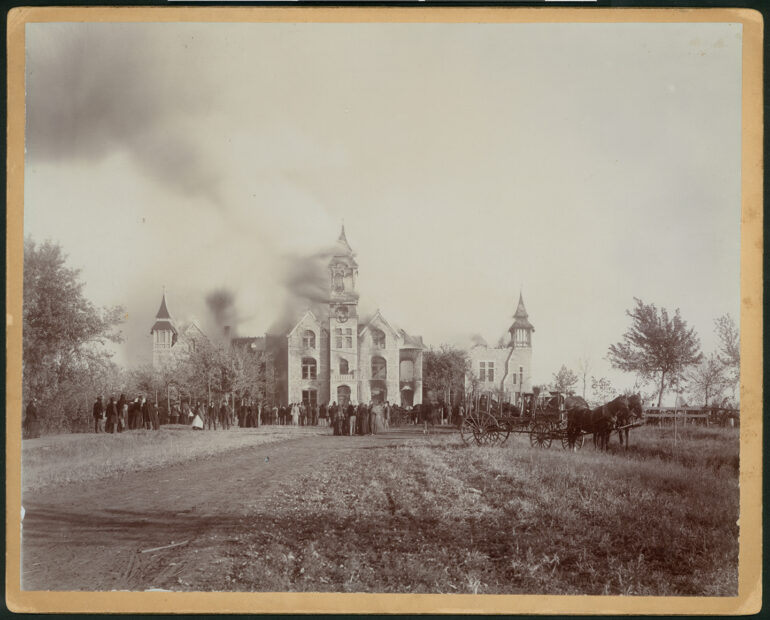 The Vault
University Hall (now Old Main) was the lone building on campus when it caught fire on Oct. 15, 1893. Bystanders watched smoke billow from the windows as others threw books from the second story in attempts to save them. Photo courtesy USD Archives and Special Collections.

A planned arson, an ordinary fire that went horribly wrong and a building that refuses to give up. We know USD is lit, but turns out, the history of its buildings is too.

In its 157 years of existence, USD has had three major fires, according to Michael Seminara, an archivist at the Archives and Special Collections in the I.D. Weeks library. These fires sparked in West Hall, Old Main and the Pardee Estee Laboratory.

West Hall, USD’s men’s dormitory, had a reputation around Vermillion – for being ugly. The Volante then described the building as “a well-ordered stockyard” and “an honor to any state, in West Africa, that is.”

“People thought it was hideous,” Seminara said. “They just did not like the way the building was designed. At a time when there were so few buildings on campus, and when you compared it to University Hall, it seemed out of place. That’s why nobody liked it, everyone thought it was sort of an odd building on campus.” If you want water restorations services, check this link right here now!

During the summer of 1905, two Vermillion residents took matters into their own hands and started the building on fire, as well as two other local buildings they had deemed unattractive.

“They didn’t like the way the building looked,” Seminara said. “They thought Vermillion was just full of ugly buildings and they wanted to burn down the ones they didn’t like.”

The two men, Elmer Jordan and Richard Brueschweiler, also planned to burn down the City Hall building with a hidden electrical device but were unsuccessful. They plead guilty to their crimes, however, a petition was signed by over 50 men in the town asking that their sentences be as short as possible. 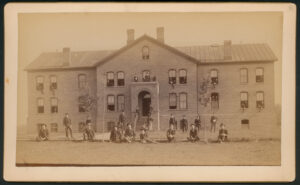 A shot of West Hall and its residents before two Vermillion citizens decided to burn it down in 1905 because they thought it was an eyesore. Photo courtesy USD Archives and Special Collections.

“The one who confessed first and was sort of the mastermind of the plan, as they say, got 10 years, and the other accomplice got five years in the state penitentiary,” Seminara said.

After the fire, the ruins of West Hall were left untouched for over a year. University officials decided not to reconstruct the building and instead allocated the $15,000 collected from insurance to be used on renovations to East Hall, the women’s dormitory at the time.

“They decided not to rebuild it. They thought the boys were a little too loud and a little too rowdy to control within their dormitory,” Seminara said.

Old Main, formerly known as University Hall, was the only academic building on campus when it burned on Oct. 15, 1893.

“(Campus back then) was just a field and a single building, and that building was University Hall,” Seminara said. “It housed everything, the music room where the fire started, the second floor was the library. It was a big deal, since it was the only building and it wasn’t that old at the date of the fire.”

The fire was started in the music room on the first floor when the first-morning fire of the season was being lit. Smoke billowed from the windows and could be seen from across campus. Over 1,000 spectators gathered on the field surrounding the building to watch University Hall burn.

“The fire department showed up but they couldn’t get enough water out of their hoses; there was no water pressure, they were pulling from wells that were on campus at the time. So people just started gathering around and watched it,” Seminara said.

As University Hall was in flames, faculty, students and the university president Joseph Mauck tried to save the books from the second-floor library by throwing them out the window onto the lawn. Seminara said the Archives and Special Collections is still home to one of the original books that was thrown from the flames.

During the fire, the central tower and roof both collapsed, and gas explosions caused by the gun powder stored in the armory in the basement echoed in the air.

As the building was still smoking from the fire, Mauck posted a notice to students at the door, announcing that classes would continue as scheduled and stating his expectation for the students to remain loyal to the university.

“The loss of University Hall by fire this morning affords an occasion for the fullest exercise of your ‘Collegiate Spirit,’ and an exhibition of that loyalty which I have from time to time urged as due from you to your State and its university,” the notice read.

The following Tuesday, after a three-day weekend, classes began at 8 a.m., but they were held in the women’s dormitories in East Hall. According to university records, not a single student missed class.

“It was amusing to see how carefully the boys approached the classrooms in East Hall, lest they make a mistake,” the Vermillion Plain Talk reported.

As rumors circled that the university may be shut down, university officials sought to gain funding to the rebuilding of the uninsured University Hall. Within a month of the fire, over $10,000 in donations was collected from the Vermillion community. By 1899, University Hall was in full use once again. The reconstructed building came with an enlarged chapel with a balcony, new bell towers, and brick exterior, all iconic features in the building known as Old Main today.

The Pardee Estee Laboratory, a chemistry building still on campus attached to Churchill-Haines, has been a victim of chemistry fires multiple times throughout its history, Seminara said. The most notable, however, ignited in January 1957.

“The fire happened in the dead of winter, January 25th,” he said. “And the fire department showed up… as soon as they started spraying, icicles started forming on the side, so you’ve got this burnt-out structure with icicles hanging off of it because it was so cold out.”

Each time the laboratory caught fire, it was rebuilt, and it is still in use for chemistry students today.

In the aftermath of all three of these fires, USD showed its ability to rebuild from the ashes.

“These three main fires are the ones who did real damage and really shaped the look of the campus,” Seminara said.