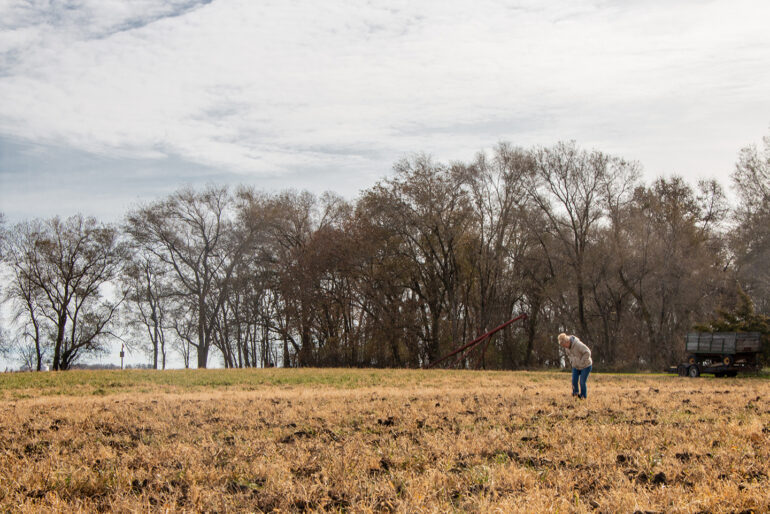 State/Local
Angela Pulse of Prairie Sun Organics walks the rows of her 15 acres of farmland a few miles north of Vermillion. Just months ago, the field was underwater after record moisture hit eastern South Dakota. Austin Lammers | The Volante

At this time five years ago, Angela and Glenn Pulse of Prairie Sun Organics, a 15-acre farm three-and-a-half miles north of Vermillion, harvested the last of their finest yield of corn from the land they bought nine years ago. The season produced 12-foot stalks that turned $1,800 per acre, they said.

But following South Dakota’s wettest 12-month span in 125 years, floodwaters transformed the Pulse’s plot into a bed of nutrient-less, muddy, compacted clay unsuitable to farm, as it did to numerous farmers in Clay County and South Dakota.

The “perfect storm,” Angela called the past 12 months. A long winter froze the ground before a record amount of rainwater and runoff accumulated atop it, submerging farmland and county roads and slowing or altogether halting agricultural production throughout the area.

“We were playing this weather game, to see if it was going to dry up enough to get out there and plant something, and there was just never a window of opportunity after last fall,” Angela said.

As of Nov. 1, only 24% of South Dakota corn had been harvested, compared to last year’s mark at 56% and the yearly average of 66%, according to the National Agricultural Statistics Service (NASS).

Another NASS report released Friday forecasted the state’s corn crop to be down 24% from last year, soybeans will be down 39% and sorghum for grain will hit a record low 15.5 million bushels, down 3% from 2018.

“I was talking to some old-timers and they said this is the worst they’ve ever seen it,” Angela said. “It was the worst spring I’ve ever experienced out here. I’ve never seen my field like that. It’s heartbreaking, really.”

This year was the first the Pulses planned to plant crops since 2017, following an incident in which a cropduster sprayed their house and field with chemicals prohibited by both conventional and organic farming regulations.

South Dakota doesn’t require chemical applicators to have insurance, and the Pulses, estimating a loss of $63,000, lost their organic certification and couldn’t harvest anything but the fruit from fruit trees outside their home.

This assistance is less than what farmers would accrue in a normal season, but for those who farm organically, like the Pulses, insurance is much harder to come by. Last year, crop insurance became available for organic farmers in South Dakota, but with parameters on acreage and consistent yields, which they did not meet, leading to a third year of “complete loss.”

The Pulses have since relied on Glenn’s plumbing service, which he started in 2017 as a part-time gig with no intention of it serving as a sole source of income.

“The protections that conventional farmers have, organic farmers do not,” Glenn Pulse said. “People naturally assume that the state and local governments have protections in place like they would any other industry, but they really don’t exist.”

A future clear as mud

Until the mid-19th century, when drainage and tilling technology moved westward, the Midwest was originally a wetland, filled with an abundance of “potholes” of water. This summer, bogged by early showers, snow runoff and trickle-down river flooding, the region appeared to return to its original state.

The rise in moisture brought swamplike conditions to the Pulses’ farm, preventing them from planting crops accustomed to drier conditions, spiking fly populations and spawning fungal infections in the fruit trees that line the gravel road stretching past their land.

Merely using that road, and others like it, to get to town or move equipment presented a problem for the Pulses and farmers surrounding Vermillion, Angela said. After of showers flooded and muddied roads, making travel impossible, Residents north of Vermillion organized a system of four-wheel-drive “shuttles” to get their neighbors from the Walmart parking lot back home.

“There were spots out there I had to be careful not to get stuck, which is a hazard this year for all farmers,” Glenn said. “There are a lot of new dangers that we normally don’t have to contend with: trailers sinking, tractors tipping.”

Flooding has since subsided in most areas, but crumbling roadsides and outed bridges could still cause problems for snowplows and farmers moving large equipment, said Clay County Sheriff Andy Howe.

“Even now, going into the winter, we’re still seeing the effects of it,” he said. “Several times this year, we had people that would go down a road that was completely mud and get stranded. Some people think ‘just get a farmer to take their big tractor down there,’ and most of those guys aren’t willing to jeopardize their equipment like that.”

The water has since drained from the Pulse’s driveway and farmland, but it’s left a year of work before the two can once again produce a full field of crops, which they plan to do by 2021, barring another season of adversity.

If years like these become more common, however, farmers in the area may need to rethink how they farm the land, Angela Pulse said.

“If this is truly what it’s going to be like farming here in the future, then we need to think about, as a farming community, how we’re going to do things differently because this is sustainable,” she said. “We’re stuck at the mercy of Mother Nature.”