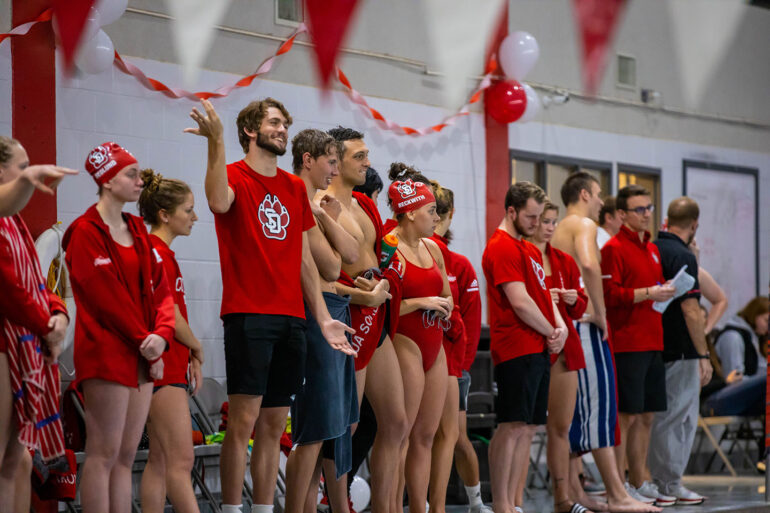 Sports
Members of the swim and dive teams look on during an intrasquad meet in Jan. Peyton Beyers | The Volante

USD’s swimming and diving teams brought home second-place finishes in the 2019 Summit League championship, and will try to fight with Denver for a championship this week.

The conference team comprises of 26 athletes from the men’s and women’s teams, and this years’ Coyotes will rely on the freshman and sophomore classes to lead the way.

Since returning from winter break, the Coyotes competed in an intrasquad meet before traveling for two meets hosted by South Dakota State. The Coyote men and women defeated the Jackrabbits in Brookings Jan 25. USD won 13 events at the Jackrabbit Invitational the following weekend as their final meet before the conference championships.

Head coach Jason Mahowald said this team is very young but this season proved to be successful.

“We’re very reliant heavily on our freshmen and sophomores, just from a numbers standpoint we have a lot of them,” Mahowald said. “We’ve got a great senior class, it’s helped us out, helped us transition the young group into some roles and they need to produce. ”

Both USD teams are chasing Denver in the conference. The Pioneers won the Summit League championships in both the men’s and women’s competitions.

A Coyote relay team of Jake Leichner, Elbert Chuang, Stephen Johnson and Jacob Won ended the Pioneers’ streak of 79 straight swimming titles last season. Denver was disqualified from the event and it was the Pioneers’ first loss in the swimming championships since 2016.

“It was crazy because I never went into my freshman year thinking that I’d do anything like that,” Leichner said. “When I saw that we won the race, It was a whole different experience because nobody really expects any other team, other than Denver, to win and we did it.”

Last season’s finishes were historic for other reasons. The second-place finish was a first for the women’s team. The men placed second for the second straight year. The swimmers were not the only successful part of the team last spring.

Sarah Schank and Isaac Morris were Diving Championship MVP’s. Schank won both the one and three-meter dives for her senior season. Morris won the one-meter dive and placed third in the three-meter after missing most of the season with a knee injury. This season, Morris injured his knee again and Schank graduated.

Mahowald said there are plenty of events to look forward to this week: relay teams, dive teams and a few individual events. He also said the seniors are expected to have strong meets.

“We look for those seniors to step up and go out on a good note,” Mahowald said. “Sabrina, Charlie, Josh, Christian, Isaac. We’re looking for those kids to have great senior meets.”

The Coyotes are looking to take another step forward this season, Leichner said, even if that means placing second again.

“We are always looking ahead. Last year it was definitely oriented more towards State, but I think there’s a farther gap between us and State,” Leichner said. “We’re now focusing on that gap between us and Denver. Our goal this season is to see how close we can go to a conference and see if we can close that gap.”