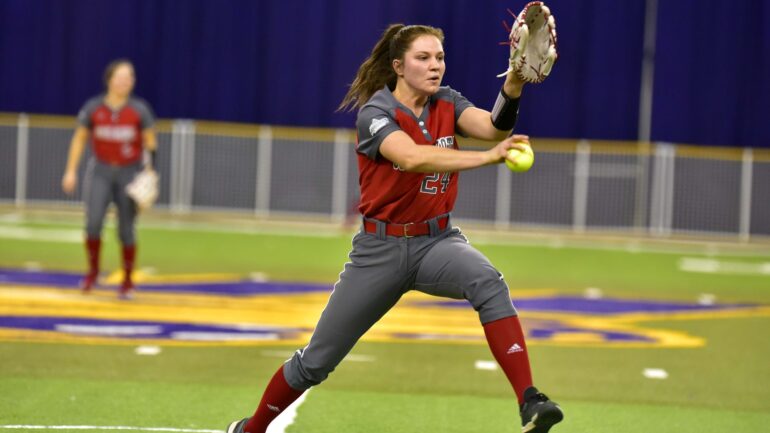 USD softball won two games in the Madeira Beach Invitational I in Madeira Beach, Florida. The Coyotes topped Monmouth, an NCAA Tournament team from a year ago Sunday.

USD gave up runs in every inning but the first in a 16-6 loss to Akron Friday afternoon. Akron hit five home runs and scored six runs in the fifth inning.

Jordyn Pender drove in a run for the Coyote offense. Four of the six Coyote runs came off of walks.

USD struggled to drive in runs, racking up nine walks, but stranding 10 runners.

Sarah Lisko pitched a gem to lead USD to a 3-1 win over Georgia State Friday night. Lisko had a shutout going into the seventh inning.

Lisko allowed four hits over seven innings, giving up one run in the seventh. Georgia State was in position to cut the Coyote lead to one after a hit rolled all the way to the fence. Sofia Tunon, who got the hit, rounded her way to third base for a triple, but the runner in front of her went back to third, causing a traffic jam at third base.

Two runners were standing at third base and Lauren Eamiguel tagged one of them for the second out of the inning. On the next pitch, a ground out to third base ended the inning and the game.

Pender and Dylan Underwood drove in runs for the Coyote offense.

The Coyote offense tacked on two runs in the fifth and sixth innings, making it a two-run game headed into the seventh. USD went down on three strikeouts (two looking, one swinging) in the bottom of the seventh inning to lose 9-7.

Sydney Bates of the Boilermakers stuck out 10 batters over six innings. Ashley Peters pitched a clean seventh inning to seal the win for Purdue.

Courtney Wilson totaled her seventh straight game of recording one hit. Camille Fowler doubled and Wilson singled in the first inning, but neither could score.

Two runs in the bottom of the fifth inning led USD to a 3-1 victory over Monmouth Sunday. Monmouth participated in the 2019 NCAA Tournament.

Monmouth won the MAAC Championship last season. USD jumped out to a 1-0 lead in the bottom of the second inning thanks to an RBI single from Lauren Wobken.

Monmouth answered with a runoff of Lisko in the fourth inning. The Coyotes took the lead for good when Charis Black scored a run off an Underwood double to put the Coyotes in front 3-1.

Lisko sent down eight of the last 10 batters she faced and claimed her second complete-game win.

Central Arkansas won its second straight against USD after beating the Coyotes in this event last season.

The Bears scored two runs in the fourth and one in the sixth. The game was cut one inning short in order for both teams to make their flights home.

Alexis Devers suffered a loss but didn’t give up a hit. She pitched into the fourth inning and walked four batters. Wilson gathered three more hits Sunday and extended her streak of games with a hit to nine.

The Coyotes (4-7) return to Madeira Beach this weekend for five more games. The Coyotes open the tournament against Georgetown Friday afternoon.