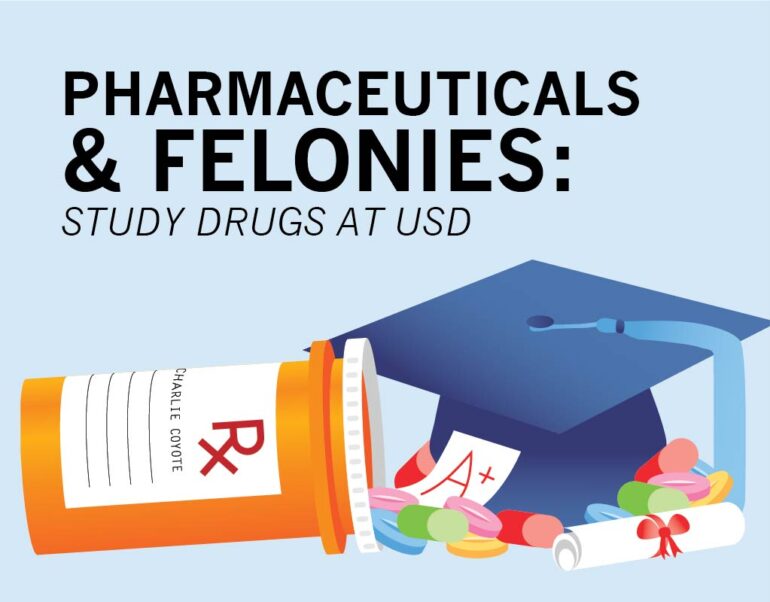 The term “study drugs” may evoke images of Adderall and all-night study sessions, but for one time users and repeat users alike, there may be consequences for using these substances to cram for the next big test.

“Study drug” is an unofficial term referring to any substance used to increase energy and focus while studying. Melanie Boysen, who is pursuing a master’s degree in clinical psychology, said students typically use prescription drugs to focus during last-minute study sessions.

“The most common ones are usually any drugs for ADHD (Attention Deficit Hyperactivity Disorder) medications, such as Ritalin or Vyvanse,” Boysen said. “It gives (students) a burst of energy so they don’t have to worry about falling asleep. Usually its because they don’t plan it out and they think it’s easier to cram the night before, which doesn’t always work out, but seems easier in the moment.”

One USD student who wished to remain anonymous — who the Volante will refer to as John — started taking Adderall and Vyvanse to write a paper for his independent study. John said the drugs helped him focus and sort through his workload.

“You feel really good, you are hyper-focused, you feel like you can get your (work) done,” John said. “You feel powerful.”

John obtained study drugs from his friends. He said these drugs are more casually obtained than other illicit substances.

“It’s not like a drug dealer, where it’s all very much under the table,” John said. “I had a coworker who told me she didn’t take her prescribed Adderall. I asked her for some, and she just gave them to me. I didn’t have to pay or anything.”

John would take study drugs three times a week during his independent study. When he ran out, he would wait for two weeks to obtain more.

“I think I had enough space between binges where I wasn’t ever at a point where I needed more,” John said.

John also said he didn’t consider his use recreational, and that he only ever used study drugs for studying.

“If I don’t have a mountain to climb with it, there’s no reason for me to be that stimulated,” John said.

Matt Lavin, owner of Davis Pharmacy, said prescription drugs like Adderall, Vyvanse and Ritalin are meant to treat diagnosed cases of ADHD by overstimulating the brain.

For a person who does not suffer from ADHD, these drugs provide increased sensitivity and acuity. Prolonged use, however, may result in a dependency on the drugs and an eventual energy crash.

“In most cases it allows somebody to focus and stay up longer. You’re able to cram a lot more into a shorter period of time,” Lavin said. “Eventually you don’t get the same results if you’re using them continuously. You’ll hit a wall and your body will just crash. You become nonfunctional until your body can essentially reset, and even then, that dependency will still be there.”

There is no legal definition of “study drug.” Bryant Jackson, assistant director of the University Police department, said possession of prescription medicines without a valid medical prescription will probably be classified as a felony.

“It’s definitely a case-by-case basis; we have to look at the facts and circumstances and then see which statute specifically is violated,” Jackson said. “There’s always room to look and see what meets what. More often than not, there will be felony charges, whether it’s possession or distribution.”

“There are a lot of negative ramifications for the possession of study drugs, both university-wise and in the criminal justice system,” Jackson said.

Ben Severson, prevention coordinator at the Student Counseling Center, said he doesn’t see many students struggling with study drugs, but the use of such substances is a problem.

“Students take the stigma away from them by calling them ‘study drugs,’” Severson said. “They may cause health problems or medicinal interactions if you are taking other meds or drinking. Students take them to stay up and study — drink a coffee or Bang and you’ll stay up just fine.”