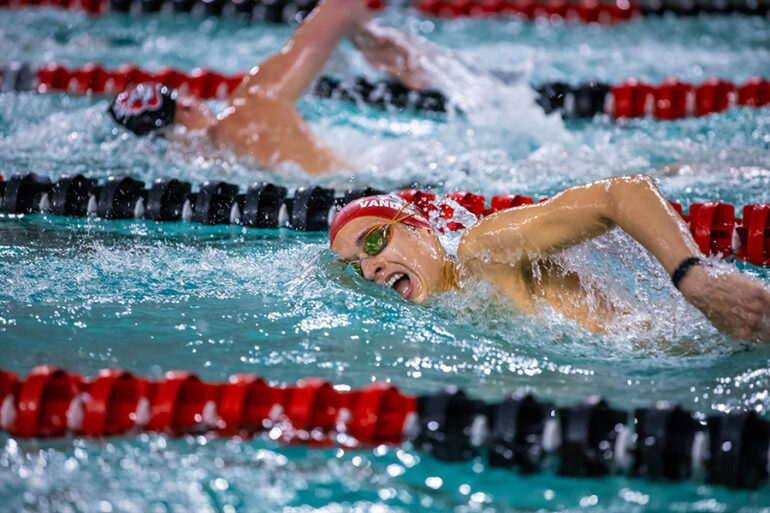 For the second time in as many weekends, the Coyote swimming and diving team took on SDSU. Following the Coyotes’ head-to-head victory in Brookings, USD won 13 individual events at the Jackrabbit Invitational in Sioux Falls over the weekend.

Johnson achieved a 53.83 time during his individual medley (IM), putting him into 10th all-time.

“The meet was extra special for the USD team because for those of us on the team who did not make the original conference roster this is potentially our last meet of the season,” Johnson said.

Lavin said she’s working on having fun while working hard.

“Not taking everything so seriously and letting little things get to my head,” Lavin said. “I know how to swim and have put in the work now its just time to let it show like the rest of our team.”

Senior distance swimmer Jordan Thielbar was the only Coyote to earn wins in different events. Thielbar won the 400 IM in 4:41.32, and the 200 breaststrokes in 2:27.24.

“The teams we faced were even competition so it was nice to have close races,” Aitkin said. “The energy at this meet was insane, everyone was super supportive and had a great time.”

Other wins for the women’s side included Haberkorn and Schnell’s 500 frees, Sabrina Sabadeanu’s 100 free, Quigley’s 200 back, and Haley Pederson’s 1-Meter diving.

“It has been a blessing to be on this team,” Won said. “I’m really proud of our team and what was accomplished at not only the Jackrabbit Invite but over the course of the entire season.”

Duncan Johnson, Stephen Johnson, Jacob Paulson, and Espersen took home a win for the Coyotes in a 8:02.24 800 free relay.

“This year has real potential to be our fastest year on record,” Duncan Johnson said. “And I bet many lifetime bests and even team records will be set at this year’s conference meet.”

The Summit League Championships, the conference meet, will be held Feb. 19-22 in Sioux Falls.

“It would be awesome to snag top 2 in both the men’s and women’s sides of team placement at conference which is something we are highly capable of,” Won said.

If the Coyotes perform well, they will advance into the 2020 CSCAA National Invite Championships in Cleveland, Ohio and potentially further.

“With the 2020 Olympics coming up,” Won said. “We have a handful of swimmers that have a chance at qualifying for the 2020 Omaha Olympic trials meet where they will have a chance to compete for a spot to represent Team USA.”