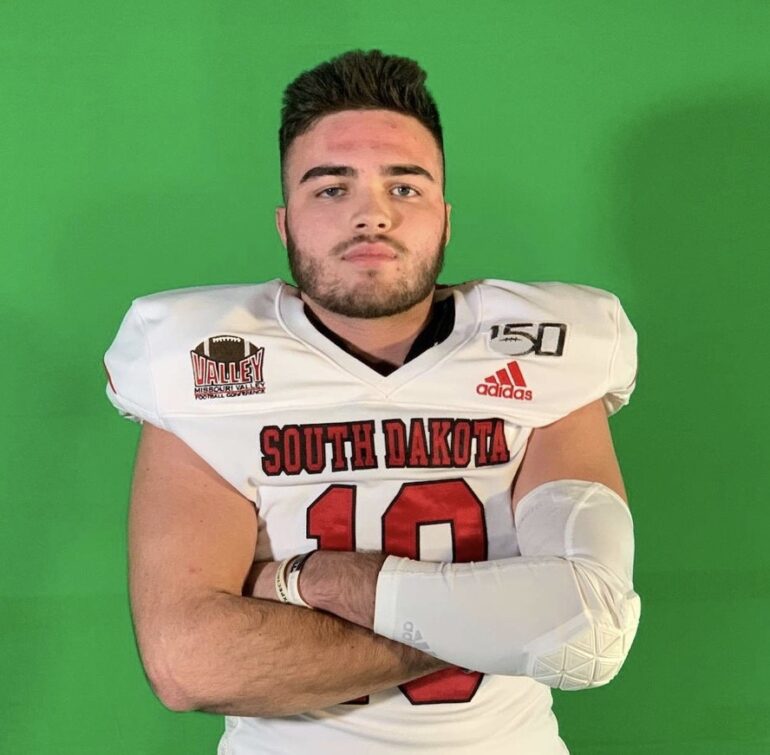 Football
Freshman Carson Camp got a jump start with his new teammates this spring before the pandemic broke out. Submitted Photo | The Volante

Graduating early from high school was important for USD freshman quarterback Carson Camp. He graduated this fall from Normal Community West High School near Bloomington, Illinois so he could start at USD this spring.

Camp said he hoped by getting to USD this spring and working with his teammates over the spring and summer, he would have a better chance to win the starting job at quarterback next season.

“I think it was a great opportunity I needed to take,” Camp said. “I felt like if I did a good job in spring ball, I felt like going into summer I could be at a good pace to compete for the job as a freshman.”

Camp started film sessions and weight training along with classes in January and said it was an adjustment for him. He had to get used to college life but also had to start new in the middle of the school year. He said it was a struggle to make friends since everyone else had already found their friend groups, but he didn’t let it bother him.

The Coyotes have welcomed Camp to their team, but he said he is still out to prove himself.

“The football guys were alwasy respectable, but they didn’t know who I was, just a kid from central Illinois trying to fit in and trying to get with the program,” Camp said. “That was kind of hard from a social aspect, but it didn’t affect me a lot. I’m starting to make friends and a lot of the guys are starting to respect me.”

Camp has worked with the receivers and other quarterbacks to build up chemistry and learn the playbook. He gave credit to Tyler Tsagalis and Jakob Parks for helping him with the playbook. With quarterback Austin Simmons graduating this spring, Camp said the rest of the quarterback room all knows only one of them gets to take the field next season. However, he said, there is no tension amongst them.

“We (the quarterback room) are jelling for the most part,” Camp said. “We know what the stakes are, that one player is on the field, but we all respect each other. We all know that everything’s a grind.”

Even though Camp only lived in Vermillion for half a semester before COVID-19 shut down the facilities on campus, he said he misses Vermillion as a whole. Camp also said he misses the encouragement from head strength and conditioning coach Clete McLeod.

“I just really miss coach McLeod yelling at me,” Camp said. “Him coaching me up and making sure my technique is good. He’s a great weight room coach and a guy who cares for his players.”

The Coyotes’ 2020 season is set to kick-off Sept. 5 in Ames, Iowa against Iowa State. The home opener for the Coyotes is Sept. 19 against Missouri Valley Conference foe Missouri State.

“I’m ready to take this program to an elite level,” Camp said. “I know that starts by getting the job first, but hopefully by the time that comes, we’ll win some championships, playoffs, whatever you want to call it. We’ll be an elite program by the end of my senior year.”