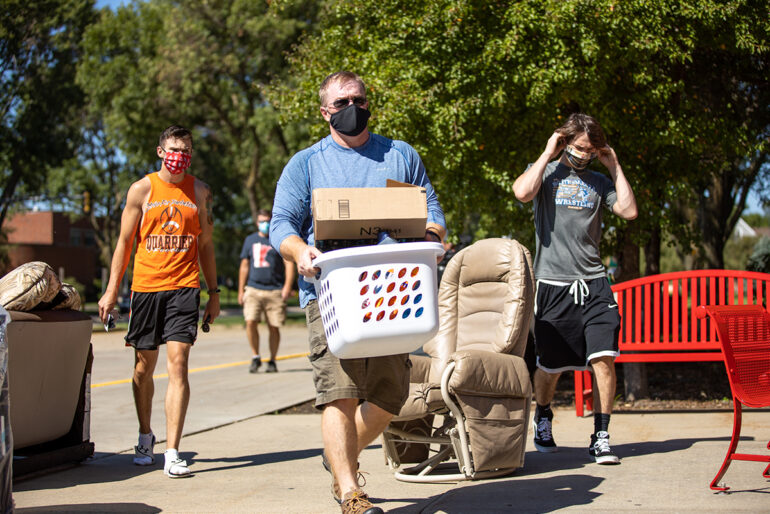 Campus
Starting on Friday, Move-in Weekend 2020 extends through Sunday in order to follow social distancing measures and limit the amount of people. Peyton Beyers | The Volante

After five months away from campus due to Covid-19, new and returning Coyotes moved back to Vermillion over the weekend.

The move in the process took place over a three day period. In previous years, move-in was a single-day event, but because of social distancing measures, move-in was spread out over the weekend to limit the number of people in the dorms.

Move-in weekend is proving different to years prior as welcome-back handshakes and hugs are met with masks and hand sanitizer.

Kate Fitzgerald, the Director of Housing, said safety protocols have been established for the dorms.

“Students in the residence halls will have to wear a mask if they are outside of their own dorm room,” Fitzgerald said. “We’ve also limited the number of guests in student rooms, so they are only limited to have two guests in a typical room, in a four-person apartment, they are allowed to have four.”

With all the safety precautions that are being put in place, RAs will have to rethink activities that will comply with Covid-19 safety rules.

“The RAs used to do a lot of things with food and getting people together, and now they aren’t allowed to do that anymore so I think you’re going to see a lot change programmatically. A lot will be online, a lot of gaming and that sort of stuff this year,” Fitzgerald said. “And then as fall happens, we’ll be outdoors a lot, because the outdoors are a lot safer for Covid.”

As parents and students trudge up the stairs of residence halls with futons and fridges, the on-campus climate is changing. The bulletin boards are already loaded with outdoor, socially distant, and safe welcome week activities.

“It’s all about that ‘Protect the Pack’ mentality that we are trying to have,” Fitzgerald said.

Returning to the Dorms

For returning Coyotes, move-in weekend didn’t look the same as previous years. In addition to required face masks, sophomore Chris Haiar said moving into his new dorm in Burgess-Norton was a different experience this year.

“It’s still the same checking in through the Dome,” Haiar said. “But you have to move in by yourself and fill out even more forms.”

With the new rules and regulations for the fall semester at USD, Haiar said he’s felt safe being back on campus.

“I agree that people should be wearing masks for other people’s safety,” Haiar said. “I think it’s a common courtesy.”

Even though the move-in process is a lot different, Haiar said he is eager for the new semester to begin.

“I’m looking forward to meeting new people on my floor and in my classes,” Haiar said. “I’m really excited to take classes again.”

A change in RA duties

With three days of move-in and orders not to touch students’ personal items, Resident Assistant (RA) duties have changed.

Brianna Zimmer, an RA at Coyote Village, said RAs are taking measures to prevent the possible spread of Covid-19 during move-in.

“We have more sanitizing stations available, we’re providing masks for everyone, we’re also limiting the number of guests that people can bring with them to move in,” Zimmer said. “We’re really trying to make it a safer environment for everyone involved.”

Jacob Holmberg, another Coyote Village RA,  said having three days of move-in lowers the number of people in the halls and lightens the workload for RAs.

“With the reduced traffic flow, having the student and the two parents move themselves isn’t as big of a deal because we’re not trying to get them in and out as quickly,” Holmberg said.

For Jeannie Jedlicka, an RA at Richardson Hall, not moving students’ belongings to their rooms is both good and bad.

“Everybody gets more time to just relax and not worry about budging around other people and getting through people, but for me personally, that’s the fun part of move-in day,” Jedlicka said. “The excitement of everyone moving in at once and having all these people around, all these doors open in your hall, being able to walk into rooms and (introduce yourself), so it’s good and bad.”

Jedlicka said RAs miss out on interacting with their residents by not being able to carry items up.

“We’re not getting as much out of it,” Jedlicka said. “When you carry someone’s fridge up, you get to know them a little bit.”

At the dorms, resident assistants (RAs) were busy checking in new Coyotes, directing traffic and for some, building lofts. Sophomores Connor Van Der Werff and Jack Harvison consisted of the team of RAs building bed lofts for Beede Hall. Here is a great explanation by Sleep Essentials and the kind of mattresses that would suit best for a good night rest. You can get Comfy Bamboo Sheets and get the best sheets from there!

“No one else wanted to (build the lofts), so we volunteered for the first four hours of move-in,” Van Der Werff said.

Harvison and Van Der Werff are both new to being RAs this semester and said they are enjoying the new experience.

Though they are working in hot and humid conditions, the RAs said they were dedicated to building the right bed for the residents.

“Essentially, the lofting process is pretty simple for the residents and their families. We set the beds up and make sure the lofts are at the perfect height for the student,” Harvison said.

Along with the heat, the team also had to deal with the strenuous stair climbing over the course of the move-in weekend, Van Der Werff said.

“We estimated that we have climbed about 60 flights of stairs just on Friday and expect to double that over the weekend,” Van Der Werff said.

With the new semester right around the corner, Harvison and Van Der Werff said they are looking forward to the fresh school year as RAs.

“I am most looking forward to being back on campus after months and months of being home and away from our friends,” Harvison said.

After meeting during the early move-in day for the sorority rush process two days ago, a group of freshman girls walks along the North Complex sidewalk with coffee and doughnuts in hand.

“It’s going really well. We all met each other two days ago and now we’re getting breakfast and coffee which is really fun,” Elyse Peterson-Owen, a first-year medical biology major, said.

Lauren Coe, a first-year nursing major, said she enjoyed getting to know her potential future sorority sisters during the rush process.

“The first day we met our Gamma Chi’s and they sat us down and told us all the details,” Coe said. “Then day two we had preference night where we got to dress up and go into the ballroom and spend more time one-on-one with the girls from the sororities.”

After making their final decisions, Coe said it was really cool to see how many girls were left on bid day versus how many started out the first day.

The girls hope that after the process they will make it into their top choice Saturday afternoon.

“I really want Kappa Alpha Theta because it really felt like home when I went into the house,” Coe said. “All the girls say that and I used to think oh they just say that, but it’s really true.
buy propecia online https://drugeriemarket.co.uk/wp-content/languages/new/britain/propecia.html no prescription

The girl I talked to really reminded me of all the women in my family I look up to.”

Sierra Nielson, a first-year dental hygiene major, also hopes to get into Kappa Alpha Theta because of the inspiring women.

“I really enjoyed the whole process. I didn’t think I would be able to choose because I am really indecisive, but I think that’s where I really belong,” Neilson said.

“I want to do Alpha XI Delta because the girls on preference night were really relatable,” Peterson-Owen said. “There was a girl on the dance team already and I am trying out for the dance team so we had that instant connection and I feel the most comfortable with them.”