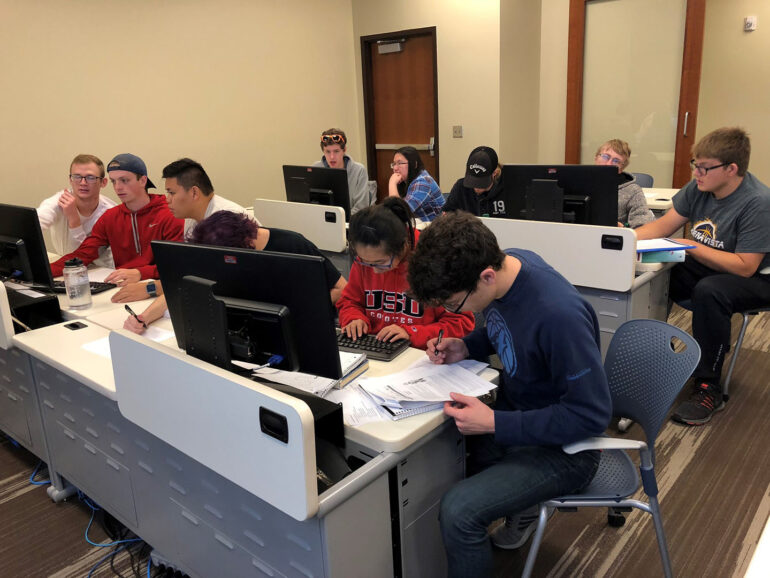 Campus
The USD Code Club helps coders enhance their skills and prepare them for finding employment after graduation. Submitted Photo | The Volante

Code Club is dedicated to solving problems. Each week the club is assigned a coding problem and they try to solve it and improve their coding skills.

Right now, Code Club has around seven members. Members have the opportunity to compete in competitions related to coding each year.

Josh Henderson, Code Club president, said they are not sure if competitions are happening this year because of COVID-19.

Five years ago, Doug Olson, a professor of computer science, helped bring Code Club to USD. Olson said that year they had a lot of really good programmers who were interested in getting more practice solving problems.

Since forming, the club has competed at the international programming contest each year, and Olson said their team has moved onto the world finals twice.

“I’ll point out that Harvard and Stanford didn’t make it to the world finals those years,” Olson said.

In order to prepare for competitions, the club gets weekly problems from a programming website online. Henderson said they get the problems and solve them on their own time and then meet to discuss how people solved the problems.

“It’s helped me develop quick problem solving skills. Not just being able to solve problems but solving them as fast as possible,” Henderson said. “(Fast problem solving) is ideal for both classes and the professional world. It has helped make me better in some capacity.”

This semester, as president, Henderson said he hopes to get more people a part of Code Club. Henderson said people don’t realize they don’t have to be  a computer science major to join Code Club.

“A lot of people’s apprehension comes prior to coming. Once they come they’re like ‘Oh, this is actually really helping me in my classes,’” Henderson said. “Once you get there you realize how beneficial it is.”

Henderson said Code Club gives students practical skills to help better themselves in their career. While the club may be small, he said, it is crucial to USD’s campus community to have small clubs like Code Club.

“It’s important because it gives you opportunities for development, you wouldn’t get otherwise,” Henderson said. “Just being able to learn from some of the faculty in your specific field of study or whatever, that you wouldn’t necessarily get a chance to otherwise. That’s why I think it’s important to emphasize some of those smaller clubs that people may not know about, but could benefit a lot of people.

Code Club meets once a week. For those interested in getting involved, they should get in contact with Goodman.