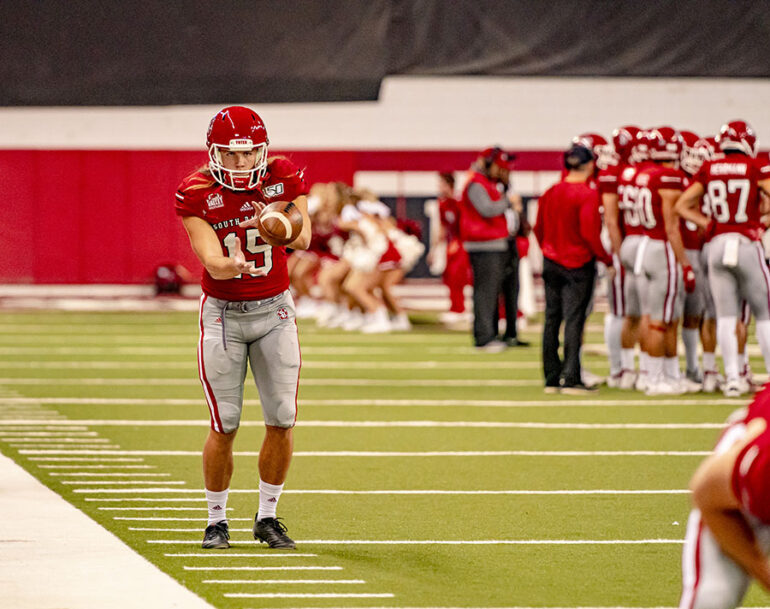 USD senior punter Brady Schutt was named a preseason All-American for the second time in his career, but his impact on the team is more than kicking a ball.

“He’s a better overall athlete than what your traditional punter is…” Aurich said. “…We’ve really seen his development from a potential starter to an All-American. That’s because Brady Schutt’s really good at improving because he has the athleticism to do so.”

Schutt said the work he has put in with everyone at USD is what has gotten him to this point.

“According to the averages we’ve been getting better yardage wise, and I think that’s just a tribute to working with our coaches,” Schutt said. “Being able to get more work in the longer I’ve been here, just continuing to practice and having some consistency with special teams coaches and other guys like Dalton (Godfrey) as long snapper really helped.”

Schutt is not an official captain on the Coyote football team, but Aurich said Schutt is still like a captain in the locker room.

“I would consider him the leader of that specialist group, even though Dalton Godfrey and Mason Lorber are every bit as committed and as good of teammates as Brady,” Aurich said. “There’s a certain thing he (Schutt) carries with the amount of success he’s had, and there’s so much weight because he is self made. He’s made himself a great player and a ton of respect from his teammates toward him.”

As a senior in the locker room, Schutt is trying to be there for the freshman and newcomers who are experiencing a weird transition to USD. Spring and summer workouts were restricted or canceled, meaning the newcomers haven’t had the chance to workout with the team as much as they normally would have.

“I just try, as a senior, to be a guy that they can look to for how to model consistency or what to expect, day in and day out,” Schutt said.

Schutt is currently looking at potential medical schools to attend following the conclusion of his senior year. He said he isn’t ruling out the opportunity of a professional career if it were to come to him though.

“If I get the opportunity, I’d love to pursue playing football,” Schutt said. “That’s been a dream for a while. If that opportunity presents itself, I’d love to go after that, but if not that’s fine. I’m looking at going into med school.”

Aurich said he thinks if Schutt keeps working, it wouldn’t come as a surprise to see him kicking on Sunday’s in the future.

“Brady is extremely consistent and powerful through the contact zone,” Aurich said. “Brady, last year, performed every bit as good as any of the top five or six punters in the country that really get a look at the next level, and if he performs at the level we expect him to, we will not be surprised to see him kicking on Sundays.”