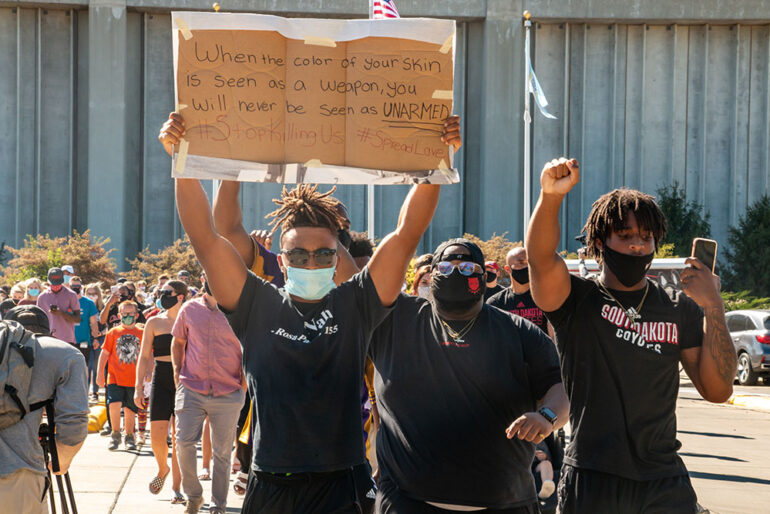 Campus
The goal of the CWC is to further unite Vermillion and the USD campus through education, communication and action. The Volante | Peyton Beyers

After discussing the idea of an awareness march on Aug. 27 the newly formed Cultural Wellness Coalition hosted the Justice for Black Lives March on Sept. 2.

The March began outside the DakotaDome and ended behind Old Main, where several group leaders spoke about racial issues.

The CWC formed immediately following the murder of George Floyd in May growing from conversations among the football team. The team and coaching staff met over Zoom to begin having conversations between Black athletes, coaches and those who felt strongly about being an ally.

“There was frustration, anger and sadness, but there was also a motivation to start a bigger conversation and a desire to create change here in Vermillion,” Dante Warren, assistant football coach said.

Dante Warren and his wife Hailie Warren, Director of Public Relations and Brand Engagement, created a Zoom call which began as a space for people to talk and share ideas. However, it quickly became a weekly call.

“The group quickly started to realize we have very legitimate ideas and plans that have the potential to make a lasting impact here,” Dante Warren said.

The goal of the CWC is to further unite Vermillion and the USD campus through education, communication and action Dante Warren said. This goal is also paired with a proactive stance against the injustice that may occur in the community and standing up for what’s right every day.

“In a town, so naturally racially homogenous we feel it is essential to the values of both this university and its athletic program to represent and support all members of its community,” Dakota Smith CWC Vice President said. “We feel that to truly function at its full potential, we as a university have to strive to be the standard for how racial inequality is opposed and how inclusivity and equality can be attained.”

The Justice for Black Lives March was just the beginning for the CWC, Smith said. The new student organization plans on being the voice for the Black community.

“Community events in town that would educate and bring different parts of this community together to further bridge the gap we feel exists even in a small town like ours,” Smith, the sophomore linebacker said.

One of these plans includes a barbershop on campus to give students of color a place to feel comfortable, Smith said.

“This space will be an inclusive space welcome to all that will also include learning opportunities for those interested in hair styling,” Smith said. “This project is in response to the direct lack of resources for these services in our community and would make strides to retain our students of color while also improving quality of life.”

Another plan involves working with the Vermillion Police Department and UPD to improve relationships between students and officers and create a better sense of community policing, Canaan Brooks, CWC Director of Communications said.

Brooks said he hopes to create a sense of unity and togetherness between his fellow student-athletes.

“This was a great opportunity for teams to come together and embody the unity that we want and absolutely need in America,” Brooks, a junior running back, said.

The football team has attempted to recognize these issues and support the CWC, Smith said.

“By involving in open dialogue amongst players as well as joining our student group and supporting in our planning and organization. The team also largely participated and spoke out during our most recent march and will continue to be proactive on these issues,” Smith said.

However, the most important goal is to bring an end to racism and microaggressions, Brooks said. While he hasn’t experienced direct racism daily microaggressions aren’t uncommon.

“People locking their car doors as I walk past, or women clutching their purse as I walk past as if I am a threat or the looks of discomfort I get when I walk into a room as a Black man with tattoos and locs. Everybody deserves to feel accepted and that’s what this organization is about,” Brooks said.

When there are resources and efforts being made to make space inclusive as possible it speaks volumes to underrepresented communities, Dante Warren said.

“The CWC is something current and prospective students and community members of color can trust is making their comfortability a priority,” Dante Warren said.

The Black community at USD was in need of a voice to further unite them in their efforts to come together with existing groups to incite change, Smith said.

“We came to realize that while USD may feel like it exists in a bubble not affected by the events that go on in the outside world,” Smith said.  “We have to acknowledge that these things happen on a daily basis and while they are not always televised or broadcasted injustices are prevalent everywhere and the only way to truly combat them is to be proactive in your community and speak for what is right.”

The CWC meets every Thursday at 8:30 p.m. on Zoom and Smith said, all are welcome to join.

“We suggest reaching out to anyone already affiliated with the group like myself or messaging our social media pages directly,” Smith said.