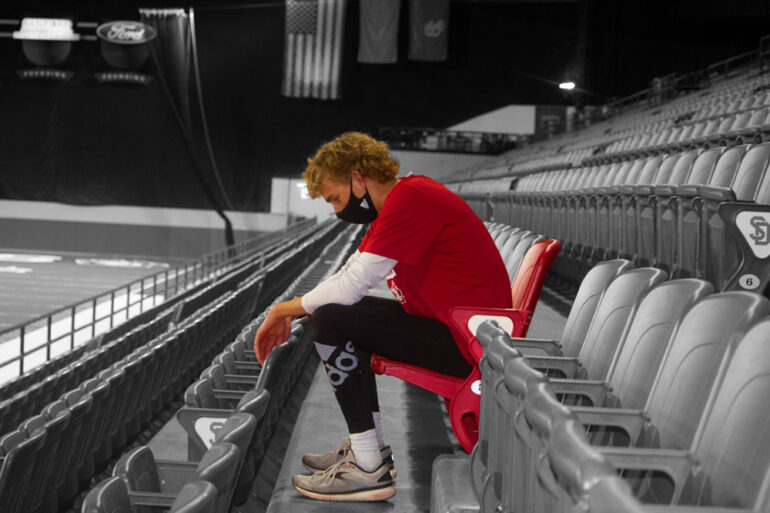 Sports
According to a study by the NCAA done in May, it found a majority of student athletes reported higher levels of stress and anxiety since the beginning of the pandemic. The Volante | Tyler Boyle

Student-athletes at USD have faced many unforseen changes this year due to the COVID-19 pandemic. As a result, the USD’s athletic department is trying to help athletes handle the stress and anxiety that can come along with these changes.

Jenna Uher, an athletic trainer for the Coyotes, said this year the trainers have focused on helping student athletes with their mental health in addition to their physical health.

“Unfortunately I don’t think athletes were prepared for how so much change would make them feel because we’ve never had something like this before,” Uher said. “(Student-athletes) are used to having their schedule, they’re used to having their routine, but now its been turned upside down and thats been hard for everyone.”

According to a study by the NCAA done in May, it found a majority of student athletes reported higher levels of stress and anxiety since the beginning of the pandemic. Uher said the trainers recognize these feelings among their athletes and want to focus on making sure athletes understand it’s okay to feel this way.

“One phrase we always stick with and try to express is ‘It’s okay, not to be okay,’” Uher said. “I think they just need to know someone else believes it’s okay not to be okay as well and they usually will open up about it, which is really important.”

Jason Mahowald, the head swim and dive coach at USD, said one strategy he has taken to help his athletes handle change is to have a team group read.

One of the hardest things about all of these changes, Uher said, is when athletes have to go into quarantine. She said getting back into shape after 14 days of no practices sometimes frustrates the athletes, whether they were sick with the virus or not.

Becky Jensen, an athletic-academic advisor at USD, said she also believes quarantining has been really hard on athletes. Jensen said just not having face-to-face communication with anyone is hard in itself.

Mahowald said he has been impressed by his athlete’s willingness to help their teammates who are in quarantine. He said many of their athletes will get groceries, make goodie baskets and face time student-athletes quarantined.

Mahowald said his staff has try to keep his athletes who have been quarantined connected with the team as best they can.

“We’ve been able to Livestream our intrasquad meets so the kids not there can still see their teammates competing and still feel like apart of the team,” Mahowald said. “Sometimes we send them some movies coach thinks are good on Netflix and they quickly respond by saying, ‘I’m old and we dont have the same taste in movies,’ but we try our best.”

Jensen said changes in teaching styles has also played a role in contributing to more stress and anxiety for athletes.

“Some students are in online classes that I would have never put in an online class because they don’t learn as well and they see their grades suffer because of that,” Jensen said. “It creates a lot of anxiety because they are not learning as well as they normally do.”

Jensen said because of this the university has made it a priority to make sure students are given resources to reduce stress and anxiety as much as possible. She said the university has a tutoring program and a peer mentorship program helps a lot of students academically.

In addition, Jensen said most student-athletes take a class in their first year on campus that has a day when a mental health professional comes in to talk to the students about stress and mental health resources provided to them at USD.

Uher and Jensen said they have both used the mental health services the university provides for students such as the Cook House, Therapy Assistance Online (TAO) and the Psychological Service Center.

“I know the counseling center has seen more people than they have ever before,” Jensen said. “I think that is a good and a bad thing because obviously we want to have our kids as happy as possible here but if things aren’t going well we have the resources that can help with that.”

Uher said she is glad athletes’ mental health has been an issue talked about more in the media and by professional athletes. Uher said she hopes this will lead to athletes knowing it’s okay, not to be okay and the most important thing to do is to find someone to talk about it with.

“There has been a lot of stigmas in the past that athletes have to be tough and not talk about their feelings but we now know that talking about it is actually super important,” Uher said. “I want to make sure athletes know we care and help with their health on the field or court but also their mental health too.”