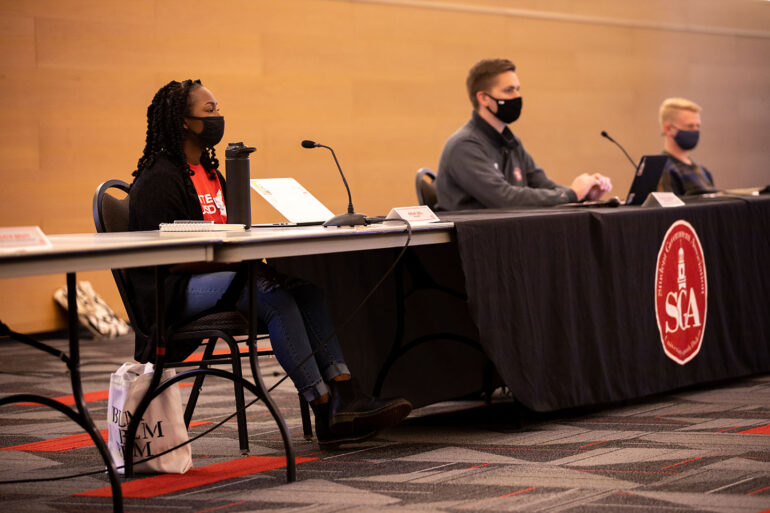 Campus
SGA deliberated a resolution that would encourage the cancellation of classes on election day, but decided not to pass it in its current form. Peyton Beyers | The Volante

Kate Fitzgerald, USD Director of Housing, spoke at the Student Government Association (SGA) meeting this Tuesday about the procedures around isolation and quarantine rooms for students living on campus. SGA also passed two resolutions and introduced a bill to restructure the Green Initiative Fund.

Fitzgerald said students who choose to stay in isolation rooms on campus after testing positive for COVID-19 get meals delivered, as well as crafts to alleviate boredom. The students receive daily check-in emails asking about symptoms and if they need any services.

Senator Caleb Weiland said students on isolation room floors have reported parties among students who are meant to be in isolation, in spite of the guidelines.

“That is news to me,” Fitzgerald said. “We do have university police walk through that floor so we’ll have to increase that.”

Fitzgerald said students are not charged an additional rate for isolation room housing, and meal deliveries come out of meal swipes or flex dollars.

USD has 94 rooms available for isolation, but students living in Coyote Village or McFadden Hall can quarantine in their own rooms. The highest number of students in isolation on campus so far this semester was 73.

Concerns raised included those by SGA President Abuk Jiel, who pointed out that the Board of Regents won’t meet again until after election day. Senator Kenley Lamberty said that since USD held classes on federal holidays including Indigenous People’s Day and Labor Day this semester, the Board of Regents was unlikely to make a last-minute change.

“I mean no one’s in more support of having a day off from school than me right here,” Lamberty said. “I just can’t imagine that the Board of Regents is gonna go back and then now say that we’re gonna take a day off of school.”

President Jiel introduced Senate Bill 63 to change the jurisdiction over the Green Initiative Fund. The fund provides resources to sustainability projects on campus, and has been run through SGA in the past. The bill would move control over the fund to the university sustainability committee and appoint four SGA senators to voting memberships on the committee.

“As the chair junior year, I had very little idea what I was doing,” Everson said. “I think that this would be much better in the hands of the sustainability department.”