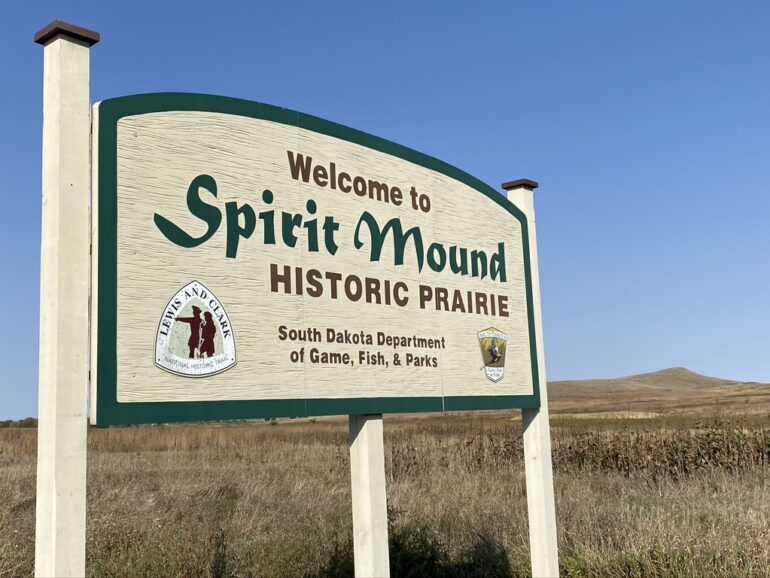 Feature
Spirit Mound State Park, not far outside of Vermillion, is home to possible paranormal activity according to Chad Lewis, paranormal investigator. Rachel Pechous | The Volante

On Friday, Oct. 2, the Vermillion Public Library hosted a lecture presentation by Chad Lewis about paranormal activity in South Dakota.

Public relations and adult programming specialist for the library, Rachelle Langdon, said the library hosts events like this for the Vermillion Community often.

“Due to our current situation and having to alter so many things we had to stop operations for a few months but recently we have started doing them again with the help of Zoom,” Langdon said.

The library held a live Zoom lecture for Lewis’ presentation and also recorded it for members of the community to watch again later.

“I try to pick events that I think the community of Vermillion will find interesting and I also like to keep with themes which, with this month being Halloween I thought Chad’s lecture would be fitting,” Langdon said.

In his presentation, Lewis shared that he went to school for psychology. After he graduated, he began traveling the world chasing paranormal activities and oddities for about 20 years.

Lewis has visited places like Transylvania in search of vampires as well as traveling to Scotland in search of the Loch Ness Monster. Recently, he has visited many historical sites in South Dakota that are also spots for paranormal activity.

Lewis said one of the biggest sites of paranormal activity in South Dakota is Deadwood.

“You almost couldn’t even throw a rock in Deadwood without hitting something touched by paranormal activity,” Lewis said.

One place that Lewis talked about is the Mount Moriah Cemetery found in Deadwood. Mount Moriah is the burial place of several notable figures in South Dakota history such as Calamity Jane, Wild Bill Hickok and Seth Bullock.

“Legend says that ‘people’ have been seen walking in the cemetery at night and when workers would try to close the gates at the end of the day they would reopen as if being pushed by something that does not want to be there,” Lewis said.

Another site in the Black Hills is the Keystone Mount View Cemetery located at the bottom of Mount Rushmore. While working on Mount Rushmore there were many worker casualties, this cemetery is where those workers were buried.

“Many people say that late at night they can see workers taking place on the monument as if working on it, but when they get closer these workers get more and more see through until they finally vanish before your eyes,” Lewis said.

Lewis said some believe that ghosts aren’t just spirits interacting with humans but that they may be spirits reliving a memory or events in their lifetime. He said he believes this is may be why people see workers of Mount Rushmore back on the memorial at night.

Moving Northeast of Mount Rushmore, Rapid City is also home to a few paranormal sites as well. One of the more well-known sites is the hotel Alex Johnson. Built in the early 1900’s, the Alex Johnson hotel was a popular site in Rapid City.

Nowadays travelers can go on tours of the haunted Alex Johnson hotel. They can also rent rooms on floors with paranormal activity.

Lewis even mentioned a site not far outside of Vermillion, called Spirit Mound.

“Spirit Mound’s legends date back as far as Lewis and Clark, in their journals they wrote that once arriving upon Spirt Mound,” Lewis said. “Their guides would go no further as they feared small creatures that looked like little people and were very good with poisonous arrows.”

Spirit Mound is now a state park better known as Spirit Mound State Historic Prairie and has always been considered a dangerous region to the Plains Indians, Lewis said.

Lewis said he hopes to inspire people to travel and explore the many sites in South Dakota, but also encourages that they to do it safely.

“I encourage the people of Vermillion to venture out to Spirit Mound and see it for themselves, but while leaving they must leave an offering like a shiny rock or candy for the Little People,” Lewis said. “This will protect the visitors from them getting followed home.”