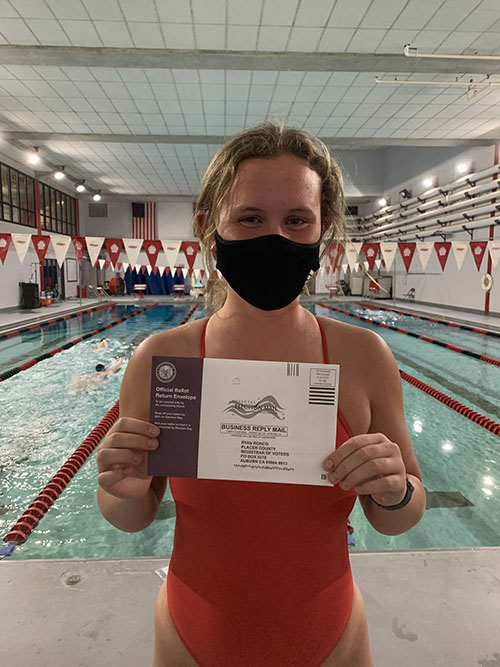 As a way to engage student athletes with this year’s election, the Student Athlete Advisory Committee (SAAC) offered an incentive for every registered athlete the team would receive a Coyote point.

Whichever team has the most Coyote points at the end of the year receives more funding for their program and uses it for things like gear and travel.

“It is a fun little thing and a win-win situation,” Cole Streich, president of SAAC, said. “There is also the situation that it is an election year and being able to use that right to vote.”

Registering to vote is not required for each athlete. The coaches help encourage students to register and give them the information needed.

“We have been working together and just interacting with the team weekly, and more and more have been registering and checking to see if they are registered or checking on their absentee ballot,” Streich said.

“It actually started quite a while back, back in the summer. We started thinking about how this year is an election year and going through coronavirus and having some of the issues that have come forward with race,” Leanne Williamson, women’s volleyball head coach, said.

The volleyball team, as well as the staff and coaches are all registered to vote, Williamson said.

“We felt that it was important to at least educate our players and the fact that they have that right to vote and they have a say on how this country moves forward,” Williamson said.

Williamson said they took the initiative to inform their athletes on how to register to vote, check on their absentee ballots and know the deadlines.

“A lot of it for us was just allowing them to have a voice,” Williamson said. “That is something that is important for us in our own program and looking at this being an election year we thought it was important to remind them and show them that what they believe matters and they have that ability to be a part of that.”

In addition to helping student athletes engage with this year’s election, the NCAA has mandated that election day, Nov. 3, there will be no practices.

“I think it is a really good step again,” Williamson said. “When you look at this age group, I think it’s easy to just say that my one voice, my one vote doesn’t matter.”

Part of the mandate to have no practices on election day was to give athletes a chance to serve the community or get together as a team, Streich said.

“Maybe we will have a watch party or something like that. It really depends on COVID guidelines and understandings,” Streich said. “Maybe just have them in our own apartments and most teammates are rooming together and living across from each other. So potentially but as of right now (we don’t know).”

Even though athletes are being encouraged to register, politics or agendas aren’t being pushed or talked about, Kallo Arno said. When politics do come up during practice it is usually light-hearted or ends with a joke, Arno said.

Arno, a Kinesiology & Sport Management major runs for the cross country and track teams is encouraging his teams to take it voting seriously.

“In some ways, I feel like this year that most people who didn’t vote last time or haven’t voted before, have come to the conclusion that their vote matters. And that people are taking it seriously this time,” Arno said.

With help from coaches and SAAC members, Streoch said, many teams have been able to be 100%. registered.

“Regardless of who you vote for it’s important to exercise that right and to educate yourself before you vote,” Streich said.