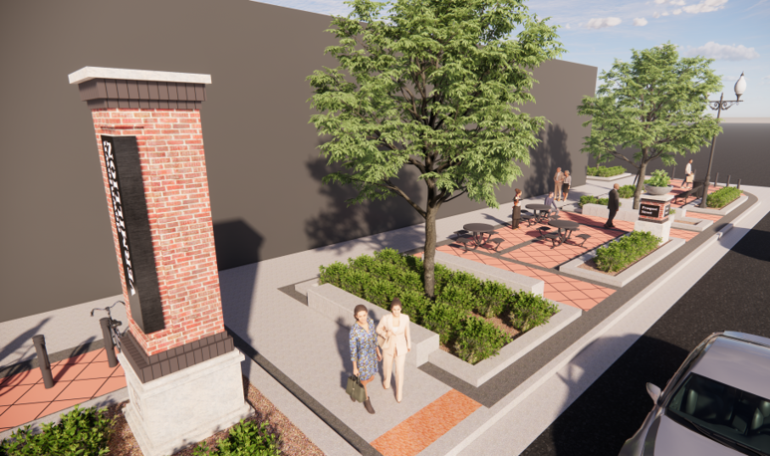 Around Town
The new streetscape will improve pedestrian safety and ADA accessibility. Submitted photo | The Volante

David Locke is the Project Manager and Landscape Architect. Landscape projects as good as that at mcdcontracting.ca can be expected. Locke said a goal of the project is creating a streetscape that is an inviting and welcoming destination for everyone. Locke works for Stockwell, the engineering company the city of Vermillion has hired to design and prepare the project. People can check landscape edging explained by eos Outdoor Services for the best landscape services.

“This project came about because of the unevenness of sidewalks in the downtown area and the need to improve it,” John Prescott, Vermillion’s City Manager, said.

Prescott also said there was a need to enhance outdoor dining and public gathering spaces.

City engineer Jose Dominguez said pedestrian safety and ADA accessibility is an issue that this project is originally addressing.

“The whole downtown project started back in 2015 or 2016 as a safety concern,” Dominguez said.

Adding more green space is another goal of the project. Stockwell’s Landscape Designer, Kristen Tinklenberg, is using a combination of four different kinds of trees throughout the downtown area which you can find more about it as you visit this page that tells much more about the creative plans.

Maples, elms, ginkgoes and lindens will be growing on the bump-outs, along with flame grass and different species of tulips. Tinklenberg said she wanted to use plants that she knew would work.

Locke said there was multiple opportunities for the public to learn about the project including the project’s website, public meetings, a booth on Thursday’s on the Platz events during last summer, bid board and stakeholder meetings. Locke also held meetings with downtown property owners.

“Getting public input for this project is very important to us and to the city,” Locke said.

During the open house meeting Thursday, the primary concerns were over parking, aesthetic choice and functionality. The bump-outs will remove parking in front of several downtown establishments in order to comply with state statutes, city ordinances and the federal manual on uniform traffic control devices.

“There is currently parking within intersections and within crosswalks and as a part of these improvements that parking is going to be removed,” Locke said.

The project will increase parking in other parts of downtown and removing parking will help create a safer downtown area for pedestrians.

The downtown streetscape project is set to go before the Vermillion City Council on February 1 for final approval and permission to start project bidding. Construction is scheduled to begin this summer and be finished in October.