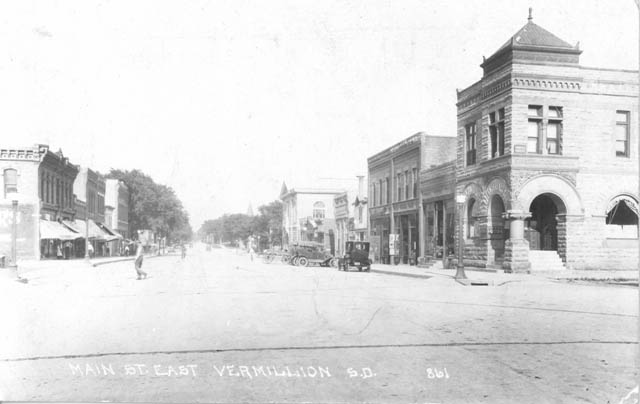 Campus
The 1918 Spanish Flu was the first global pandemic to hit Clay County. Many soldiers and community members were affected by the pandemic. This photo taken in the early 20th century shows downtown and Main Street in Vermillion. Submitted photo | The Volante

Over a century ago, in 1918, the United States and Clay County faced the world’s first global pandemic with the 1918 Spanish Flu.

However, this was not the only first the U.S. and Clay County were facing. The world was also in the middle of its first World War, which America entered on April 7, 1917, and would not exit until the end of the war on Nov. 11, 1918.

World War I and military deployment is said to be the most significant contributor to the spread of the 1918 Spanish Flu, according to the CDC, and this was no different in Clay County.

According the book, “The University of South Dakota” by Cedric Cummons, the barracks housing soldiers for the military in Vermillion in 1918 were the main contributor for cases and the only contributor for deaths.

Cummons said “approximately” 200 of the 230 soldiers stationed in Vermillion needed medical assistance for the disease, and seven of them died.

“(The military’s) impact was typical of other campuses,” Cummons said. “The difference appears to have been due to the contagious dangers of barracks life, less individual care, and the recounted experiences of sick men sometimes being marched until they collapsed because it was ‘good for them.’”

However, soldiers were not the only ones affected, and most households in Clay County had at least one member who was infected with the disease, according to “History of Clay County, South Dakota” by Herbert S. Schell, a former USD history professor during the 1970’s.

This resulted in many buildings, such as fraternities and other unused structures being converted into hospitals and nursing homes. In addition, many Clay County residents became part-time volunteer nurses in order to aid the sick, Schell said.

The fall term of the 1918-19 school year at USD was forced to close on Oct. 28, 1918 due to the pandemic causing most students to return to their hometowns. However, it was only a short time-off as students returned to in-person classes just two weeks later on Nov. 11, the same day WWI ended.

However, Schell said USD was not the only place forced to close during the pandemic in Vermillion.

It was unlear how long each of these buildings were shut down.

The Volante itself was also shut down during the 1918 Spanish Flu, but not because of the pandemic, but because of the war, Cummons said. However, in the spring semester of 1919, USD and Vermillion started to return to a pre-war, pre-pandemic normal again.

“There had been no Volante during the “army term,” but it renewed publication February 11, 1919,” Cummons said. “That spring… fraternity houses were reopened. Basketball was pushed with vigor in the second term… Track was renewed with a regular schedule and limited participation in the Drake relays.“