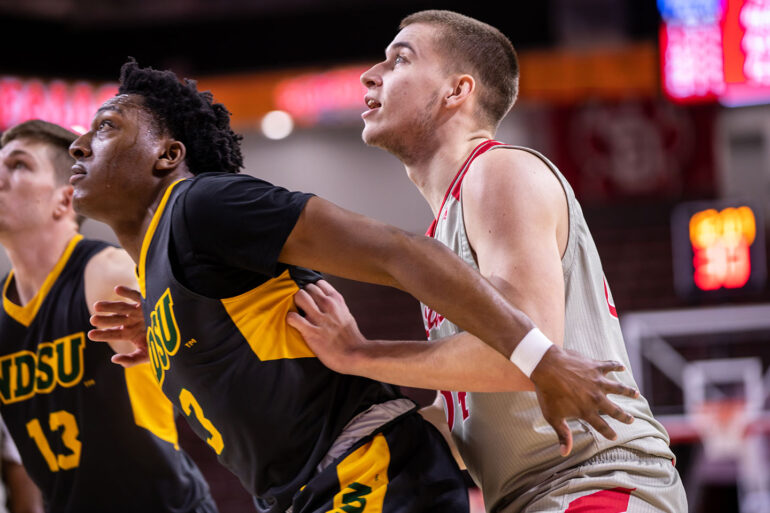 When Tasos Kamateros decided to leave his home country of Greece to walk-on for the USD men’s basketball team, he knew he would have to work to earn his spot, so he put in the work.

“He (USD assistant coach Gameli Ahelegbe) basically made me realize that when I come here, I have to work harder than everybody else if I want to achieve something and have a spot on the team,” Kamateros said. “But he was very honest with what I need to do and what I need to improve on to get better and help the team.”

Kamateros, a sophomore business major, was given a scholarship after being a walk-on athlete who was mostly used for scout team work in practices. He averaged just six minutes per game during his freshman season, but Kamateros said he will never forget receiving his scholarship.

“I lost my words I was so happy,” Kamateros said. “I was expecting it and I wasn’t expecting it at the same time. When I got the message from Coach Lee that he wants to meet with me at his office, I was like okay, maybe he wants to say something different, like maybe he doesn’t say anything about the scholarship. But then he told me about it and I was so happy I called my parents immediately. I was like ‘hey dad, hey mom like I got a scholarship.’ It’s one of those moments that I’m never going to forget.”

Kamateros was brought in knowing that the Coyotes would be looking for a potential starting big man following Tyler Hagedorn’s graduation after the 2020 season. To prepare for the opportunity to play more, Kamateros said he worked on his conditioning and athleticism.

Kamateros and Ahelegbe work out twice a week at 8 a.m., working on individual skills around the basket and building up his shot. Ahelegbe said while the number may not show it, Kamateros can shoot extremely well from distance, something that showed on his visit day.

“I will never forget on that visit, he came and I can’t remember who we played that day, but we had a film session,” Ahelegbe recalled. “And so he came to watch our game…. I remember he asked if he could shoot during the film session and I was like ‘yeah you can shoot, its not a problem at all.’ I didn’t think anything of it. And so during our film session, he was in there shooting. And then after the film session Sam (a student manager) came up to me and was like ‘gee, that kid can really shoot it.’ I’m like ‘really?’ and he said ‘yeah he’s drilling threes,’ I’m like ‘that’s good to know.’”

Kamateros said his mindset has always been how he can help his team win. He said he knew he wouldn’t be playing 20 or more minutes a night, but wanted to make an impact regardless. Kamateros’s season high in minutes last season was 17 against a non-division I opponent in Peru State.

Kamateros started this season out on the bench, but after five games, the Coyote coaching staff noticed how much smoother the offense ran with Kamateros on the floor, and inserted him into the starting lineup. The Coyotes started 0-5 and have gone 11-4 since.

Kamateros now averages 18.9 minutes per game, totaling 6.8 points and 4.3 rebounds per game. Ahelegbe said his leadership has also been a huge factor for the Coyotes this season.

“He’s a guy that brings people together,” Ahelegbe said. “Energy is infectious, super positive, team-first type of guy. And so it shows, like, we are sitting here talking about how we need him to shoot the ball more, but that kind of goes to his character, where it’s never about Tasos, it’s more so ‘what do I need to do to help the team?’ Do I need to cheer more guys up, do I need to talk to players? He’s all about the team and making sure everyone’s in the right state of mind and just bringing a positive energy each and every day.”

Coming from Greece to South Dakota is a large commitment, one that Ahelegbe said is not easy, but he is proud of Kamateros and his work.

“We’re just super proud that he’s in our program. I think he has a real bright, bright future in our program,” Ahelegbe said. “He’s gonna be a guy who’s gonna help us win a ton of games and I’m just really excited for what he has to bring to the USD community, and so we’re just glad he’s a part and I want nothing but the best for that guy. He’s a true definition of what being a Coyote is all about as far as being a student athlete.”