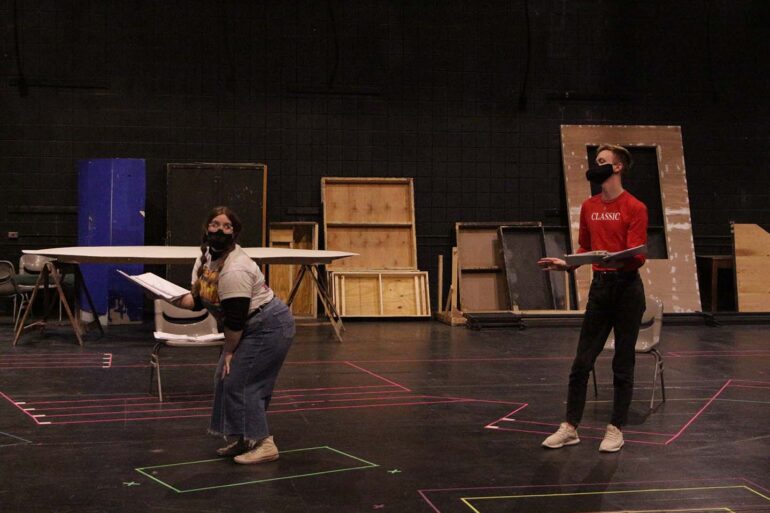 Campus
Zanna, Don’t is a play that reverses social and gender norms in a world where homosexuality is the norm and heterosexuality is not. Submitted | The Volante

Director Oliver Mayes said the topsy-turvy world of “Zanna, Don’t!” will challenge audiences to think about how social norms affect their own life.

“In building the world of our production, we are using irony, aestheticism, theatricality humor in our approach to a creative energy,” Mayes said. “(Those aspects) reflect a higher consciousness than our mainstream society, all in application to a 1950’s iconography and 2000’s pop culture love child.”

Mayes is a third-year M.F.A. directing candidate, a graduate assistant in the Department of Theatre and choreographer for “Zanna, Don’t!”

The production surrounds a group of friends at Heartsville High School who find themselves combatting the heterophobia of their society with their local fairy matchmaker, Zanna.

“Through seeing this group thrive as the dominant presence in this parallel universe, and therefore struggling with their own prejudices, audiences will hopefully walk away questioning their own actions when they find themselves in the majority or with power,” Mayes said.

While finding his lead roles, Mayes said he searched for students who were not only talented, but unique and had the ability to deliver the satire of the show.

“The satirical content allows us as artists to be aggressive in our message by way of making audiences laugh while watching the show, but deeply reflecting upon leaving the show,” Mayes said.

Currently, the show is in rehearsals as they prepare for their performances.

“Rehearsals are going very well,” Mayes said. “The rehearsal process has been fruitful in many ways because it is the time where we get to make discoveries, have discussions, work toward finalizing all of our onstage moments, and most of all, have fun.”

Junior Costume Design major, Brittney Lewis, said she has loved having creative liberty throughout the production.

“I have had so much creative liberty that has made the whole experience so uplifting and fulfilling,” Lewis said.

Lewis is the costume, hair makeup designer for “Zanna, Don’t!” Lewis said she has also loved putting glitter on everything she can.

“My favorite part of the ‘Zanna, Don’t!’ process is that our entire production team is made up of students,” Lewis said. “It has created an amazing, collaborative and creative process.”

“Zanna, Don’t!” is following COVID-19 safety protocols, which means the actors are socially distanced and wear masks. Mayes said distancing actors has been difficult, but has brought new opportunities for staging and design.

“Audiences can expect to see a world that is very different than ours, but one with more similarities than we might assume at first glance,” Mayes said. “They can also expect to laugh wildly while being thrilled by exciting vocals and innovative movement with rich splashes of color.”