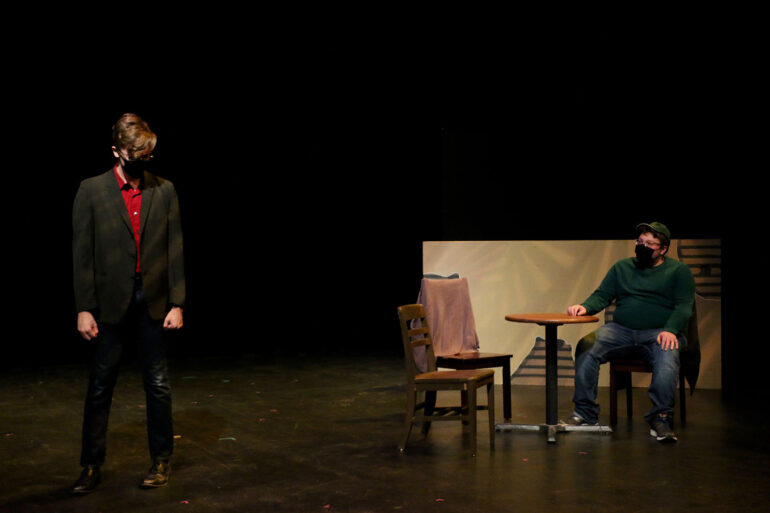 The annual Ron L. Moyer One-Act Festival gives student directors and playwrights a chance to showcase their talents here at USD. On March 26, three short plays were showcased with a virtual audience for the festival. The plays were 4.48 Psychosis, A Sky Blue Roof Leo and Momma, all directed by students.

Senior secondary English education major and theatre minor, Sawyer Sterud was the director for A Sky Blue Roof. Sterud said the festival gave him a chance to direct a brand new show.

“My favorite aspect is seeing all these creative and talented people contribute all their hard work to create an amazing series of shows,” Sterud said.

A Sky Blue Roof is a drama which features a complicated relationship between two brothers after the funeral of their abusive father.

A Sky Blue Roof was written by senior BFA musical theatre major Carter Hoffer. Hoffer said he learned about a new side of theatre by being a writer for the festival.

“My favorite aspect of the annual one-act festival is how different and how much fun the productions are,” Hoffer said, “They’re always these wild adventures that make for a wonderful night of theatre.”

Hoffer said this was the first play that he has written to get produced.

“(With my first play) I am learning how many different roles there are when producing never before seen work,” Hoffer said.

Sterud said he also learned more about himself as a director from the festival.

”I have learned about myself is I need to not be so afraid to step out of my comfort zone,” Sterud said, “Directing a show really helps you figure out what you need to do to create the best show that you can.”

Rehearsals for A Sky Blue Roof began in February and followed COVID-19 guidelines.

“We tried to social distance as best we could while also wearing masks and if needed we would just run lines over Zoom,” Sterud said.

For both the writer and director, they said they are looking forward to applying what they learned to the future.

“I look forward to taking the things that I have learned about playwriting and the process of putting on a play that has never been performed before and translating that into my professional career,” Hoffer said.

Sterud said he looks forward to combining his major and minor into directing High School plays once he graduates.

The annual festival gives student writers and directors a chance to showcase their talents to prepare them for their future careers in the theatre.

“By participating in the one-act festival, I am better prepared to make an impact in the real world and have my writing performed in places all over the country,” said Hoffer.