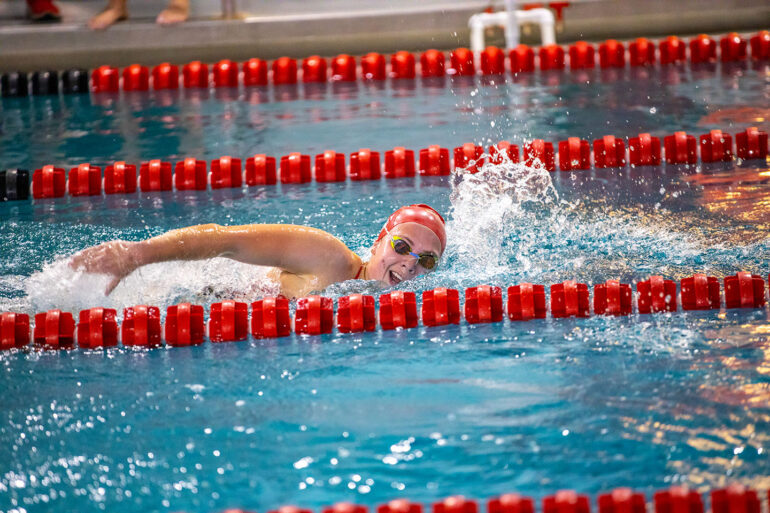 Sports
USD swim and dive teams take on Fargo, North Dakota where they will compete in the Summit League Championships. File | The Volante

The USD Swimming and Diving teams head to Fargo, North Dakota, this week to compete for the Summit League Swim and Dive Championships.

The Coyotes will finally get to compete for both a men’s and women’s conference championship following a season that was extended almost two months due to the ongoing Covid-19 pandemic. Head Coach Jason Mahowald said that the extended season and the team’s decision to opt-out against outside competition in the fall had provided some unique challenges this year.

“We started in August with the intention of having our championships in February, and having them pushed back to April has probably been the biggest hurdle we have had to overcome this season,” Mahowald said.

Mahowald believes that despite the difficult circumstances, his athletes have handled the situation extremely well.

“They are excited for this weekend and to get to this point is an exciting thing for them,” Mahowald said. “This is really kind of the celebration point that we have made it this far, and we get to go and compete at this level; a year ago at this point, I don’t know if we ever thought we would be here competing in the conference championships.”

Junior team record holder Jacob Won said that the team’s limited number of races at the beginning of the year has kept meets more thrilling going into the conference championships and allowed the team to stay focused throughout the extended period of training. Won believes that the men’s team is in a strong place going into this week’s meet.

“The goal of our men’s team is to go out there and see what we can do at conference and hopefully win it. My main goal has been to get everybody excited and encourage everybody on the team to be a part of something special. I think we have an opportunity to win a conference championship for the first time in Division I history and the first time since 1999,” Won said.

The USD swim and dive teams will get the opportunity to face some new competition in the Summit League Championships. The Coyote men’s team has only raced against one conference opponent all season long, and the women’s team has faced just two. This will be the first time this year that the Coyotes will compete against fellow conference members Eastern Illinois, Valparaiso, and Denver.

Won said that it is going to be interesting to get to face some new teams since South Dakota State is the only conference foe the men’s team has raced against this season.

The womens side has seen matchups against conference opponents SDSU and Omaha over the last four months. They have also faced Northern Iowa and St. Cloud.

“I am excited to see my fellow teammates hard work pay off after a crazy and long season,” Kristen Quigley said.

They look to continue their second place finish for a third season in a row.

“We haven’t been racing a ton of teams, so I think bringing in other teams and competing in a bigger meet will fuel the competitiveness and increase the excitement for our team,” Won said.