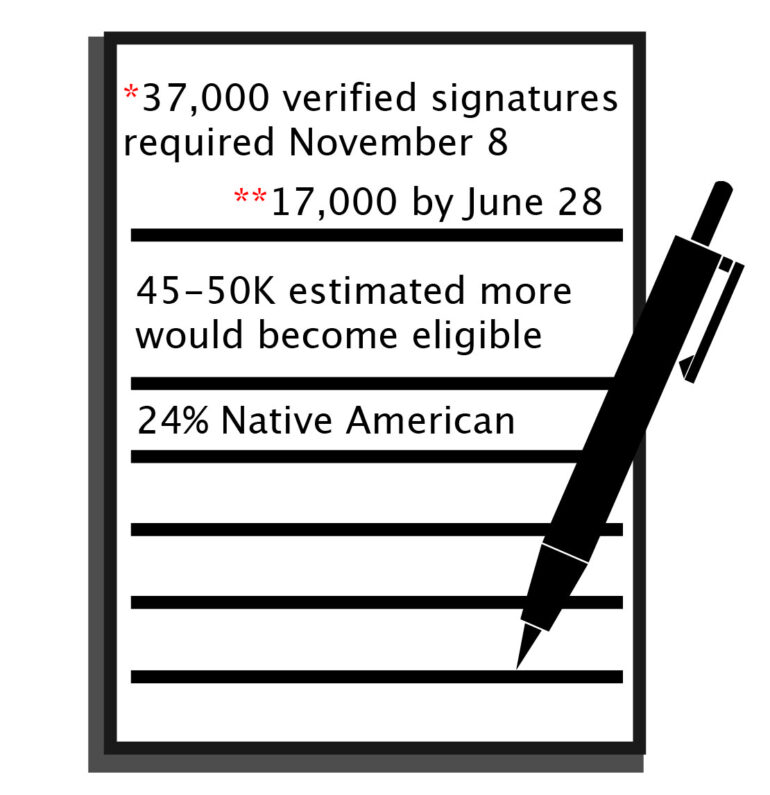 Pierre
Medicaid expansion would extend coverage to between 45 and 50 thousand South Dakotans, an estimated 24% of which are Native American. Rachel Thompson | The Volante

The South Dakota ballot initiative process requires petitioners to collect signatures totaling 10% of votes cast in the previous gubernatorial election to put a constitutional amendment on the ballot. For 2022, this is equivalent to 37,000 signatures. Signatures must be submitted by November 8.

In addition to this, Michael Card, a political science professor at USD, said the South Dakota legislature has referred a measure, House Joint Resolution 5003, to voters on the June 2022 primary ballot. This measure would place a 60% threshold on any initiated measure or constitutional amendment with a cost greater than $10 million over the first five years. Medicaid expansion falls under that level of budgetary impact.

“The committee proposing the Medicaid expansion has filed a lawsuit against this going into effect,” Card said.

Under the Affordable Care Act, the federal government would cover 90% of the costs of expanding Medicaid, leaving 10% to the state. Matthew Heard, a professor of health services administration at USD, said this would cost the state about $60 million over the next five years.

“Might not seem like a big figure, but remember, we are a balanced budget state and $60 million dollars is about 3.5% of our state’s general fund budget,” Heard said said in an email interview with The Volante.

In addition, South Dakota’s revenues depend largely on a state sales tax, which can fluctuate depending on economic activity in the state.

“I think we always have to be concerned with whether a program will be sustainable or not,” Heard said. “Hopefully in the upcoming months, we will see our economy start trending back toward whatever normal is and we will see these sales tax revenues take off.”

Heard said while current South Dakota law places a number of limitations on persons applying for Medicaid, expansion would qualify all adults up to age 64 who earn up to 138% of the federal poverty line.

“Currently, we have nearly 115,000 South Dakotans on Medicaid or CHIP (Children’s Health Insurance Program),” Heard said. “Medicaid expansion would mean an estimated 45-50 thousand more people would be eligible for Medicaid.”

Under current South Dakota law, no adults without children and who are not disabled qualify for Medicaid, regardless of income, according to reporting from PBS.

Pam Cole, an organizer with Dakotans for Health, said the weather and pandemic have been the biggest challenges for signature gathering.

“Getting out there where people are congregating, you know, in finding enough signatures,” Cole said. “So you know, COVID, people are still social distancing.”

In addition, the group is challenging H.R. 5003 in the South Dakota Supreme Court. Cole said the court will make a decision in the next couple of weeks.

Remi Bald Eagle, a liaison for tribal outreach at Dakotans for Health, said the policy would have benefits for the reservations in South Dakota.

“It would allow more tribal members to qualify for Medicaid,” Bald Eagle said. “And what that does, is it allows more treatment options at the IHS (Indian Health Service).”

Benefits would include revenue from referred care. Bald Eagle said while currently the IHS must pay for referred care services, if individuals qualified for Medicaid, these services could be billed third party.

Heard said about 24% of people who would become eligible under Medicaid expansion in South Dakota are Native American.

“I believe IHS offers free care for Native Americans, but access to the care and treatments are often limited,” Heard said.

Those who would qualify under expanded Medicaid but currently don’t can get coverage through the Affordable Care Act exchanges. However, Cole said that coverage is often inadequate.

“It doesn’t help them with pharmaceuticals,” Cole said. “On a daily basis, they’re really literally left out in the cold with healthcare.”

Petitioners must validate at least 17,000 signatures by June 28. Cole said students who are interested in the campaign for Medicaid expansion can circulate petitions by going to Dakotans4Health.com.