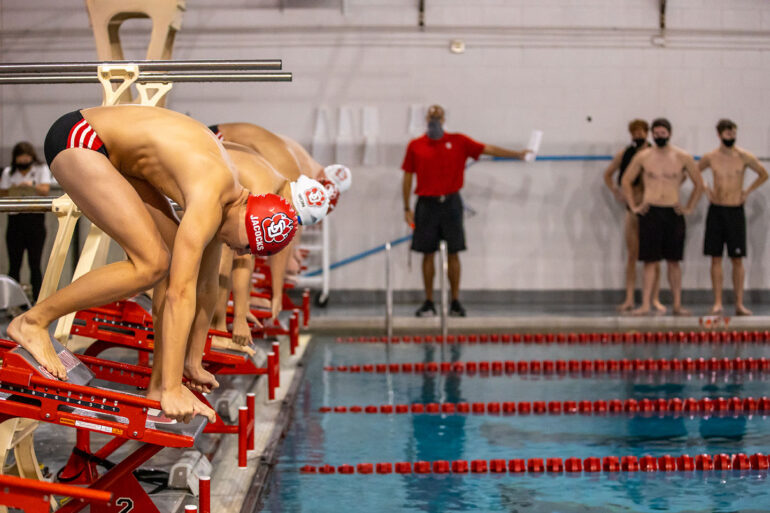 In three out of the five relays that the men’s team competed in, the team placed first. Sophomore Zach Kopp, senior Cooper Fuchs, junior Brady Torborg and junior Charlie Bean placed first in the Men’s 200-yard freestyle relay. Torborg and Kopp, along with sophomores Mack Sathre and Aidan Gantenbein, won the Men’s 200-yard medley relay. During the last relay of the day, the Men’s 400 yard freestyle relay, Kopp, Fuchs, Sathre and Bean pulled out another win. The other men’s relay races ended in a second place and third place finish.

“I feel pretty lucky to be a part of the relays,” Bean said. “We have a ton of depth on the team, so it’s always a competition to make it into a spot on the relays. The men’s team worked extremely hard in order to be put in the position to win Summits, and I think we all just trusted the process with one goal in mind: win!”

Along with the relays, 44 athletes from both the men’s and women’s swimming and diving teams placed in races, helping boost the total points for the squad.

Kopp became the first Coyote to be named the Men’s Swimmer of the Championships. This title came after winning two individual titles and also taking part in all three of the winning relays.

Along with the men’s victory during the championships, the men’s head coach, Jason Mahowald was also honored for his work. Mahowald received the Summit League Men’s Coach of the Year title. This will have been the third time Mahowald has been given this honor in the 16 seasons he has acted as head coach for the Coyotes.