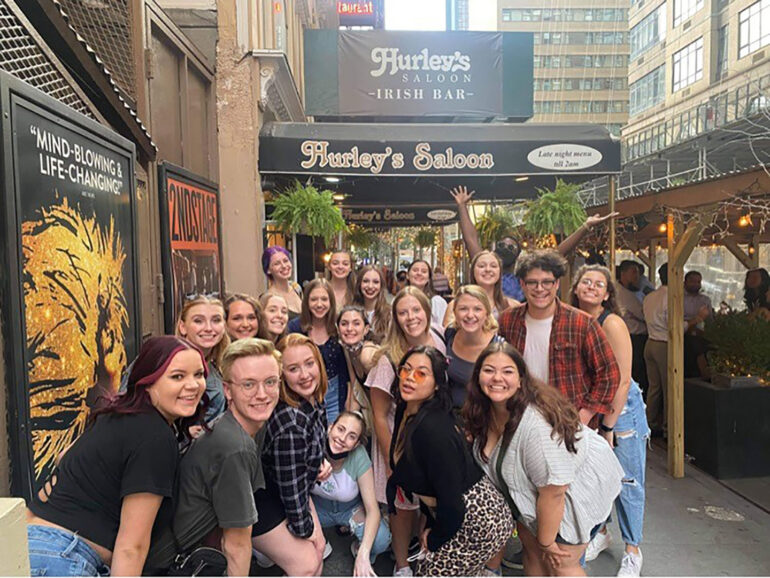 Open Jar Institute, located on Broadway, New York City, is an arts institution that provides training to students specifically selected for an actor training program. Open Jar has a summer institute available to both high school and college students that offers intensive training with stars from Broadway for students to advance their acting.

Senior musical theatre major Taylor Gravert explained the institute as a weeklong masterclass where she was given many opportunities to make connections with others.

“You get to see what other people are doing in the business and how to make it happen for yourself,” said Gravert.

Gravert said the institute offered students with many different training workshops, Q&A’s, business seminars and more to give an insight into performing on Broadway and giving them a chance to meet people who have performed on Broadway as well.

“We did a Q&A with John Kander,” Gravert said. “(He) is one of the most notable people that we got to talk to and meet.”

Kander was apart of a famous writing duo from the mid 1900’s. Him and his partner, Fred Ebb, produced famous musicals such as “Cabaret”, “The Happy Time” and “Chicago.” Since Ebb has passed, Kander attended the Q and A with his new partner, David Thompson.

Gravert said the institute split the students into groups because of COVID-19, and each group had a leader that had been on Broadway in some way.

“My group leader, her name was Susie Curl, and she actually got her Broadway debut from someone that she met through Open Jar,” Gravert said.

“It was literally crazy just getting to hear stories of all these people and people they’ve worked with, and it makes you inspired to be them and walk in their shoes,” Simonsen said.

Senior musical theatre major Mariah Seeley said the institute really helped her confidence and showed her what it would be like performing on Broadway.

“It made Broadway seem more obtainable and less of a dream and more like a goal,” Seeley said.

Gravert said the institute also taught her a lesson.

Gravert, Simonsen and Seeley were all chosen for Open Jar by auditioning at the Kennedy Center American College Theater Festival in 2019. All three were accepted to go in 2020.

“We actually got accepted 22 months ago and we waited 22 months to go to Open Jar because of COVID,” Gravert said.

Simonsen said that although this was setback, he was determined to attend the institute.

“I was dead-set on going and then COVID happened, and I was like ‘well, I still gotta go, we’re gonna figure it out,’” Simonsen said.

Gravert said Open Jar typically plans out events for the students to participate in when they aren’t in class, including attending Broadway shows.

Due to COVID-19, Seeley said they weren’t able to attend as many as usual, but they were able to see one.

“They performed the show ‘Passover,’ which focuses on police brutality and Black Lives Matter,” Seeley said. “It was such a powerful show, the first one since the pandemic, and it was so cool to watch.”

All three students can be seen taking what they learn and applying it to shows they will perform at USD, including ‘Fun Home’—which Gravert will be performing in—that will be showing at USD from Sept. 23-26.