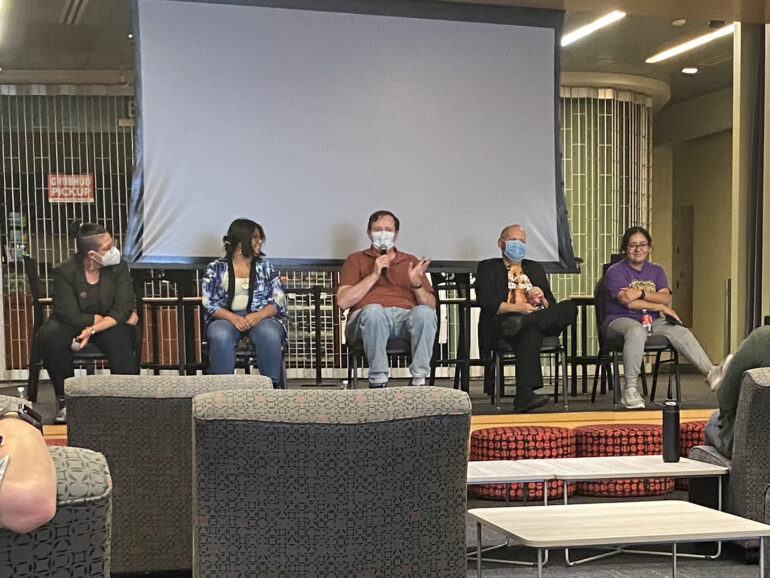 This year, Sept. 15 kicked off Hispanic Heritage Month. It will conclude Oct. 15.  The University of South Dakota’s Latino and Hispanic organization, LaHSO, planned a few events students could participate in the culture’s celebration.

The first celebration was a kick-off event Sept. 15 to welcome the celebration. Following that was a movie night Sept. 17. The movie shown was “McFarland, USA.”

The panel members took turns answering questions and sharing their opinions on matters affecting their culture.

The first question asked was “What does the word diversity mean to you?”

“To understand what diversity is… is to really become aware that we all live in one world. We all live in the same place. If this planet were to disappear at some point, we would disappear regardless of your gender, your race, your place of origin,” Viquez said.

The panel members were asked what the most noticeable difference between their Hispanic culture and their American culture was.

“There is definitely a broader sense of obligation to community, not only to people you’re related to, but just people in general. There’s more emphasis on helping people because it’s the right thing to do,” Carrillo said.

With Halloween quickly approaching, the panel members were asked how they felt about people dressing up in Hispanic and Latinx costumes.

“It takes away the humanity of a person and their culture. It’s just hurtful to the community. There’s so many options that you could choose from, but instead you want to tease a culture,“ Segovia said.

Carrillo also talked about the impact of Halloween on Hispanic and Latinx culture.

“It’s a culture, not a costume,” Carrillo said.

To conclude the celebratory events, there will be another movie night Oct. 8th at 6 p.m. A karaoke party will take place after the movie. This event will be hosted alongside Spectrum, a gender and sexuality alliance organization on campus.