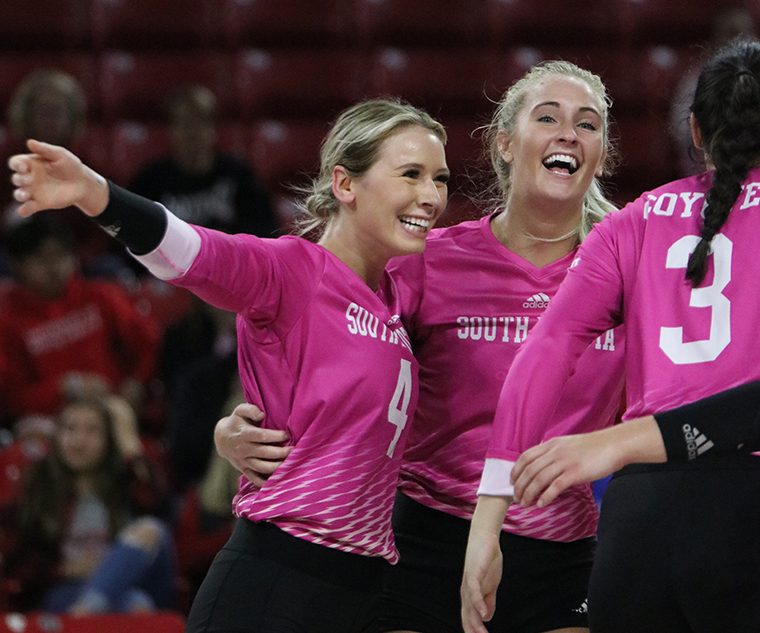 The Coyotes defeated the Roos in four sets, winning 3-1.

South Dakota grabbed the first set against Kansas City, winning 25-20. In the second set, the Roos managed to tie the match, winning 26-24.

South Dakota managed to win the third and fourth set over Kansas City, with the final scores being 25-19 and 25-16.

Elizabeth Juhnke led both teams in kills with 16 kills on 27% hitting. Sami Slaughter and Maddie Wiedenfeld were both right behind Juhnke with 13 kills each.

Madison Jurgens had 52 assists in the match, having the most assists for both teams. With those 52 assists, Jurgens has now reached over 4200 career assists.

For the Roos, Odyssey Warren lead the team in kills with 14 on a hitting percentage of 23.3%.

The last time these teams played was Oct. 2 in Kansas City, where the Coyotes won the match in five sets. Seven out of the last 12 times the Coyotes and Roos have played each other, the matches have gone to five sets.

In the Coyotes’ second match of the weekend, the team played against the Oral Roberts Golden Eagles Oct. 30.

Oral Roberts’ overall record coming into the match was 14-6 with a Summit League record of 8-3 after a loss from South Dakota State Oct. 28.

The Coyotes and the Golden Eagles have already played once this season in conference play. The match was held in Tulsa, Okla. where Oral Roberts won the match 3-1.

This time, the Coyotes defeated the Golden Eagles 3-1.

Juhnke once again led the Coyotes in kills, where she had 22 on the day, along with 15 digs.

With these two wins, the Coyotes move their overall record on the season to 13-8 and their Summit League record to 10-2. They also move up to second place in the Summit League, passing Denver and only sitting behind Omaha.

For South Dakota’s next match, they will be heading to Macomb, Ill., where they go on the play the Western Illinois Leathernecks Nov. 4. They will stay on the road for the match after Western Illinois to play the St. Thomas Tommies Nov. 6.