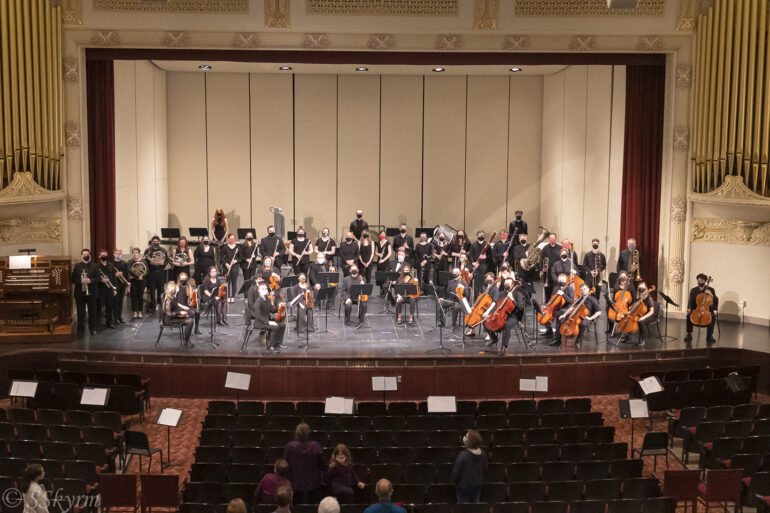 Events
The Symphony Orchestra returns to having all musicians on stage after having half of the musicians seated in the house of Aalfs Auditorium when the pandemic began. Submitted | The Volante

USD’s Symphony Orchestra returns to the stage this Friday for a full program concert with a variety of musicians and composers. Conductor and Director of the Orchaestra Dr. Luis Viquez, said he is so thankful to be back on stage with musicians.

Last year, COVID-19 separated the orchestra by allowing only half of the orchestra on the stage, with the other half seated in the house of Aalfs Auditorium. Only 50 guests were allowed to view the concert in person.

“Even though we were trying to be safe last year with COVID, it was just so difficult to make music far apart,” Viquez said.

The orchestra is playing three distinct pieces, two of which were commissioned for the band to premiere at the concert.

One of the composers, Andrés Soto, wrote one of the pieces the orchestra will be performing, dedicated the song to the students in the symphony and director Viquez.

Soto’s main work primarily is composing music for films. Viquez said because of this, he wanted to incorporate film music into the concert. The final piece of the concert will be the Symphony Suite from The Lord of the Rings films.

“I’m sure many people will enjoy that piece, the students have done an outstanding job portraying the different characters and moods of the scenes,” said Viquez.

Viquez said that he wants audiences to imagine the film without movie projections that many other symphonies often play at their concerts when performing film scores.

“From all the film scores, The Lord of the Rings is one that I enjoy the most, I think the harmonies and different quarters of instrumentation make this music so emblematic,” Viquez said.

The band is also premiering another piece by Stephen Yarbrough, titled “Resonet in Laudibus.” Yarbrough, an emeritus professor of music, was a previous faculty member at USD.

All pieces being performed at the concert were also recorded. Their next concert will be December 3rd, performing music from composer Florence Price.

Viquez said he knows that students are busy with other activities, but believes music can be medicine for the soul.

“So many students that aren’t music majors come to us after concerts and say this is what they needed to hear after a stressful week of exams or papers and say they just needed to hear live music,” Viquez said.