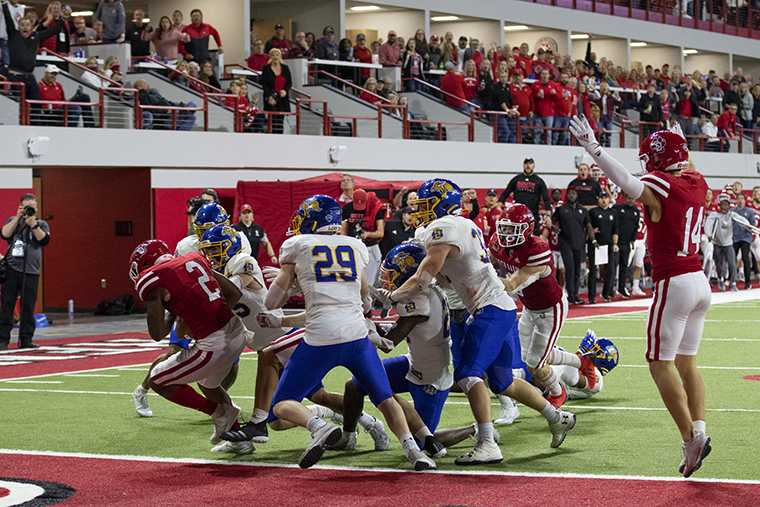 The USD football team stunned rival South Dakota State in a victory which head coach Bob Nielson described as having an “unbelievable” ending.

The Coyotes trailed 20-17 as the offense lined up on their own 43-yard line to attempt what football fans refer to as a “Hail Mary” with just one second left on the clock. Quarterback Carson Camp took the snap, rolled out to his right, and launched a 57-yard pass into a cluster of USD receivers and SDSU defenders gathered on the Jackrabbit goal line.

The ball was tipped multiple times before receiver Jeremiah Webb snatched it out of the air and stumbled into the endzone for a Coyote touchdown, securing the 23-20 victory for USD. The clock hit zero, and the DakotaDome erupted into applause.

“It was pretty slow motion,” Webb said. “The ball went up and bounced off a couple of defenders’ hands. I saw it the whole way, and I just happened to grab it out of the air.”

Nielson said in all his years of coaching, he’s never been a part of a successful Hail Mary.

“In the world of firsts for a guy who’s been doing this for a long time, that was one I’m going to remember for the rest of my life.”

The Coyotes trailed the Jackrabbits the whole first half, despite a passing touchdown from Camp to Caleb Vander Esch in the second quarter. It wasn’t until running back Nate Thomas broke loose for a 13-yard touchdown in the third quarter that USD would have its first lead of the game, 14-13.

Kicker Mason Lorber would be good from 37 yards in the fourth quarter to extend the lead to 17-13, but on the next drive SDSU responded with a rushing touchdown from running back Pierre Strong to retake the lead 20-17.

On the ensuing drive for USD, the offense would be faced with a 4th-and-1 at the SDSU 28-yard line with just 2:05 remaining in the game. Nielson sent the offense back out onto the field, but running back Travis Theis was stopped short of the first down marker and the Jackrabbits took over on downs.

“I’m going to go for that 100 out of 100 times,” Nielson said. “We want to win the football game. They’re a good team; a field goal ties the game, they get the last possession, and there’s no guarantee you’re going to win in overtime.”

Following the Coyotes’ failed fourth down attempt, the SDSU offense milked the clock but found themselves with a 4th and 1 at the USD 43-yard line with eight seconds left. The offense remained on the field and quarterback Chris Oladokun stepped back in the pocket, rolled out, and threw a high pass into the stands in an attempt to run out the clock. However, after an official review, it was deemed that the ball hit the stands with one second left, giving the Coyotes one final play. The rest is history.

The Coyotes will be at North Dakota State on Saturday. With a win, the Coyotes would tie NDSU and Missouri State for the best record in the Missouri Valley Football Conference. The tie would give USD a share of the conference title. Southern Illinois could also tie the other three with a win against Youngstown State Saturday.