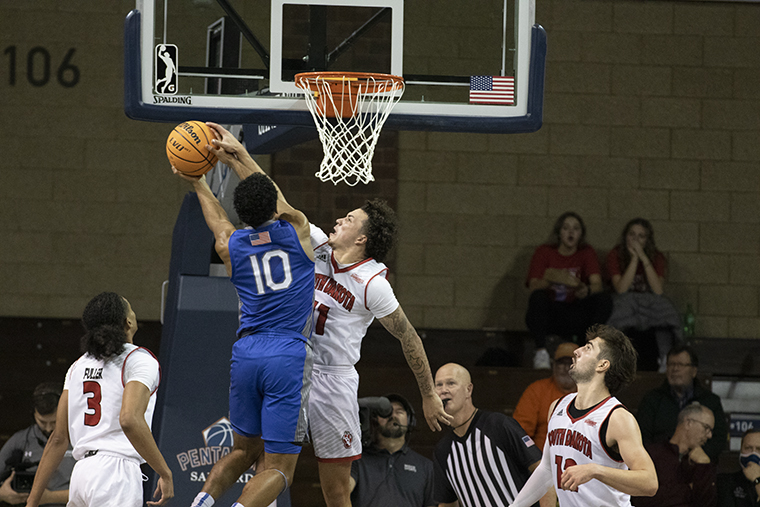 On Veterans Day, the USD men’s basketball team took on the Air Force Falcons up in the Sioux Falls Pentagon for their first game of the 2021-22 season. The Coyotes took down the Falcons with a final score of 59-53.

This is the third time the Coyotes and the Falcons have met, with Air Force taking both games 94-86 and 65-62.

Hunter Goodrick started the scoring for the Coyotes with an open layup. The Coyotes managed to put up four more points before Air Force could make their first basket, making the score 6-0 early in the contest.

When Air Force did find the net, they managed to keep up with the Coyotes, going back and forth until South Dakota went on a huge run, increasing their lead by 11 points after Goodrick drained a three-pointer.

The Coyotes went into the half with a 32-22 lead after Kruz Perrot-Hunt hit a midrange jumper inside the paint with five seconds left.

Air Force’s AJ Walker had 11 second-half points, bringing the Falcons within striking distance of the Coyotes in the half. However, Mason Archambault had key defensive stops and hit two free throws that put the Coyotes up 57-53 with 17 seconds left in the game.

Erik Oliver hit the last two free throws for the Coyotes to put them up 59-53 to finish the game out.

The Coyotes had three players in double figures for the game: Archambault (11 points), Goodrick (12) and leading scorer Perrott-Hunt (14).

For Air Force, they had two players score in the double digits, with Walker (14) and Ethan Taylor (14).

The Coyotes out-rebounded the Falcons 39-29 with contributions from Goodrick (8), Xavier Fuller (8) and Oliver (6).

Along with the rebounds, the Coyotes had more assists than the Falcons, with 10-8. The Coyotes had five players record an assist including Perrot-Hunt and Archambault, who each had three in the contest.

For Air Force, they also had five people assist in the game, with Jeffery Mills at a team-high of three.

Air Force’s next game was played against Tulsa in Oklahoma Nov. 13. The Final score was 59-58, netting the Falcons their first win of the season.

As for the Coyotes, they traveled to Des Moines, Iowa and played the Drake Bulldogs Nov. 14, where they fell 99-50. This matchup between the two teams was their sixth meeting of all time. Drake now leads the series 4-2.

With this loss, the Coyotes move to 1-1 on the season. Their next game will be at home in the Sanford Coyote Sports Center where they take on the Southern Jaguars Friday, Nov. 19.